The November 2014 Retail Sales report shows retail sales increased 0.7% for the month.  This is when gasoline prices have plunged, pulling down retail gas sales.  October retail sales were revised upward by 0.2 percentage points to a 0.5% increase.  Retail sales have now increased 5.1% from a year ago.  November's increase was due to auto sales, although other retail sales categories increased.  Without autos & parts sales, retail sales still increased 0.5%.   Retail sales are reported by dollars, not by volume with price changes removed. Total retail sales are $449.3 billion for November.  Below are the retail sales categories monthly percentage changes.  These numbers are seasonally adjusted.  General Merchandise includes super centers, Costco and so on. 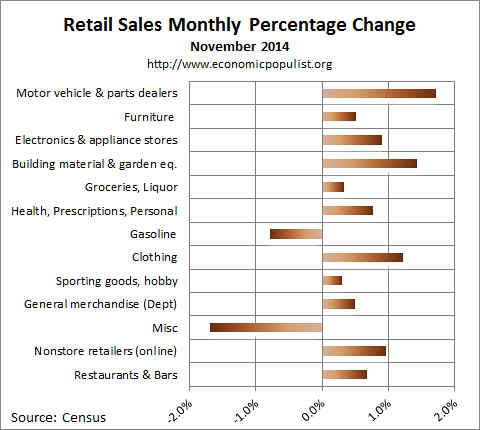 Below is a graph of just auto sales.  Kind of amazing, but motor vehicle sales have increased 9.5% for the year.  Autos have been going strong for some time now. Below are the retail sales categories by dollar amounts.   As we can see, autos rule retail sales.  We also see online retailers continue to expand. 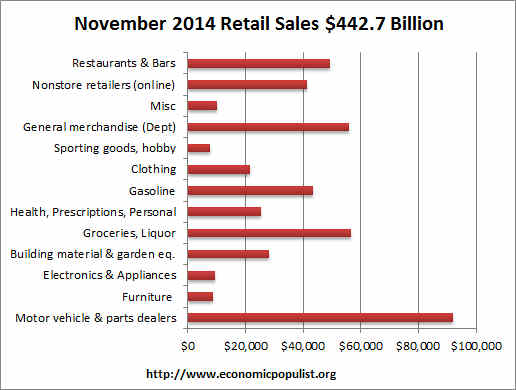 Graphed below are weekly regular gasoline prices, so one can see what happened to gas prices in November.  Believe this or not, but gasoline station sales are down -2.1% from a year ago. 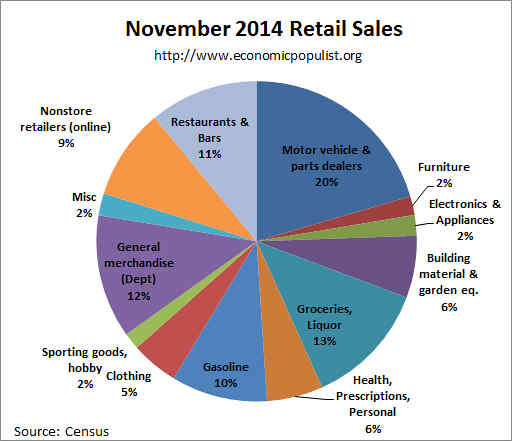 For the three month moving average, from September to November in comparison to the June through August average, retail sales have only increased by1.0%.  Gasoline looks like the culprit still as the bottom has fallen out of prices.  ;The retail sales three month moving average in comparison to a year ago are up 4.7%.  Overall as shown the below graph of quarterly annualized retail sales percentage change, up to Q3 2014. &nspWe believe gas prices have much to do with things. Seasonal adjustments are aggregate and based on events like holidays associated with shopping, i.e. the Christmas rush.  Advance reports almost always are revised the next month as more raw sales data is collected by the Census.  In other words, do not get married to these figures, they will surely be revised.  With that, Zerohedge reports November's seasonal adjustment is the 2nd largest in history.  We note that gas prices were collapsing at the last large seasonal adjustment in November retail sales.  Here is our retail sales topic category.

there's something odd about the seasonal adjustment in this report, which has been called out on Zero Hedge and on MarketTicker; my own quick calc show sthe year over year adjusted sales increase is +5.13%, while the unadjusted YOY increase is just 3.36%...last i checked, November was in the same season this year as last..

I'm not so sure in that I am thinking the drop in gas prices has something to do with the seasonal adjustment here. It's very high but it has been higher and one would think it would have been readjusted by now if it was really such an error...

unless of course we all believe D.C. is simply the Bureau of Lies, which,well...

sorry, i hadnt read your post to the end before i rushed to comment... and no, i dont buy the "bureau of lies" headline that karl denninger used, just that i thought his detailing or the year to year differences was pretty impressive...from what i've read about seasonal adjustments, they're generally based on the last five years of data, or at least somewhat more heavily weighted towards more recent seasonal results...thus the data for 2013 would have been adjusted in part using the recession years of 2008 and 2009, whereas the adjustment for 2014 would include the stronger sales of 2013...that could account for a large part of the discrepancy, without any conspiracy on anyone's part..

Fox News on cable TV today @ 10:30 am PST -- They say stocks are faltering because of low oil prices (because the global economy is slowing), and that this may be taking a bite out of our 401ks and pensions — and that U.S. oil producers may cut back, affecting jobs.

* Question: So are we damned either way — with either low oil prices or high oil prices?

Fox Business (last month) "With new technology such as hydraulic fracturing (fracking), the U.S. has been able to access large deposits of oil and natural gas that were previously unusable. Seemingly overnight, the U.S. has gone from one of the largest energy importers to one of the world’s largest energy producers. This has helped the U.S. to be less dependent on foreign energy sources as well as create thousands of new jobs. In addition, we can enjoy very low energy costs compared to almost anywhere in the world."
http://www.foxbusiness.com/personal-finance/2014/11/27/what-baby-boomers...

* Question: So what good is cheap and abundant oil if we get cheap gasoline for our cars and cheap heating oil for our homes, but then our retirement plans get screwed? Is “energy independence” a BAD thing because the oil companies operate for profit? Shouldn’t the energy companies be nationalized — and oil and gas be sold to U.S. consumers “at cost”?

I guess they have a long way to increase since auto sales imploded in 2008, but still how long can this go on?

bill mcbride's graph shows the recent history, and it looks like auto sales are peaking again, though it may have another year or so...
http://www.calculatedriskblog.com/2014/12/us-light-vehicle-sales-increas...

from an auto town, i've watched this boom bust cycle all my life, never could figure out why everyone goes out & buys new cars at the same time every six / eight years

in November, energy commodities were 6.4% lower while food prices rose 0.2% mostly on a 0.4% increase in food away from home...meanwhile, the composite of all commodities less food and energy commodities fell by 0.4%, so the deflator for most of retail sales other than food will be a large negative...

Low Prices at High Costs: On Wal-Mart's Destruction of the American Economy - 19286 reads
JP Morgan Chase to gets another reward for their theft - 25947 reads
Why the economy isn't recovering - 45549 reads
How Many Jobs in the Stimulus Bill Could Be Offshore Outsourced? - 23455 reads
Saturday Reads Around the Internets - It Pays to Do Your Homework - 12312 reads
House discusses 401k/IRA confiscation - 223598 reads
America's Payrolls add 146,000 Jobs for November 2012 - 17811 reads
March global oil surplus at 17.7 million barrels per day; 2nd qtr surplus to be at 6.2 million bpd despite OPEC-led cuts - 6091 reads
Everything You Ever Wanted to Know about National Health Plans ….and maybe more - United Kingdom - 15632 reads
How Many Jobs Are Needed to Keep Up with Population Growth? - 250365 reads