The World Bank's latest food price index is just three percent below its 2008 peak. Wheat and maize prices have gone up about 75 percent since last June. According to report, wheat increased 54 percent in Kyrgyzstan, 45 percent in Bangladesh, 37 percent in Tajikistan, 33 percent in Mongolia, 31 percent in Sri Lanka, 19 percent in Afghanistan and 16 percent in both Sudan and Pakistan.

Before you blame Ben Bernanke, watch the video below. The Al Jazeera new organization reports on cocoa hedge funds speculation and the resulting highest chocolate prices in 30 years.

How Out of Reality are Most Economists on Trade?

Angry Bear, in a tense problem, shows how out of reality most Economists have been and are on trade:

We have had free trade agreements for decades, China has had MFN status since the 1990s, and permanently since 2000. The pieces of the former Soviet Union, including the current oligarchy that is called Russia, have had that status since 1992. NAFTA, including its abhorrent Chapter 11, has been in force since 1994.

There has been a generation that has lived under "free trade." While an economist might successfully argue that the overall social benefit has been great—millions of Chinese parents become estranged from their children to make a better life, as it were—the retraining, redevelopment and all of the other assumptions economists make about ameliorating the transition to a new economy have been eschewed.

The Economist shows inflation in China might help with the U.S. trade deficit, but be wary. First they claim labor is mobile, uh, that is called global labor arbitrage. Labor is not a commodity, it is real people an economy is supposed to actually serve. People should not be considered mobile, as some thing one can dispose of like diapers, or trade like bushels of wheat. The Economist also refers to inflation in China not being a problem. According to The Economist, inflation would not cause a wage-price inflation spiral, since in so many words, the Chinese people have no rights and workers in China are glorified slaves. Glad to know slave economics is alive and well and touted as a great thing by the Economist.

Onto the main article point, inflation. The Atlanta Fed posted an incredible graph, comparing the China monetary base, it's growth, versus China's CPI (or inflation measure). The point of this exercise is to show China is manipulating their currency and inflation might help mitigate some of those effects. 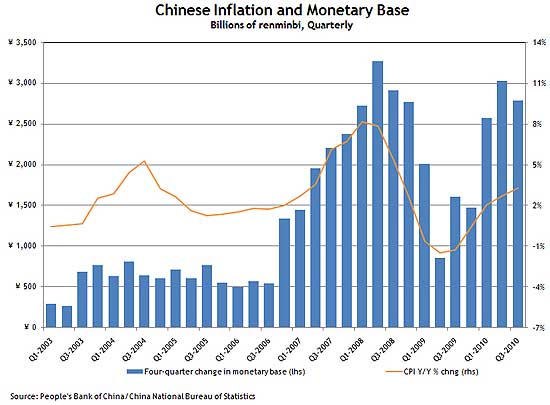 Think I'm Making This Up?

China has effectively banned the mention of exchange rates and currency manipulation at the G-20 to measure global imbalances.

at Chinese insistence there was no mention of the real effective exchange rate or of foreign currency reserves.

"Reserves have been dropped," Lagarde acknowledged, adding that the deal included a mechanism to take account of exchange rates when assessing the overall balance of payments.

Say what Bernanke gets a Who's Your Daddy Now. America, pass that currency manipulation with corresponding broad tariffs bill.....before it's too late.

As Matt Taibbi asks in his article, Why Isn't Wall Street in Jail, we have one of the most egregious offenders, Angelo R. Mozilo, CEO of Countrywide, now walking away scot-free, and bonuses to boot.

The closure of the case after two years of inquiry follows last October’s settlement by Mr. Mozilo of insider trading allegations made by the Securities and Exchange Commission. Regulators had contended that Mr. Mozilo sold $140 million in Countrywide stock between 2006 and 2007 even as he recognized that his company was faltering. Countrywide and Bank of America paid $45 million of Mr. Mozilo’s $67.5 million settlement, and he was responsible for the rest.

Millions have lost their homes, their financial lives destroyed, yet this is the punishment for those who perpetuated the crimes.