This comes by way of Naked Capitalism. Economist Michael Hudson has some suggestions.

Seems the banks are quite upset over a leaked draft of the Volcker Rule:

The Volcker Rule proposal defines proprietary trading, offer limited circumstances under which a bank could invest in a hedge or private-equity fund, and require banks to install internal controls to ensure compliance with the rule. The Federal Deposit Insurance Corp. is set to release proposal on Oct. 11.

The actual draft is here (pdf).

The Volcker rule is supposed to stop banks from proprietary trading, or trading in their own securities, derivatives, financial instruments for profit. The idea is to not allow banks to put depositors, their customers money at risk in fancy trading games.

The proposal includes a series of exemptions for trades designed to hedge credit, interest rate or other specific risks. A bank could be free of the Volcker restrictions if it is hedging a specific position or a portfolio of risks across multiple trading desks.

Hedging trades would need to have a “reasonable,” not a full, correlation with the underlying risk. Banks could also win exemptions if they are hedging a risk they are “highly likely” to face in the future.

The draft rule also would exempt trades related to market- making as long as the activity met at least seven standards, or principles. One principle would be that traders get paid from fees and the spread of the transactions rather than the appreciation or profit from their positions.

More evidence that U.S. companies are offshore outsourcing instead of hiring Americans. The India BPO business is booming. Sure they'll hire a few token Americans to disguise what's going on, but make no mistake, this is India preferred for jobs in the U.S., through manipulation of the U.S. immigration system. And yes, Americans have the skills for these jobs. There is no tech worker shortage or skill shortage.

Indian firms, which have become major IT players by taking on basic computer work from overseas clients, are adding staff even as their customers in Europe and the U.S. are forgoing domestic hiring.

This is why confronting China on undervaluing their currency is key critical to U.S. jobs. There are reports that U.S. manufacturers are bringing jobs back from China to the United States.

The Boston Consulting Group estimates that the trend could cut the US’s merchandise trade deficit with the rest of the world, excluding oil, from $360bn in 2010 to about $260bn by the end of the decade. The shift would also reduce its soaring deficit with China, which reached $273bn in 2010 and has triggered an intense political controversy over China’s exchange rate policies.

Krugman and fellow economists like Stiglitz, as well as other members of Obama’s initial finance team who favored aggressive financial services industry reform like Paul Volcker, may finally be in a position to exert real influence. But for every one of them, there are at least 50 members of the hackocracy. I think OWS is best served on building on its current momentum, getting more followers and extending its reach, since the dangers of elite capture are serious. There is nothing more that the orthodoxy would like to do than neuter the aims of OWS via inside the Beltway dealings and negotiation of hard to understand legislative fine print.

Dylan Ratigan is Pushing to get Money out of Politics

They have drafted a constitutional amendment to get money out of politics and have put up a petition requesting you sign. Who can argue that our government should not be for sale to the highest bidder?

This image comes way of Ritholz: 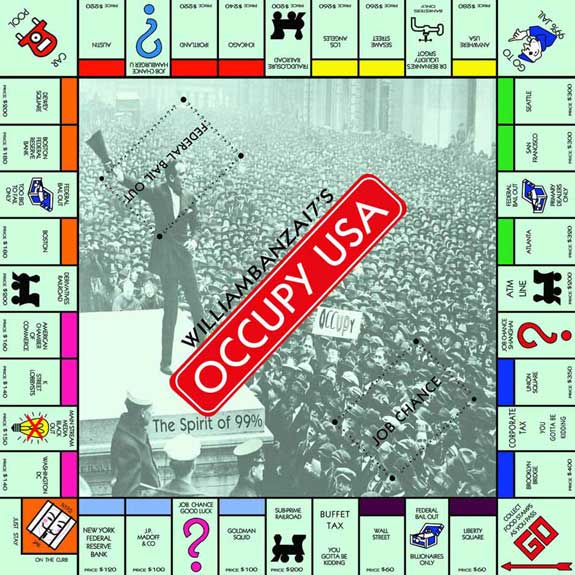 It's from Visual Combat by William Banzai.

Tax Justice Network has an overview on a GAO report which shows big problems with Treaties when trying to stop offshore tax havens:

“The Subcommittee’s work has exposed how bankers, financial advisors, attorneys, accountants, and others deliberately help taxpayers hide assets in foreign jurisdictions to evade taxes,” said Levin. “It is a global problem, and tax officials need to be able to get the client lists of the institutions and professionals facilitating offshore tax evasion. Limiting tax information exchange to instances where taxpayer names are already known is not enough. International tax agreements need to assist, rather than create obstacles to, the exchange of tax information critical in combating offshore tax abuse.”

GAO Conclusions. GAO concluded that the IRS did not assemble or make use of key performance data that could be used to improve its tax information exchange system. GAO recommended that the IRS identify, collect, and analyze needed data, and the IRS concurred.