We told ya so, yet people don't listen. The Federal Reserve FOMC meeting minutes were released and showed no quantitative easing for you.

Here is the money shot from the FOMC minutes:

A couple of members indicated that the initiation of additional stimulus could become necessary if the economy lost momentum or if inflation seemed likely to remain below its mandate-consistent rate of 2 percent over the medium run.

The FOMC has 10 voting members. The news is clear, those in favor or more quantitative easing are now 8 to 2 and if and only if the economy goes further into the tank.

Nevertheless, the staff continued to forecast that real GDP growth would pick up only gradually in 2012 and 2013, supported by accommodative monetary policy, easing credit conditions, and improvements in consumer and business sentiment

We're sure some will hold out hope against hope that more quantitative easing will happen. After all there are two members of the FOMC leaving the door open on more quantitative easing if the unemployment situation gets worse. That said, the next time you see some major investment group claiming QE3 is sure to arrive, check their interests and why that group is making such a claim. Alternatively just read us, we sure knew QE3 was not gonna happen.

Tin climbed the most in almost four months in London as prospects of low U.S. interest rates at least until 2014 boosted speculation of increased demand for the metal used in mobile phones, plasma screens and cars.

Gold bugs are also going nuts and most commodities have jumped in prices, almost overnight.

There was a one two three punch by the Federal Reserve. First the FOMC announced uber-low interest rates until 2014.

The Committee expects to maintain a highly accommodative stance for monetary policy. In particular, the Committee decided today to keep the target range for the federal funds rate at 0 to 1/4 percent and currently anticipates that economic conditions--including low rates of resource utilization and a subdued outlook for inflation over the medium run--are likely to warrant exceptionally low levels for the federal funds rate at least through late 2014.

Members of the Federal Reserve’s Open Market Committee woke up earlier this week to find a dead fish placed on the steps of the Marriner Eccles building in Washington. Everyone knows this is a traditional Mafioso warning to the recipient that they are soon to be “sleeping with the fishes”. But who would have the audacity to so-crudely threaten the distinguished and eminent governors and presidents of the Federal Reserve System? How about those masters of intimidation and economic terrorism, the Republican Leadership in Congress.

Yes, the warning came collectively from Mitch McConnell, Jon Kyl, John Boehner, and Eric Cantor, in the form of a letter to Fed Chairman Ben Bernanke ordering him not to institute any more monetary easing. The timing was exquisitely deliberate: a day before the FOMC was due to meet to discuss monetary policy and – according to many insider reports – vote to approve some new form of Quantitative Easing.

The letter didn’t exactly say that if the Fed voted for more monetary stimulus the august members of the FOMC would find cement blocks placed around their feet, but it didn’t need to. These are the same Republican leaders who just recently threatened to throw the United States into default if they didn’t get their way. They’ve already got cement blocks placed around the feet of Barack Obama, so they’ve certainly established their bona fides for murderous thuggery.

Early in his tenure as Chairman of the Federal Reserve Board, Ben Bernanke promised to make the workings of monetary policy more transparent. By golly – that’s exactly what he’s done! We no longer read the minutes of the Federal Open Market Committee as if they contain hidden messages as to where policy might go in the future. We even bother to notice who is voting which way; gone are the days when every vote had to be unanimous because any no vote would be considered the equivalent of stabbing the Chairman in the back. These days, the people who vote no want their name out there in bright lights and their reasons spelled out in glorious detail.

The minutes released this week for the August FOMC meeting are a treasure trove of transparency. There is so much transparency because these people at the FOMC don’t know what to do. Some want more Quantitative Easing, but they don’t agree on the form it should take: add even more securities to the Fed’s gargantuan balance sheet (now equal to 4% of the entire GDP of the economy); or, sell some short term securities and buy long term securities in order to manipulate long term rates lower, yet keep the overall Fed balance sheet total unchanged. 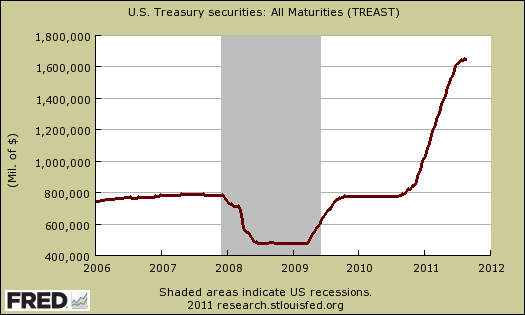 Federal Reserve Chair Ben Bernanke gave his long awaited Jackson Hole speech this morning. Now all are reading between the lines on whether more quantitative easing will be done and picking apart every single word as if Bernanke speaks in cryptography.

First, here is the speech paragraph that will generate quantitative easing, or QE3 buzz:

In addition to refining our forward guidance, the Federal Reserve has a range of tools that could be used to provide additional monetary stimulus. We discussed the relative merits and costs of such tools at our August meeting. We will continue to consider those and other pertinent issues, including of course economic and financial developments, at our meeting in September, which has been scheduled for two days (the 20th and the 21st) instead of one to allow a fuller discussion. The Committee will continue to assess the economic outlook in light of incoming information and is prepared to employ its tools as appropriate to promote a stronger economic recovery in a context of price stability.

Clearly QE3 is still on the table from this speech.

A week ago we outlined here how and why Ben Bernanke lost a significant vote in the recent Fed Open Market Committee meeting. The vote was not so much to launch immediately QE3 when QE2 comes to an end this month; it was to keep Quantitative Easing as a tool in the Fed’s arsenal of monetary weapons. So far, the mainstream media have not yet realized how significant a shift this is in Fed policy, but other bloggers are beginning to notice, and so is the stock market. Yesterday Chairman Bernanke spoke at the International Monetary Conference in Atlanta, at which he made no mention of Quantitative Easing now or down the road sometime. The stock market certainly reacted to this omission; having traded noticeably higher during the day, the Dow Jones industrial average closed down 19 points, losing most of its ground in the last fifteen minutes of the session when Bernanke began speaking.

Here are some perceptive comments about the speech from Cullen Roche on his Pragmatic Capitalism website:

*His speech was certainly market moving and as reports of the speech hit the wires the equity markets began to reverse on fears that QE3 is off the table. But there was a more interesting tone in his speech today than we’ve seen in the past. The Chairman was exceptionally defensive. In fact, the entire speech is basically an explanation as to why QE2 did not hurt the economy (of course it did).