To gauge the impact on the labor force data, the Bureau of Labor Statistics uses special tabulations of December data that incorporate the new population controls. When applied to December 2011, the updated controls increased the estimated size of the civilian noninstitutional population 16 years and over by 1,510,000, the civilian labor force by 258,000, employment by 216,000, unemployment by 42,000, and persons not in the labor force by 1,252,000.

Below is the table from the breakdown of population adjustments added to the end of the year for age brackets:

The next thing to notice is how the civilian non-institutional population of people between the ages of 25-54 actually dropped. That too is shocking, although the last of the baby boomers are now 50 years old. Plus we have illegal immigrants counted into the Census and supposedly border hopping is at a 40 year low.

Finally the biggest shocker is the increase to the non-institutional population of people age 55 and older by 1,288,000 with the incorporation of the 2010 Census population adjustments. The civilian labor force of those 55 or older also increased by 565,000 and gives a labor participation rate of 43.9% for just the population controls adjustment data alone. The 55 or older group also added 723,000 to the not in the labor force population group. Civilian non-institutional population means this group of people are not in nursing homes, in hospitals or otherwise incapacitated. It does include the retired. 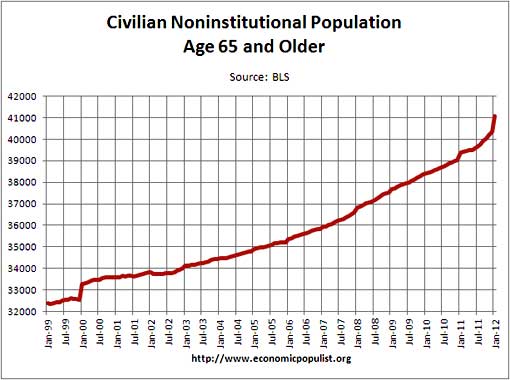 In other words, one of the reasons the not in the labor force increase is legitimate, was a disproportionate increase in population of those 65 years and older. Blame the boomers.

Additionally the number of people age 55 to 64 years who entered not in the labor force from December to January was 300,000 or 39% of the civilian non-institutional population increase for this age group, which also includes the population controls. Yet the January labor participation rate for ages 55 to 64 is 63.9%, not seasonally adjusted. This implies a 61% labor participation rate for the 55-64 age bracket in the 2010 Census data population control adjustments only. 685,000 of the 721,000 December to January increase in age 65 or older civilian non-institutional population was categorized as not in the labor force, as expected.

That said, don't let anyone claim people are not dropping out of the labor force due to not being able to find a job and aren't being counted any longer. You cannot blame an aging population or education on the below declining labor participation rates for those between 25 and 54 years of age. 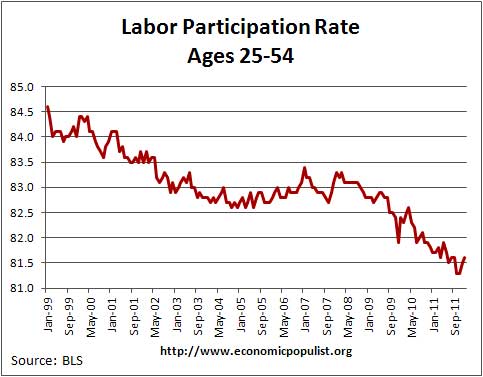 The ages 16-24 population control adjustments are also shocking. Almost all of the additional civilian non-institutional population found via the 2010 Census adjustment went into not in the labor force, or 80.6%. This gives a 19.4% labor participation rate just for the population controls adjustment. The labor participation rate for people ages 16-19 is 33.4% (30.8% not seasonally adjusted). For ages 20-24 it's 71.1% (unadjusted for January it was 69.8%). The labor participation rate for 16 to 17 year olds is 21.2% (18.3% not seasonally adjusted). It's hard to believe the 2010 Census simply located a city of juvenile delinquents they must have missed somewhere, in spite of falling high school graduation rates.

Voilà, the seemingly bizarre result from incorporation of 2010 Census data is explained and unfortunately for conspiracy theorists, it all appears to be statistically legitimate. If people still want to blame the government, then it must be the Census. The Census are the ones who update the demographics of overall population, who claim there is a whole tribe of Hispanic teenage girls, way more women in the U.S., and a hell of a lot of retired old people lurking around somewhere than the 2000 Census with population growth adjustments would predict.

The overall difference between the 2000 Census and 2010 Census is:

All data for this article was obtained from the BLS and the Census.

Plug in the above table numbers and you'll see the labor participation rate for just the population controls is -137% for ages 25-54.

Nice work. Thank you for your time and effort.

For those who do econometric modeling, we have to have time series. So when I was at Global Insight (WEFA) we had to create our own labor force numbers to smooth out the spikes and put the numbers as best we could into the years they belong. WISH the BLS would do this for us...

No kidding! Thank you for the compliment also. I don't get why the BLS doesn't apply some sort of smoothing filter or algorithm to redistribute the yearly adjustments backwards, monthly proportionate.

It makes no sense to me considering we have benchmarks, SA and birth/death to not go ahead and do this also.

Although if they did I might have less to write about. ;)

Simply great work. not just this post but all the hard work you put in here is as good and mostly far better than anything I used to see while in the fold of the IB world. People should be paying you for this stuff. Keep up the good work.

on the upper right corner. Thank you, no kidding I should be paid, this one was a bitch. The Census website is truly an exercise in "Where's Waldo" and I thought the BLS data layout was horrific, pales in comparison to finding data from the Census resources.

Folks, if you want to question this, point out a mistake, doubt this exercise for the reader article, please leave a comment. This article is making it's viral way around the Internets, but unless someone posts a comment here, I will not see the criticism, mistake (typos!) or confusion or whatever it is that's an issue.

I ended up going through some algebra (and I'm sorry, any more mathematics than this, I'm going to have to create a full bore white paper!) just to give some validity to at least one of the calculations used to conclude the BLS was aok. The reason I updated the article so much is I was informed of it being blasted elsewhere.

Look, math is math and statistics are statistics, so I'm more than happy to discuss, make corrections or whatever, but I need you to post some comment where I will see it.

Happy Algebra (I was not going to write up in LaTex all of those Algebraic steps, just trust me if you don't follow)! ;)

Econbrowser, Chinn, went ahead and ran the X-12-ARIMA algorithm on the NSA time series and graphed it all up. So, those claiming seasonal adjustments are this horrific mystery are basically disproved.

Chinn is hard to read but basically he did as an exercise the "by hand" seasonal adjustments via code you can find easily on the Internets to the BLS not seasonally adjusted data and shows how it's spot on.

It's a lot of work to run the code, get the new data series and graph it all up so you might check it out. Chinn is pretty dog gone good and he's a WI-Madison economics professor.

Corporate Profits Soaring Thanks to Record Unemployment - 77854 reads
Safeway Skewered for Throwing 6,000 Workers Under the Bus in Video Parody - 333414 reads
The de-industrialization of the U.S. - 55207 reads
Cap & Trade - New Derivatives Market for Wall Street - 19072 reads
When the economic barrier of color was broken down - 8781 reads
California is officially flat broke - 95471 reads
The Cost of Left-Wing hate - 117691 reads
The Great Double Dip Recession - 28420 reads
Will the NY Attorney General Bring Doomsday Charges Against Wall Street? If So, How Long Will He Survive? - 1151792 reads
The war on the middle class - 213712 reads