ADP is reporting a stable hiring and this as average job growth of the last year.  Steady as she goes was quoted by Moody's.  One odious comment claimed manufacturing recovered, uh, no they have not, they reserved their ADP jobs losses from last month.

If one tallies up the ADP jobs by sector reported, financial, construction, manufacturing, professional/business and trade/transportation/utilities, they had up to 100,000 jobs for this month.  It appears that ADP does not report on the biggest jobs growth, food and restaurant workers.  These are jobs within the service sector and are most often the lowest paying and also part time.  Below is a graph of those jobs left over from the ADP employment figures after subtracting off these five sectors:  financial, construction, manufacturing, professional/business and trade/transportation/utilities.  ADP reports 7.075 million private sector jobs have been added since January 2010.  There has been a 2.942 million job gain in those sectors not broken down by ADP.  That's 41.6% of the jobs ADP reports as gained where we have no clue on what types or sector gains they are in.  For a reference the BLS gives a 7.31 million private sector job gain of the same period. 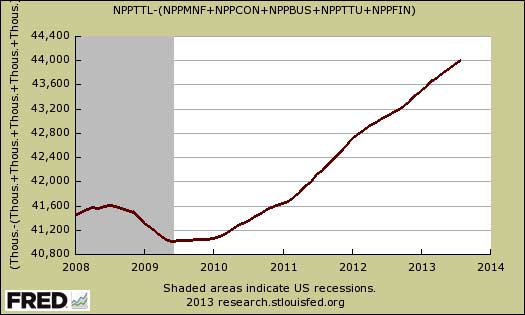 ADP reports payrolls by business size, unlike the official BLS report and this month growth was across the board.  Small business, 1 to 49 employees, fueled the private payroll gains by adding 71,000 jobs with establishments having less than 20 employees adding 40,000 of those jobs.  Notice they count businesses with one employee.  Medium sized business payrolls are defined as 50-499 employees, added they added 74,000 jobs.  Large business added 32 thousand to their payrolls.   If we take the breakdown further, large businesses with greater than 1,000 workers, added 27,000 of those large business jobs.  Thing is, we do not know if those are American workers or foreign guest workers on Visas and this time of year brings in more foreign workers due to the H-1B Visa issuances earlier in the year.  Other metrics showed multinational corporations are not hiring Americans, in the United States.

This report, if it matches Friday's official unemployment report, would overall imply overall enough job growth to keep up with population, as this is just the private sector job growth.   Government jobs will surely be negative due to sequester, where the effects are still being felt and government has been shedding jobs going on years..  The U.S. needs about 115,000 jobs per month, minimum just to keep up with population growth, with the same lousy, artificially low, labor participation rates.

The monthly BLS jobs survey (CES) has a 100,000 payroll jobs overall margin of error.  ADP changed their methodology and now claim to match the BLS private payrolls, but only historically, after revisions.  The below graph shows shows how many private sector payroll jobs, each month, ADP was off by in comparison to what the BLS reported.   This is a monthly graph, not cumulative.  As we can see, it's been rare where the two monthly reports get the exact same private payrolls growth numbers.   When the below graph bar is negative, that means the BLS reported a larger number of private jobs than ADP did, when the graph bar is positive, it means ADP reported larger private payrolls.  Again, compared are private sector jobs which is different from the BLS headline number.   The graph will was updated with Friday's August BLS jobs report. Below is the cumulative difference between what the ADP reports as the private nonfarm payroll jobs vs. the BLS (ADP minus BLS).  This line shows the divergence, over time in number of nonfarm private payroll jobs reported between the two reports.  Previously the difference between ADP and BLS was around 400,000, now we see the cumulative error more in line with the real BLS CES survey margin of error.  Here again we see a massive change in the ADP private payrolls methodology and benchmarking.  ADP claims their private payrolls cover 24 million jobs with 416 thousand businesses in the U.S.  This represents about 20% of U.S. payrolls.  The graph was updated with Friday's BLS private non-farm payrolls data. Regardless of the statistical differences between ADP and the BLS, these payroll figures are ok, yet nothing to scream and shout about as usual.  Steady as she goes should be analogous to maneuvering a oil tanker with a paddle upstream.