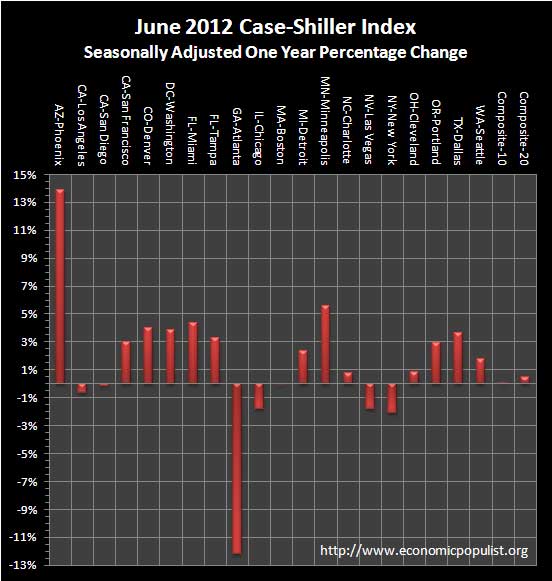 Below is the Q2 2012 percent change against Q2 2011. The seasonally adjusted change was 1.1% from the second quarter a year ago. 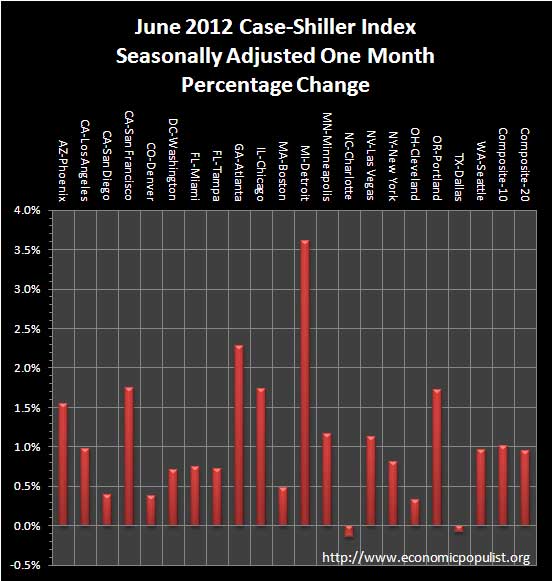 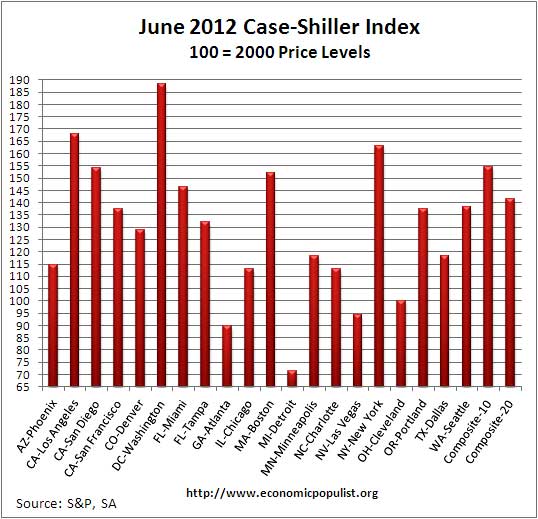 Either way you look at this month's data, most metropolitan area housing prices seem to be stabilizing. From the S&P press release, using the not seasonally adjusted home price indices, S&P is saying the housing market has turned around, quoted below. We don't expect a meteoric rise, come on here, the annual results are really flat Still, the biggest issue , almost never acknowledged, is how home prices are not affordable by today's repressed wages and incomes, as well as the ongoing jobs crisis. One simply cannot afford even a $200,000 mortgage when a household earns $42,000 a year.

Only two cities – Charlotte and Dallas – saw annual rates of change worsen in June. The other 18 cities and both composites saw improvement in this statistic, and 13 of these had a positive trend. There were only six cities – Atlanta, Chicago, Las Vegas, Los Angeles, New York and San Diego – where the annual rates of change were still negative. Boston’s annual rate was flat. We seem to be witnessing exactly what we needed for a sustained recovery; monthly increases coupled with improving annual rates of change. The market may have finally turned around.

the so-called housing recovery is merely a fiction of Fed manipulated interest rates, which will not stay this low forever...

is $3.5k a month gross, after taxes, single, although varies greatly on State to State, assume take home pay is $2800 with income tax, FICA, Medicare (yes folks, you pay for Medicare while working). Your mortgage doesn't include taxes and insurance so tack on another $200, that leaves roughly $1700 for food, retirement, health care, transportation and if not offered through work, health insurance premiums significant. Mortgage payments are supposed to be no more than 25% of your gross, so that's already exceeded it. But the median wage in this country is $26.4k. This is for a single person, who I think could squeeze by here but a family on $42k a year, no way.

We're skipping the overview on S&P Case-Shiller home prices. You can go to their website, here.

We suspect the hurricane will affect home prices in October, so bottom line, there wasn't anything significant to report here and because of the East coast crisis, we've been putting other issues at higher priority.

Also, the housing bust is over so we think S&P should switch back to the seasonally adjusted indices as their headline buzz numbers.

END_OF_DOCUMENT_TOKEN_TO_BE_REPLACED

Senator Bernie Sanders on Income Inequality - 11250 reads
The Elections - 11928 reads
The big bad US Chamber of Commerce - 9084 reads
Oh Those Socialist French - 9778 reads
CountryWide: Rigged Game - 9351 reads
What can an economic recovery build upon? - 37765 reads
Jobs For U.S. Workers Stripped Out of Stimulus Bill Behind Closed Doors - Update It Lives! - 18067 reads
Obama's CIO Vivek Kundra Previous Close Employees Arrested for Fraud, Bribery - 111048 reads
The Ultimate Stock Market Sucker's Rally - 29761 reads
Is Congress Starting to Get It? - 20160 reads
Will the NY Attorney General Bring Doomsday Charges Against Wall Street? If So, How Long Will He Survive? - 1185131 reads
New York Post Claims Census Falsifies Unemployment Figures - 902151 reads
Safeway Skewered for Throwing 6,000 Workers Under the Bus in Video Parody - 399844 reads
How Many Jobs Are Needed to Keep Up with Population Growth? - 291341 reads
VAT or Value Added Tax is Getting a Look in D.C. - 287608 reads
U3 and U6 Unemployment during the Great Depression - 276793 reads
House discusses 401k/IRA confiscation - 261388 reads
Tax Cuts for the Rich Do Not Generate Jobs - 260036 reads
The war on the middle class - 249046 reads
Delusions of Normalcy 2011 - Dismal Scientists Cheer Up - 247385 reads