May's data marked the sixth straight month of growth in exports, and surpassed April's 30.5% growth rate. Imports were up for the seventh straight month, though easing from April's 49.7% rise. 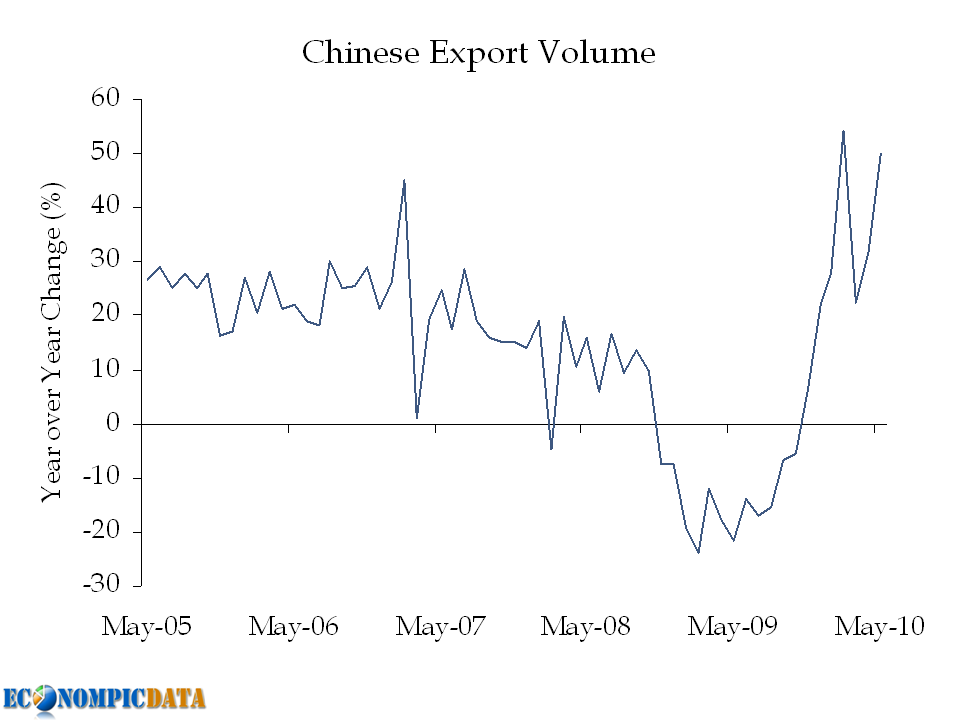 I, to be honest, do not know, whether we're at the point now when we're going to see meaningful progress in the near term. ... Our objective is to encourage China to move as quickly as possible.

With more mealy mouthed vagueness, the strongest words by Geithner acknowledged the reality of the problem.

Reform of China's exchange rate is critically important to the United States and to the global economy.

But gee, in terms of actually doing something, as usual, nothing happens. Chinese currency manipulation has cost the United States 2.4 million jobs from 2001 to 2008.

Meanwhile, Chuck Schumer is rattling his saber in Congress:

Years of meetings and discussions with Chinese officials in an effort to persuade China to float its currency have repeatedly failed to produce lasting and meaningful results," Senator Charles Schumer told the U.S.-China Economic and Security Review Commission, a watchdog group appointed by Congress.

"No question, this is what is called a 'put up or shut up' moment for lawmakers," the New York Democrat said.

Senator Schumer claims the Senate will bring up the 0/congress/bills/111/s3134">currency manipulation bill for a vote in the next two weeks. I'll believe it when I see it.

Is it actually possible to unilaterally manipulate ones own currency or does it take at least two to tango? Could the U.S. unilaterally derail China's currency manipulation?

this means if the U.S. devalues it's own currency, the Chinese currency ratio does not change at all.

They could play some games like that because China holds so many U.S. treasuries, but if China stops buying them.....buying our debt....we've got a whole other can of worms. But in terms of the hard ratio for jobs and goods, all you can do is by a percentage, make sure the Chinese get less "real money" but cannot reduce their costs advantages as long as they maintain that peg.

Their currency ratio is fixed, pegged, it's not floated. They peg it artificially low to gain an export advantage and they have managed to capture a huge chunk of U.S. manufacturing. Operating in the U.S. companies cannot compete due to this and it just ends up costing too much money to manufacturing and even do services in the U.S.

Krugman insists we can uses tariffs. Legally the WTO and good theory allow this due to China's repeated violations. Also, movie and software copyright piracy are between $200 and $250bn annually. Just take the money. It is very simple.

I am tired of the co-dependency thing with China. All U.S. Treasuries held by the BOC are in book form. USTBills are entries on a relational database. They can be flagged as canceled (a soft delete).

Sometimes, you have to show your cards to win.

While normally a tariff would be ruled illegal by the WTO, I think he's right the U.S. is within it's "rights" (a nation is within it's rights in a trade group?) to take action because the currency peg should be an illegal action. It's astounding nothing happens with this, although not due to China as well as multinational corporations out to have an unfair advantage regardless of how that affects a nation or it's workforce.

I was very surprised by Krugman when he came out with this. On the other hand, it's clear he's a "real economist" and frankly, I read some certain posts where it seems they run graph after graph, equation after equation in some sort of deep goal to deny this is a problem. That drives me nuts when I see mathematical spam.