NAR's existing home sales really shot up in June with a 3.2% sales increase to 5.49 million annualized existing home sales.  This is an eight and a half year high.  In February 2007 existing home sales were 5.79 million.  This makes sales 9.6% higher than June of last year.  Existing home sales have been above their year previous amounts for six months now.  Prices are clearly in unaffordable territory as the median home price just surpassed the housing bubble July 2006 peak and hit a new record. 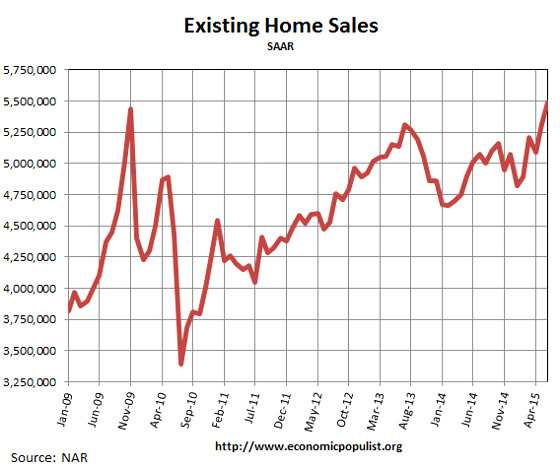 The national median existing home sales price, all types, is $235,400, a 6.5% increase from a year ago.  This is a record and beats the previous $230,400 July 2006 high.  The median price has also increased for 40 months in a row.  Who says the housing bubble cannot return, even when adjusting for inflation.  The average existing sales price for homes in February was 280,300, a 4.6% increase from a year ago. &nbsp:Anyone see a wager increase to support these soaring home prices?  Of course not.  Below is a graph of the median price. 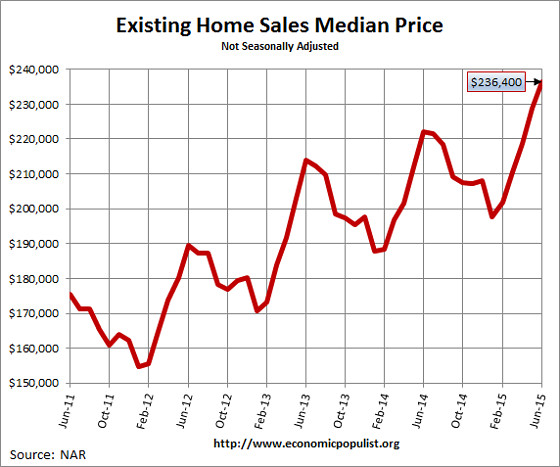 NAR Economist Yun claims it is just the improving economy and the threat of interest rates rising that has caused the increase.  He did not mention soaring rents causing people to take more of a risk on buying a home.

June sales were also likely propelled by the spring's initial phase of rising mortgage rates, which usually prods some prospective buyers to buy now rather than wait until later when borrowing costs could be higher.

The median time for a home to be on the market was 34 days, also a new record since NAR started tracking this in May 2011.  Short sales by themselves took 129 days, foreclosures in 39 days and non-distressed homes took 33 days.  Housing inventory from a year ago has increased 0.4% but is up 0.9% from the previous month.  Current the 2.3 million homes available for sale are a 5.0 months supply.

Below is NAR's breakdown by existing home sales type and regions.  The west has the most unaffordable housing consistently.