The foreclosure fraud bombshell has hit the fan. Updating an earlier post, Bank of America has now halted foreclosures in 23 states:

Bank of America is joining JPMorgan Chase and GMAC is suspending foreclosure processes in 23 states that weren't reviewed properly.

A BoA exec admitted she signed up to 8,000 documents in a month and typically did not read them.

Connecticut has halted all foreclosures:

Connecticut Attorney General Richard Blumenthal on Friday ordered a moratorium on all foreclosures by all banks for 60 days--the most radical action taken by a state on issue of document irregularities.

California also expanded the moratorium on foreclosures it announced last week on Ally Financial foreclosures to include those by J.P. Morgan Chase.

Calling the companies' review of key foreclosure documents "a ruse," California Attorney General Jerry Brown (D) ordered J.P. Morgan to prove it is following the law before it continues foreclosures in the state.

Both J.P. Morgan Chase and Ally have frozen foreclosures in 23 states because some employees had signed off on foreclosure paperwork without properly reviewing the files.

Colorado and Illinois have stopped foreclosures by Ally and at least seven other states have launched probes into the issue. But Connecticut is the first to institute an industry-wide ban.

The robo-signing of affidavits has hit mortage title insurance companies:

Title insurance protects home buyers against losses arising from disputes over the ownership of their property.

In recent weeks, controversy has erupted over employees of mortgage lenders or servicers who sign thousands of affidavits supporting foreclosures that have to be cleared by judges in many states. These employees have become known as robo-signers because they sign so many documents in such a short time.

Below is the original post, written 9 days ago, on the start of the bombshell tidal wave of news, injunctions, halts mentioned above.

Something is amiss in Florida with foreclosures. Something is amiss nationally with foreclosures. When one is foreclosed on, the creditor must file an affidavit with the court. It seems GMAC was manufacturing 10,000 fake affidavits per month. That's right. Signing judgment affidavits, which evict real live people, without checking the statements and data contained within as even being correct. Get's worse. The courts are so overwhelmed, they are processing cases like the delousing chambers at Dachau.

Bloomberg broke the story when GMAC suddenly stopped foreclosures in 23 states. GMAC is the 4th largest mortgage originator. Seems there is a huge problem with foreclosure mills, evicting with improper procedure.

Florida Attorney General William McCollum in August announced an investigation into three law firms that represent loan servicers in foreclosures. McCollum issued subpoenas to the firms, which are alleged to have submitted fraudulent documents to the courts in “numerous occasions” or failed to submit documents at all, according to an Aug. 10 statement from McCollum’s office.

“Thousands of final judgments of foreclosure against Florida homeowners may have been the result of the allegedly improper actions of the law firms under investigation,” the statement said.

Congressman Alan Grayson even wrote a letter to the Florida Supreme court asking all foreclosures be stopped by court order:

I am disturbed by the increasing reports of predatory ‘foreclosure mills’ in Florida. The New York Times and Mother Jones have both recently reported on the rampant and widespread practices of document fraud and forgery involved in mortgage assignments. My staff has spoken with multiple foreclosure specialists and attorneys in Florida who confirm these reports.

Three foreclosure mills - the Law Offices of Marshall C. Watson, Shapiro & Fishman, and the Law Offices of David J. Stern - constitute roughly 80% of all foreclosure proceedings in the state of Florida. All are under investigation by Attorney General Bill McCollum. If the reports I am hearing are true, the illegal foreclosures taking place represent the largest seizure of private property ever attempted by banks and government entities. This is lawlessness.

I respectfully request that you abate all foreclosures involving these firms until the Attorney General of the state of Florida has finished his investigations of those firms for document fraud.

I have included a court order, in which Chase, WAMU, and Shapiro and Fishman are excoriated by a judge for document fraud on the court. In this case, Chase attempted to foreclose on a home, when the mortgage note was actually owned by Fannie Mae.

Taking someone's home should not be done lightly. And it should certainly be done in accordance with the law.

Thank you for your consideration of this request.

Of course GMAC denies, they are running a foreclosure factory, claiming it's just a technical issue. That said, the New York Times reported that the courts are overwhelmed homeowners are only getting a 5 minute hearing. That's not cool. Supposedly in the United States, everyone is entitled to a fair and full hearing.

The Florida Supreme Court has consistently recognized the need to hire retired judges on a temporary basis, Mr. Combs said, and has ruled that such a “temporary” use is constitutional.

But because the retired judges are being given foreclosure assignments “repeatedly and consecutively” to the point of usurping the elected judges’ jurisdiction over all residential foreclosure cases, he said, their use may not qualify as temporary and could thus violate the Florida constitution.

The fact that these judges are being paid to reduce the court’s case load creates a perception among homeowners that the judges have a financial interest in dispensing cases prematurely, Mr. Combs said, creating a potential bias against borrowers and possibly violating their right to due process.

He pointed to a recent case in Broward County in which a retired judge refused to postpone a borrower’s foreclosure sale even though the bank had agreed to it. The judge stated that she was there to “dispose of cases.”

J. Thomas McGrady, chief judge in the Sixth Judicial Circuit, said in a press release announcing the program: “We have to clear these cases because of the negative impact they are having on other civil litigation. The real estate crisis has placed a tremendous burden on our judges, and people with other types of pending litigation are also entitled to their day in court.”

Yves Smith on Naked Capitalism asks, How Serious is the GMAC Problem? Pretty Serious and Not Just GMAC, is the problem limited to GMAC Mortgage?

GMAC Mortgage and other banks may hope to sell the story line that its problem is limited to a lone “rogue servicing officer.” Unfortunately, the servicing officer in question indicated in his testimony that he prepared 10,000 or more affidavits per month, so it strains credulity to think that GMAC management was ignorant of his actions.

Lovely, while the Banksters get trillions, millions of people are being treated like financial cattle, even through our court system.

We will assuredly be hearing more on this one. From the Bloomberg article a quote:

“All the banks are the same, GMAC is the only one who’s gotten caught,” said Patricia Parker, an attorney at Jacksonville, Florida-based law firm, Parker & DuFresne. “This could be huge.” 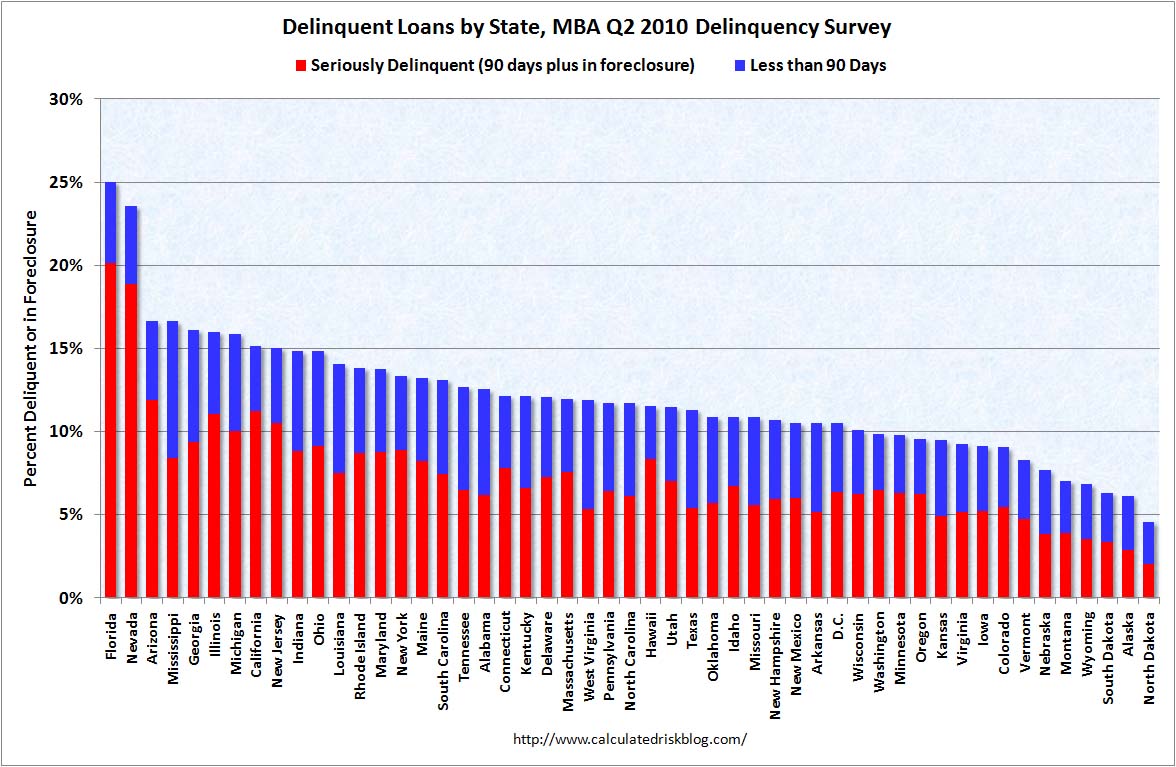 Rep. Grayson also wrote a letter to Fannie Mae on this subject: on stopping fraudulent foreclosures. It’s not clear if Fannie/Freddie are going to stop using foreclosure mills, as the letter asked. The mills are still in Fannie Mae's Retained Attorney Network.

Alan Grayson is hot on this story and below is an incredible video clip describing how bad foreclosure mills are. Note you get to talk to someone in India about your foreclosure.

I have enjoyed the recent articles by Yves Smith on Naked Capitalism. The mountain of mortgages created by Wall Street and inadequately documented have contributed to the problem. Courts are tossing out mortgages that have no obvious owner or investor. Millions of foreclosures are being processed in fraudulent and abusive ways. When it was possible to obtain title insurance that protected the buyer based on a "chain of title" showing previous owners and mortgage holders, buying a foreclosure and using securitized loans were not a problem. Wall Street said they could not be "creative" if they were required to follow state laws. Mortgages and real estate are regulated by state laws that differ widely from state to state. The tranched mortgages that were not adequately documented flooded our markets with product that is faulty. Meanwhile the profits from the process have been taken as commissions placed in private accounts probably off-shore. Essentially the bubble produced millions of fraudulent IOU's and the money from the process is gone.

She's one of the best on pointing out corruption and agendas going on in finance. I try to list sites with a lot of fast moving content over on the right, who say something unique and are not the MSM.

This is a pretty incredible story. BoA foreclosed on a guy who doesn't even have a mortgage.

Florida must be a war zone.

I love it when Bloomberg does real investigative journalism, their overview of economic reports is so happy talk, this is refreshing.

They discovered GMAC busted for bad affidavits since 2006.

In America, anyone who plays by the rules is just perceived to be a sucker.

Foreclosure via fraud is the reason for illegitimate homelessness and underhanded evictions, unjustified IRS tax bills due to false 1099-A's, and unfair “Deficiency Judgments.” Ironically, some people who express their anger at “deadbeats” appear to be more acceptable about the manifest fraud and criminal activity being carried out by people with credentials to practice law. Equally ironic is the reality that some people pretending to be annoyed about "deadbeats”are the actual people who are participating in real estate racketeering –fully sanctioned by the majority of courts, especially Bankruptcy Courts!
http://www.lawgrace.org/2010/09/30/important-facts-about-foreclosure-and...

Go to the link below:

Wow, this is big. I feel bad for those that have already lost their homes though. I cannot believe that these documents are being signed and she didn't even read them. There are so many crooks out there, you have to read everything before you sign it.

the culture of homes as gambling chips continues, only now it's the foreclosure/short sale/repossession game. Of course real people living in real houses who are real families out on the street doesn't count again.

This story is huge, every day new details, facts are coming out about foreclosure mills. It's nationwide, our lovely Banksters at the top of the heap (what a surprise).

“Mortgage lenders are not required to know laws - attorneys are! The attorneys made severe errors - sometimes intentionally, since errors help keep the billable tab going, and commit the very frauds that provide basis, defenses, and reasons to attempt negotiating mortgage . . http://newsblaze.com/story/20101028181052lawg.nb/topstory.html/