The rich get richer and the rest of us get the economic shaft.  That is the theme of this so called economic recovery since 2009.  A new Pew Research report, A Rise in Wealth for the Wealthy; Declines for the Lower 93%, analyzes newly released Census data on wealth.  What they found is the rich got richer and the rest of us got poorer.  The great American wealth transfer continues. 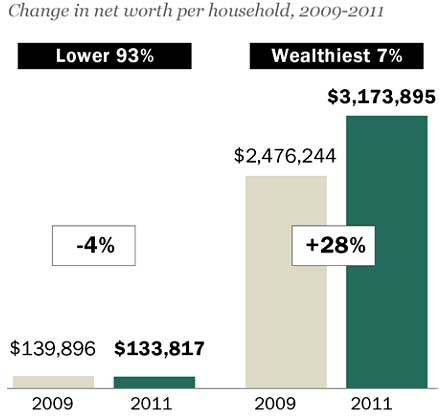 How did the rich get richer and the poor get poorer?  Most households in the United States are dependent upon wages and salaries as their source of income.  Their largest investment is usually a home.  The super rich, on the other hand, are heavily invested into stocks, bonds, and other financial instruments.  As a percentage of their wealth, the home is only a fraction.

Even though the housing bubble and resulting collapse is over, millions lost equity in their home as well as their jobs.  Many had their retirement in 401ks wiped out.  The super rich on the other hand rode the Wall Street recovery to even more riches.  The upper 7% by wealth now have 24 times more money than the bottom 93%.  In 2009 that ratio was 18 times more for the super rich than the vast majority of Americans.  This in a sad day for America.  Economic equality is simply disappearing from the landscape. 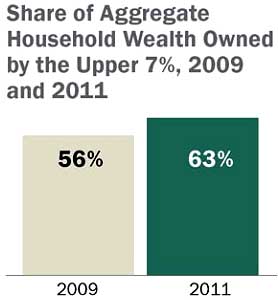 Household wealth are assets minus debt.  Student loans have soared and home prices in 2011 declined.  Below is a graph of the Case-Shiller home price index.  Home prices declined 4% in 2011 while the S&P 500 soared.

From the end of the recession in 2009 through 2011 (the last year for which Census Bureau wealth data are available), the 8 million households in the U.S. with a net worth above $836,033 saw their aggregate wealth rise by an estimated $5.6 trillion, while the 111 million. 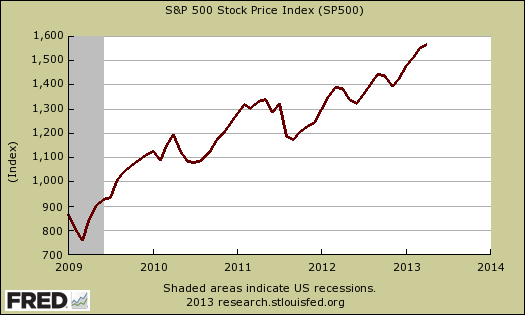 There are more Census data breakdowns on the great wealth transfer from poor to rich on the Pew report website.  What is most telling from Pew's data analysis is how the Census overviews fail to breakdown wealth by households and levels.  If one reads the Census overviews, it appears all is well, since the median wealth has recovered from the recession, as Pew amplifies:

Yet with the same figures, the Census reports makes it seem like all have suffered since 2007.  Take this paragraph for example, which makes America's wealth decline seem like a shared experience, which clearly it is not.

Transfer to the super rich is not economic recovery.  Yet by amplifying the median household net worth, one wouldn't even realize what has happened without Pew Research Center digging into the actual figures.  Thank you Pew for the number crunch, showing what most of America already knows.  We have gone from a society which values economic equality to a land of the proletariat and feudal lords.