The House Committee on Oversight and Government Reform is holding multiple hearings on the financial crisis.  Today's hearing, the 3rd of 5, was Credit Rating Agencies and the Financial Crisis.

A Credit Rating Agency is:

is a company that assigns credit ratings for issuers of certain types of debt obligations as well as the debt instruments themselves. In some cases, the servicers of the underlying debt are also given ratings. In most cases, the issuers of securities are companies, special purpose entities, state and local governments, non-profit organizations, or national governments issuing debt-like securities (i.e., bonds) that can be traded on a secondary market.

Jerome Fons testified that the credit agencies were in a race to the bottom on actual quality standards in issuing ratings.

Rep. Waxman points out that Moody's had the highest profits of any S&P 500 company during this time period, all the while subprime, derivatives were bubbling in a cataclysmic morass. 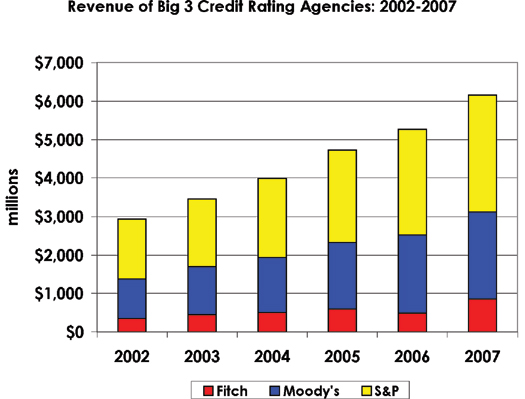 A previous post shows that AIG had a AAA credit rating a day before their emergency rescue by the Fed and CNBC interviewed a Standards & Poors representative who never answers the question on how that could be.

Emails, listed as evidence in the hearing documents, are summed up as Selling Employees Soul for Pay, implying the employees themselves were forced to write economic fiction in order to keep their jobs. They also complained that it made them appear incompetent.

Mabel Yu, Vanguard, expressed "frustration" with the ratings agencies' willingness to allow "issuers to get away with murder"

and a Standards and Poors Employee wrote:

Is because these agencies are *still* in a monopoly position as regards ratings.