Congress is focused on all the wrong things to get people back to work.  We hear day after day the drone of budget deficits, yet not a word is mentioned on the trade deficit.   This is the problem Congress should be obsessed with.   Our massive trade deficit is stunting economic growth and costing America millions of jobs.

EPI has a new study which shows once again, reducing the trade deficit will create American jobs.  The number one cause of our massive trade deficit is currency manipulation.  The figures are astounding.   EPI estimates 20 countries, developed and underdeveloped, made off with $700 billion more in trade by manipulating their currency in 2011. This cost the United States $400 billion in additional trade deficit for the same year.  That's a hefty amount of cash. Below is EPI's graph on what the trade deficit would have looked like under two methods for stopping currency manipulation.    The high impact estimates about a 3% increase in exports and corresponding decrease in imports.  Low impact assumes half that.    The dramatic projections illustrate what a drain on the U.S. economy currency manipulation is. 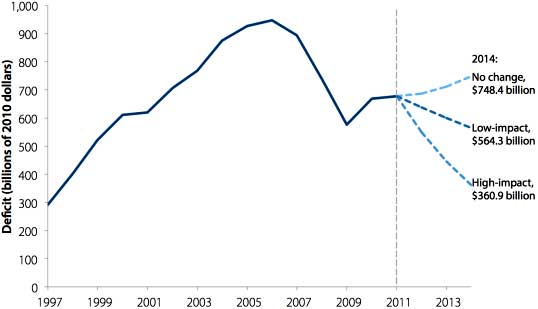 The EPI study goes onto to suggest policies which ,completely reverse the U.S. trade deficit and return GDP and employment levels back to the early 1990's. Throughout the paper they use Ohio, one of the states hit hardest by trade, as an example to show the positive effects on that state's economy.

Will policy makers listen to the statistics and actually do something?  We doubt it, but we suggest writing them anyway.  Demand Congress start addressing the biggest cause of American job suck, currency manipulation.  One will need to bang the drum loudly, for Congress is clearly obsessed with the wrong deficit.

Do corporations with foreign holdings benefit from a strong dollar? Is the strong dollar better for Google with tons of cash over seas?

And why does the media always go to Jim Bob's diner to interview him about how hes going to cut the throats of a couple employees if they raise the minimum. Why not do stories on McDonalds, Burger King, IHOP and the rest of the service industry? An industry that employs millions of American workers. Many of those workers make the minimum or close to it.

Minimum wage has two arguments, one is labor is more expensive so businesses hire less, but another is the increased disposable income boosts overall the economy in increased consumer spending, thus allowing businesses to hire more.

Bottom line is morality. We have millions of people, something like 26% working more than 40 hours a week and not being able to make rent. That's just wrong.

Should I write up a SOTU/agenda post so we can chat about all of it? There were a few good ideas overshadowed by disaster. The great tech shortage lie and agenda will absolutely decimate college degreed professional labor if these corrupt politicians get their way.

Its very sad when someone of modest means borrows thousands and thousands of dollars to get a technical degree and then are spit on by their own elected officials. Its out of control.

I've written about this before - the minimum wage is ignored by both the private and public sectors in the guise of "internships." The Department of Justice hires Special Assistant US Attorneys that must work for FREE, have law degrees, be admitted to state bars, and promise they will work for FREE for an entire year. Same goes for State Attorneys General. This is absolutely true, visit the USDOJ job site, they post ads all the time. Same with State Attorneys General. Same goes for jobs in the media, retail, health, architecture, law, corporations of all sorts. Do a search in indeed.com or craigslist in any market any day of the week. This country's labor force is being boned hard and it's been going on in plain sight and with scams for years now that aren't even derided as scams anymore because they are the new normal.

So if that's the government demanding free labor and forcing a drop in wages through its own actions, does it really care about raising the wages of the work force? Yeah, sure, just as flooding the labor market with more workers is sure to benefit workers with American citizenship. Meanwhile, in the rarefied world of bull and crap that is meant to distract everyone that doesn't have a clue, Petty Midget Tyrant Mikey "I love money laundering banksters because I'm one of them" Bloomberg declared war on styrofoam - because that will be sure to improve the lives of the 99%. Ringmaster, continue on with the show and distractions. Minimum wage? Irrelevant. PhDs working for free - that's the USA in 2013 and the bankster government approves and participates itself.

The abuse going on and here you have attorneys with 6 figure law school debt to boot is outrageous. Yeah, they also use 1009-misc "contractors" to get around minimum wage laws and paying people.

Seriously, what society tolerates this? There was one show where some 60 year old woman was in a cake shop baking and she was an "intern." And the owner/boss had no problem calling her that. I wonder, 40 years after college, what was the internship giving her? Would she get credits in Heaven when she keeled over? It's everywhere. Same with "fellowships" that pay sub-market wages because, you know, it's a fellowship. All ploys meant to bone the US worker.
These proliferated over the years (especially in the post-NAFTA era). And a study will show NGOs, philanthropies, anyone that might have protested or given a crap all suck at the teats of big $ banks, law firms, and corporations and participate in the same nonsense, so don't look to this "Justice Center" or that "Foundation" to care about the struggling American citizen. An examination of any of their boards shows big CEOs or other $ players that love exploitation. Along with the US Government, they all collect big $ from corrupt corporations and individuals and all exploit the same cost-saving scams, so they all love the status quo. In sum, we can't look to them for help, we must help ourselves.

Or even point me to them and I will write it up, or you could write an Instapopulist. Unpaid labor is really outrageous and it does happen every day, so obtaining deep statistics would help expose the pattern. I can look as well.

First, just to show this is happening as of today and the DOJ is doing it, here's a link to a DOJ UNCOMPENSATED attorney position in California, requiring a law degree, admission to a state bar, and one year of experience:
http://www.justice.gov/careers/legal/jobs/13-sdca-sausa-cv-01.htm

And to show how prevalent it is just within the DOJ, look at this link (find "uncompensated" or "special" to jump to the relevant jobs):
http://www.justice.gov/careers/legal/attvacancies.html

There are unpaid attorney positions in districts in Illinois, Missouri, Virginia, the DOJ HQ in DC, and elsewhere. The DOJ has posted jobs like these across the country for at least a couple of years now so don't expect any enforcement because that would be slightly hypocritical of the government. I sure hope the landlords for those unpaid folks don't want actual money, the unpaid employees can buy groceries with a smile, and their cars and heat run on pixie dust. Or perhaps the people able to take these jobs and not become homeless are well-connected politically/wealthy and just want a new title on their resume before working for a big firm?

One book on the subject is Intern Nation, plus there are "interns" (i.e., college grads working for free) that have their own sites.
Another link: http://unfairinternships.wordpress.com

Finally, just to show you how Fox News and Koch-funded Reason claim not paying labor is all good, here's a typical response: http://reason.com/archives/2010/05/06/unpaid-interns-are-exploited.

The Kochs fund Reason and one of boys sits or sat on the board of Trustees.http://www.sourcewatch.org/index.php?title=Reason_Foundation

See, unpaid labor is good for Americans and is "libertarian" and "patriotic." Apparently according to the people in this same camp, so is breaking sanctions against Iran. dumping toxic waste, etc. as Bloomberg revealed in its article on them. Now, if only Stossel or the Kochs or Bill O' would just stop working, for free or not.

Will the NY Attorney General Bring Doomsday Charges Against Wall Street? If So, How Long Will He Survive? - 1162941 reads
Even the Pope Says Globalization has run amok and steam rolled workers - 18409 reads
Economic Disaster - Are You Next? - 9564 reads
FDIC Quarterly Report - Highest Number of Problem Banks Since 1993 - 19356 reads
Friday Movie Night - The Meltdown of the House of Cards Edition - 83767 reads
Outsourcing Has Its Benefits - Money Landering, Stock Market Crashes and Failed Projects - 31462 reads
Japan Causes Public Doubts on Nuclear Power - Future of Industry in Question - 22179 reads
A Wall Street Transaction Tax - 60684 reads
Wow! 243,000 New Jobs Created in January - 31463 reads
A Look at September's Payrolls from the Employment Report - 20721 reads