Graphed below are imports and exports graphed and by volume, note the global trade collapse in 2009 due to the recession.  Imports are in maroon and exports are shown in blue, both scaled to the left.  We can also see what bad trade treaties has wrought by the below graph. 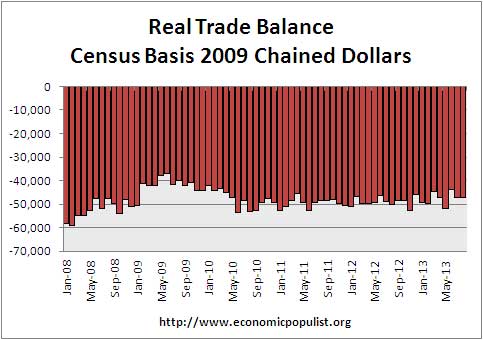 Oil or petroleum related end use was 33% of the goods trade deficit by SITC classification.  End use means the final use of the product and includes oil byproducts.  For example, plastics are made up of petroleum, yet by their end use category, would be marked often as consumer goods.    The Wall Street Journal also noticed the decline, yet we don't believe their calculation of petroleum being 47.9% of the trade deficit is quite right.  Petroleum is reported via the STIC accounting method and trade services are added to the balance of payment method to obtain the total monthly seasonally adjusted trade deficit.  Yet the point is valid, petroleum as part of the overall trade deficit is still quite high.

If we take the real valued end use of petroleum versus non-petroleum of the goods trade deficit, it is quite true that petroleum as a percentage of the trade deficit is decreasing.  Real means the balance figures are adjusted prices using chained 2009 dollars so inflation is not in the mix.  Below is a graph of petroleum end use deficit as a percentage of the goods trade balance and this breakdown is by the Census accounting method and in 2009 chained dollars.  What we see is domestic production in energy has truly helped with the trade deficit, yet China imports more than take up the slack in continuing to send the U.S. economy abroad. 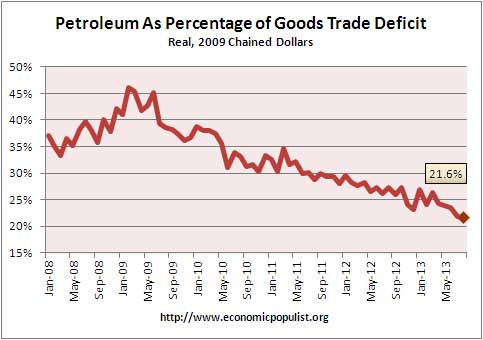