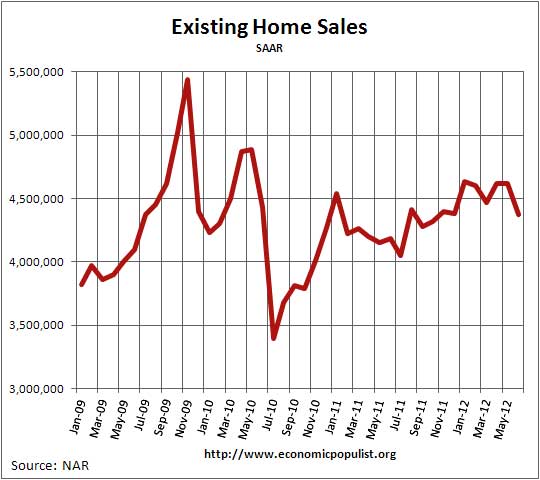 The NAR claims the reason for June's decline is constrained supply.

Total existing-home sales, which are completed transactions that include single-family homes, townhomes, condominiums and co-ops, declined 5.4 percent to a seasonally adjusted annual rate of 4.37 million in June from an upwardly revised 4.62 million in May, but are 4.5 percent higher than the 4.18 million-unit level in June 2011.

Total housing inventory at the end June fell another 3.2 percent to 2.39 million existing homes available for sale, which represents a 6.6-month supply at the current sales pace, up from a 6.4-month supply in May. Listed inventory is 24.4 percent below a year ago when there was a 9.1-month supply.

Here we can see it is possible there were less foreclosures for sale, or is it simply a lack of buyers? NAR claims buyer traffic is up two fold from last fall, yet hello, their sales decreased ....again.

Yet here is the money shot and why we find NAR press releases almost laughable.

"The distressed portion of the market will further diminish because the number of seriously delinquent mortgages has been falling," said Yun.

Notice in the below paragraph the high percentages of all cash buyers and investor buyers.

The median sales price for existing homes is now $189,400 and up 7.9% from a year ago. The median price can also be pushed up by less low end foreclose sales. Again NAR is ridiculous. They claim this is the highest increase since February 2006 when the median price rose 8.7% from a year prior. NAR fails to quote the average price, which was $238,800 and up 5.8% from a year ago, or that prices overall fell further in 2011 and earlier this year.

Listed inventory is 24.4 percent below a year ago when there was a 9.1-month supply.

Yet even with REOs being held off of the market, expecting tight inventories to continue is questionable. The massive foreclosure fraud and robo signing scandal only temporarily halted the foreclosure process. Recall the unjust national settlement for robo-signing and foreclosure fraud enabled the great foreclosure machine to start up again. May saw a 9% increase in bank foreclosure filings.

Finally, June was hot, blazing hot. Normally that should accelerate the buying season, although it was so damn hot one has to wonder why anyone with AC would venture outside.

END_OF_DOCUMENT_TOKEN_TO_BE_REPLACED

GDP Shrunk at 0.9% Rate in 2nd Quarter on Weaker Consumer Goods, Construction, & Inventories - 1250 reads
Global oil production exceeded demand by 1,490,000 barrels per day in June - 918 reads
US oil exports at a record high, oil supplies at a 18 year low, SPR at a 37 year low - 577 reads
Power Corrupts, Nuclear Power Corrupts Absolutely - 45114 reads
The Boys Club of Tech Perpetuated by Foreign Worker Visas - 59853 reads
The Sovereign State of BP - Down for the Count? - 39624 reads
Low Prices at High Costs: On Wal-Mart's Destruction of the American Economy - 27989 reads
Gaddafi Regime Collapses - People Hold Line Despite Brutal Attacks - 69763 reads
The Great Worker Shortage Lie is Alive and Well - 106543 reads
Obama's CIO Vivek Kundra Previous Close Employees Arrested for Fraud, Bribery - 112699 reads
Obamacare Outsourced - 83284 reads
The Bipartisan Citizen Beat Down and the End of Democracy - 77300 reads
Wisconsin Does the Nasty Against Labor - 130955 reads
Will the NY Attorney General Bring Doomsday Charges Against Wall Street? If So, How Long Will He Survive? - 1186691 reads
New York Post Claims Census Falsifies Unemployment Figures - 906510 reads
Safeway Skewered for Throwing 6,000 Workers Under the Bus in Video Parody - 402580 reads
How Many Jobs Are Needed to Keep Up with Population Growth? - 297763 reads
VAT or Value Added Tax is Getting a Look in D.C. - 294652 reads
U3 and U6 Unemployment during the Great Depression - 280703 reads
House discusses 401k/IRA confiscation - 266661 reads
Tax Cuts for the Rich Do Not Generate Jobs - 261880 reads
The war on the middle class - 255141 reads
Delusions of Normalcy 2011 - Dismal Scientists Cheer Up - 249200 reads