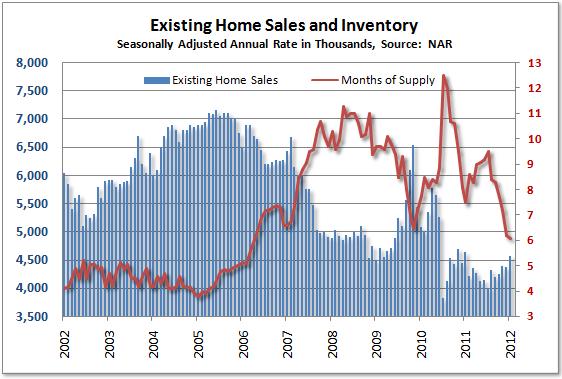 Unsold inventory dropped from 6.4 months of supply to 6.1 months. This was a -0.4% change to a level of 2.31 million existing single family homes for sale on the market.

Total unsold listed inventory has trended down from a record 4.04 million in July 2007, and is 20.6 percent below a year ago.

The thing is, we know there are a backlog of foreclosures due to robo-signing and fraud stopping the process. While inventories maybe back to pre-recession levels, this level maybe temporary.

Additionally we have seen seasonal adjustments be a little skewed in housing data due to unusually warm weather in January.

The NAR makes a political statement, right in the middle of their report:

A government proposal to turn bank-owned properties into rentals on a large scale does not appear to be needed at this time.

Look at the distressed home sales rate for January. Does that look healthy to you?

All cash sales are 31% of total sales. So called investors snapped up 23% of the homes, up from 21% in December and at a rate the same as a year ago. In other words, 23% of these sales are not going to regular families, individuals but to bulk residential real estate speculators, home flippers and other commercial enterprise related activities.

First-time buyers rose to 33 percent of transactions in January from 31 percent in December; they were 29 percent in January 2011.

Contract failures are still at 33%. This is when the deal falls through.

Contract cancellations are unchanged from December but were only 9 percent in January 2011; they are caused largely by declined mortgage applications and failures in loan underwriting from appraisals coming in below the negotiated price.

We take NAR statistics with a grain of salt due to the gun ho commentary contained within their statistical releases. Another site which pours over the housing statistics nitty gritty is Calculated Risk.

Calculated Risk goes through some of the insights and his own on housing inventory here.

We caught the main one, foreclosures were postponed, in the above post. Housing inventory matters in terms of markets and 6 months is far away from 8 months in terms of price implications, recovery and such.

Not that we don't think housing prices need to still drop until they finally come into alignment with wages in the U.S. for the majority.