The Dow hit a record high yet for most of America this means little.   While some fawn and fan over the high rise stock market, here are some stories that actually matter to real people with real lives.

Work in America has become so exploitive, many are working for free.  The New York Times interviewed a few 20 somethings on what it's like to give your all for nothing in return.

“If I’m not at the office, I’m always on my BlackBerry,” said Casey McIntyre, 28, a book publicist in New York. “I never feel like I’m totally checked out of work.”

Ms. McIntyre is just one 20-something — a population historically exploitable as cheap labor — learning that long hours and low pay go hand in hand in the creative class. The recession has been no friend to entry-level positions, where hundreds of applicants vie for unpaid internships at which they are expected to be on call with iPhone in hand, tweeting for and representing their company at all hours.

The New York Times amplified how corporate profits won't be affected by the Sequester one little bit.  Meanwhile America's workforce continues to suffer.

With $85 billion in automatic cuts taking effect between now and Sept. 30 as part of the so-called federal budget sequestration, some experts warn that economic growth will be reduced by at least half a percentage point. But although experts estimate that sequestration could cost the country about 700,000 jobs, Wall Street does not expect the cuts to substantially reduce corporate profits — or seriously threaten the recent rally in the stock markets.

“It’s minimal,” said Savita Subramanian, head of United States equity and quantitative strategy at Bank of America Merrill Lynch. Over all, the sequester could reduce earnings at the biggest companies by just over 1 percent, she said, adding, “the market wants more austerity.”

As a percentage of national income, corporate profits stood at 14.2 percent in the third quarter of 2012, the largest share at any time since 1950, while the portion of income that went to employees was 61.7 percent, near its lowest point since 1966. In recent years, the shift has accelerated during the slow recovery that followed the financial crisis and ensuing recession of 2008 and 2009, said Dean Maki, chief United States economist at Barclays.

The Atlantic, perhaps taking a playbook on some of our own analysis did a great job examining the statistics on PhD level Science, Engineering, Mathematics and Technology graduates and how they are not finding jobs: 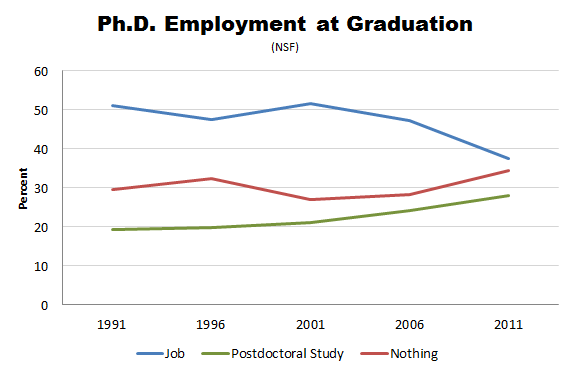 Politicians and businessmen are fond of talking about America's scientist shortage -- the dearth of engineering and lab talent that will inevitably leave us sputtering in the global economy.

But perhaps it's time they start talking about our scientist surplus instead.

I am by no means the first person to make this point. But I was compelled to try and illustrate it after reading a report from Inside Higher Ed on this weekend's gloomy gathering of the American Association for the Advancement of Science. In short, job prospects for young science Ph.D.'s haven't been looking so hot these last few years, not only in the life sciences, which have been weak for some time, but also in fields like engineering.

This is the must read article of the day with plenty of original graphs to make clear the point. There is no American worker shortage, at any skill level or specialty..

So How Much in the Tank is the New York Fed with the Banks?

Quite a bit.   Seems the New York Fed made to release Bank of America from any fraudulent claims on mortgage securities the Fed purchased.  Gretchen Morgenson discovered another gem. The New York Fed agreed to testify for BoA against AIG.

The agreement spells out the terms of a deal in which the New York Fed received $43 million from Bank of America’s Countrywide unit. The money changed hands to settle a narrow dispute involving cash flows on several mortgage securities held by an investment vehicle, known as Maiden Lane II. That vehicle was created by the New York Fed as part of the rescue of A.I.G., which had held the Countrywide securities. The previously confidential agreement released Bank of America from all litigation claims on the securities held by Maiden Lane II.

But in exchange for that $43 million, the New York Fed did something else for Bank of America. It agreed to testify on behalf of the bank in its legal battle against A.I.G. over fraud claims.

Why is the New Jersey Pension Fund $47.2 billion in the hole?

New Jersey’s public pension deficit swelled 13 percent to $47.2 billion in fiscal 2012 as the state continued to make partial contributions to its retirement plans.

The system had about 64.5 percent of assets needed to cover promises to current and future retirees as of July 1, 2012, compared with 67.5 percent a year earlier, when the gap stood at $41.7 billion, according to data posted on the state Treasury Department’s website.

A Quarter of Americans Have More Credit Card Debt Than Savings

Chalk up another terrible statistic.  One in four Americans has more credit card debt than savings:

Remember when cartels meant drug dealers and oil states?  Now we have a widening probe where Banks and brokers acted as a cartel to manipulate key interest rates:

The European Union’s (EU’s) antitrust regulator has widened its investigation of suspected unfair fixing of lending benchmarks such as Euribor and Libor to interest rate products for the Swiss franc.

Following a recent fine for RBS by US authorities, Joaquin Almunia said the European Commission’s inquiries were focused on a number of cases of suspected price manipulation.

"We suspect the existence of cartels between certain actors in the market for derivative products — banks, but also brokers," he said.

"These possible anticompetitive agreements consisting of manipulating rates could have allowed participants to make unfair additional profits on their market transactions."

It seems employers are really wanting to dump your wife.  From their benefits roster that is:

Companies have a new solution to rising health-insurance costs: Break up their employees’ marriages.

By denying coverage to spouses, employers not only save the annual premiums, but also the new fees that went into effect as part of the Affordable Care Act. This year, companies have to pay $1 or $2 “per life” covered on their plans, a sum that jumps to $65 in 2014. And health law guidelines proposed recently mandate coverage of employees’ dependent children (up to age 26), but husbands and wives are optional.

Remember How the Fed is Buying Up Mortgage Backed Securities?

Guess what.   Two economists are saying the Federal Reserve could see a gigantic black hole in loses and the FOMC wouldn't even listen to them.

The Fed’s hold on policy may weaken should possible losses on its balance sheet coincide with high U.S. budget deficits and an inability of Congress and the White House to put fiscal policy on a sustainable path, according to the economists’ paper presented at the U.S. Monetary Policy Forum in New York. The audience included at least eight policy makers on the Federal Open Market Committee.

“The combination of a massively expanded central bank balance sheet and an unsustainable public debt trajectory is a mix that has the potential to substantially reduce the flexibility of monetary policy,” the economists said. “This mix could induce a bias toward slower exit or easier policy, and be seen as the first step toward fiscal dominance. It could thereby be the cause of longer-term inflation expectations and raise the risk of inflation overall.”

I find this piece odious.  The claim is if the minimum wage is increased people will go into further debt.  It's ridiculous, of course they will since debt is usually a ratio.  Naked Capitalism covered the article:

Now I am sure moralists somewhere will look at this result and tisk tisk over the irresponsibility of poor people. But this information raises more complicated questions that merit further study. I didn’t look at a lot of metropolitan areas, but the ones with decent public transportation that I looked at all had living wages above the $9 level. Most places in America require having a car. Depending on relatives or friends for transportation is a risky proposition, particularly for low wage workers, where one absence often leads to being fired. So getting a car, or trading in an old one (that might be at risk of needing costly repairs) may not be as dodgy as it looks from 50,000 feet. Similarly, the spending increase tapers off over time, suggesting some element of pent up spending is at work (home repairs? desperately needed dental work?). This pattern seems to illustrate the treadmill the poor are on, that until you are earning a living wage, even getting more money merely means trading one form of desperation for another.

Congress is going postal over the post office and doing their best to gut it.  Once again the privatization agenda is behind the scenes.

If capitalism is about delivering the best goods and services at the cheapest prices -- and not about plutocrats wringing profits from the rest of us -- then why is the USPS being forced to slowly kill itself?

The privatization of public assets is something we've seen over and over and it rarely, if ever, works for the public. The example of Chicago parking meters is just repeated time and again. With a strong profit motive, private companies are highly incentivized to cut service to the bone and raise revenues as fast as possible. That's not in the interest of good public service, where the origins of the post office are.

Testosterone Pit reminds us the Dow high has more to do with quantitative easing than anything else.  The real economy still sucks.

The Fed’s relentless money-printing and asset-purchasing operations as primary impetus behind the new high. There is no longer any pretense that this has anything to do with fundamentals or the economy or with corporate health. Even the New York Times admits that the driver behind this new high is the confidence that the Fed will continue to pump $85 billion a month into the markets, ad infinitum, and if anything “very lumpy” shows up, it will print even more.

The Dow is Not the Economy

Why we have to state the obvious seems more to do with the press.  At least The Guardian set the record straight:

There is only one thing you need to know about finance: the stock market is not the economy.

This is worth remembering, because the stock market has been turning in some seductive performances, while the economy has been languishing. The Dow Jones Industrial Average hit a new high of 14,222 today; if it remains that lofty throughout the day, it will beat the previous high of 14,164 on 9 October 2007.

Inevitably, seeing numbers like the Dow rise should feel good. Our gross domestic product isn't going up, having barely scraped out 0.1% last quarter. Our personal income isn't going up, as wages are stagnating. Our employment numbers aren't going up, as we're still short three million jobs lost in the recession. Our 401Ks are dispersed through the stock market and it's nice to feel a little rich, or at least better off. When many of the major economic indicators provide only a wheezing malaise, the Dow high provides a little spot of irrational exuberance that is a welcome antidote.

But don't trust the Dow. It doesn't have your best interests at heart. It lies to you. It's that narcissist who's always preening and trying to look powerful when in fact it barely deserves an invitation to the party.