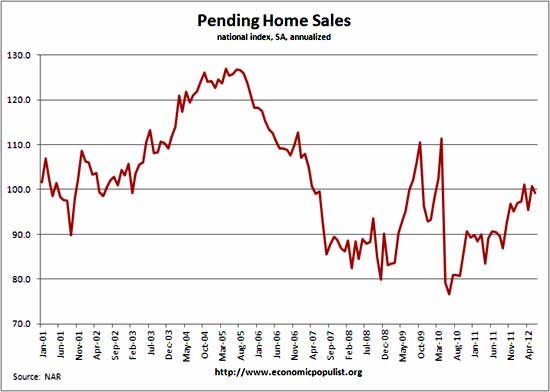 The above graph shows pending home sales are really around 2002 levels, ignoring the housing bubble itself and the tax credits of 2009. Last month the NAR claimed home sales would increase 10%. We thought that was a pipe dream and this month's statistics seem to reflect the smoke NAR is continually blowing on residential real estate's magic recovery.

Once again the NAR is smokin' crack. Literally they claim housing starts will increase 50% by 2014.

Housing starts will likely need to double over the next two years to satisfy the pent-up demand for both rentals and ownership.

I guess if one keeps saying something long enough, eventually it will hit, but we see nothing to indicate a 50% increase in housing starts.

NAR also reports high demand for mortgages causing delays. O'Rly. Freddie Mac's June mortgage volume was -2.5% down in June, annualized with about 70% of that volume being refinancing. Single family delinquencies were 3.45% whereas apartment delinquencies upticked to 0.27%.

We do know foreclosures, REOs are being held off of the market. Estimates range from 80-90% of all REOs (bank owned properties) are actually shadow inventory, not being put on the market for sale, and is a major reason housing inventories are so low.

Mortgage rates hit record lows, 3.49%, but lending standards are absurd, with unscrupulous debt collectors being allow to ruin FICO scores over very small and unverified debts, mostly medical bills. Here is one area the NAR might be onto something, the claim lending standards are too tight.

Bottom line, it's difficult to even cover NAR statistics, the comments are almost always out of alignment with other housing reports and general market conditions. We believe the actual pending home sales statistics are accurate at least.