The excellent blog, My Budget 360, has a very interesting and important article today entitled 10 States with Underemployment Rates of 20+ Percent. Manufacturing Sector Employs Same Number of Workers that we did in 1940. It is a hard hitting piece that amplifies concerns raised here on many occasions regarding the ill-effects of globalization. And they have some nice, powerful graphs in support of their arguments.

For instance, on the underemployment issue, consider this data:

One thing that is clear is the employment situation is in a major funk. 10 states now have underemployment rates of over 20 percent. We are talking about Great Depression statistics here: 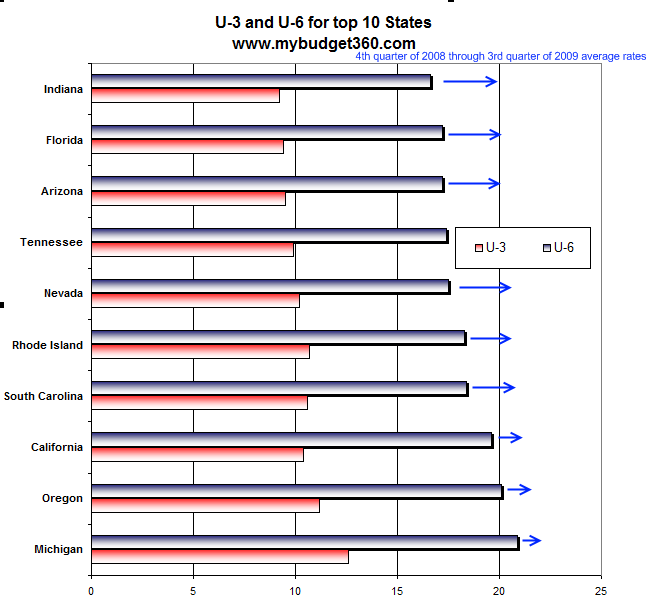 The above data is pulled from the Bureau of Labor and Statistics and is an average from the fourth quarter of 2008 to the end of the third quarter in 2009. In other words, the data above is optimistic and doesn’t use the latest data that is even higher. For example, California recently reported their U-6 rate is now up to 22 percent. Michigan? Their U-6 is now closer to 25 percent. There is nothing remotely close to a recovery in the data above.

They also track the destruction of the US manufacturing base and it's implications for recovery. 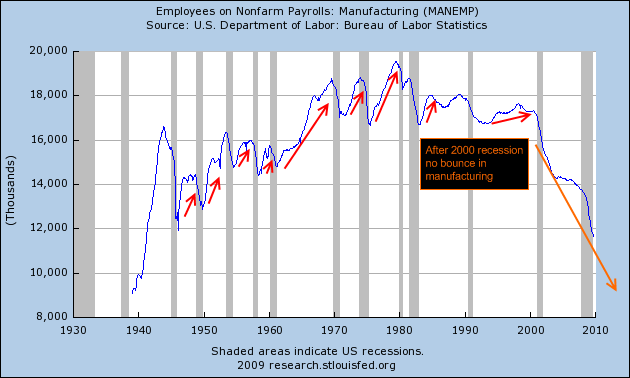 This recovery is unlike your daddy’s recovery because multinational companies can leverage cheap labor and a pathetically weak dollar to increase business overseas. In past recessions when we actually had a manufacturing base, once the recession started ebbing you started to see domestic production pick up thus bringing people back to work.

There is more at the link including a look at the record high levels of "long term unemployment" with a realistic assessment of how many of those jobs will ever return as we adjust to a "new economy".

Right now we have some pointing to the positive manufacturing numbers and this great news....but they fail to note that esp. since the China PNTR (trade agreement) went into effect in 2000, we have the incredibly shrinking U.S. manufacturing base. So now, it's plain too small (about 12.2% of overall GDP contribution) to generate the needed jobs.

Gee, it's only over 25% of all jobs are offshorable and offshore outsource them....they are!

This is ignoring the probably much larger statistic that jobs are being created overseas, by U.S. MNCs....instead of in the United States.

Subprime meltdown over; now comes the bad news - 88221 reads
New Budget Deal Cuts Social Security, But How? - 94480 reads
Unemployment and Recovery - 19584 reads
Saturday Reads Around the Internets - Financial Sector Grows - 36018 reads
Who Let the Dogs Out - Will The Senate Man Up on China's Currency Manipulation? - 34754 reads
Identity Politics and Economic Reality - 63212 reads
What is the CFPA? - 106302 reads
VAT or Value Added Tax is Getting a Look in D.C. - 261704 reads
Report: Disability Claims and Awards Declined - 29333 reads
Over Half a Million Drop Out of Labor Force, Participation Rate at Record Low - 26555 reads