Corporate profits per unit also set a record.  That's not due to increased prices and because this is profits per unit, it's not an incredible in sales volume.  Nope, corporations are making out like bandits because they are squeezing workers, continuing their practice of labor arbitrage and also cashing in on very low interest rates. The BEA reports corporate profits in a variety of ways and it seems whatever one's focus and political predilections are implies which number they use.  Below are some of the other ways of viewing corporate profits, but anyway ya slice it, corporations are simply getting more of the American pie while workers go without.  By any measure corporate profits are hitting records in Q3.

Corporate profits with inventory valuation and capital consumption adjustments, after tax, increased 2.6% from last quarter to $1,712.2 billion and are up 8.8% from one year ago. Corporate profits with inventory valuation and capital consumption adjustments, pre-tax, increased 1.8% from Q2 to $2,125.7 billion and have increased 5.6% from a year ago.   These are profits from current production. Net cash flow, with inventory evaluation adjustment soared 11.4% from Q2 to $2,287.8 billion.  This is a 3.6% change from a year ago.   These are the corporate funds available for investment according to the BEA. 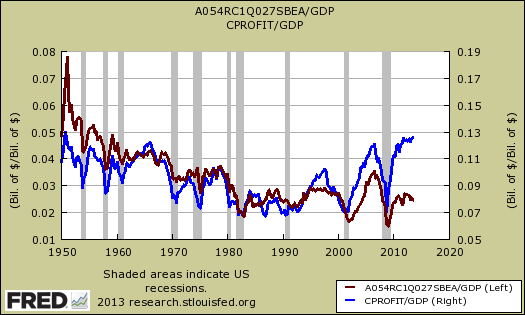 Bottom line no matter which metric the BEA uses to report corporate profits they all are soaring.  Obviously corporations and Wall Street are doing fine while workers and wages languish.