Seasonally adjusted headline retail sales rose just 0.1% in September while August sales were revised 0.2% lower and July's sales were revised 0.1% higher, resulting in an advance sales figure statistically unchanged from last month's report.  The Advance Retail Sales Report for September (pdf) from the Census Bureau estimated that our seasonally adjusted retail and food services sales totaled $447.7 billion, which was an increase of 0.1 percent (±0.5%) from August's revised sales of $447.2 billion and 2.4 percent (±0.7%) above the sales of September of last year.  August's seasonally adjusted sales were revised from the $447.7 billion first reported to $447.2 billion, while July's sales, which were revised up to $446.9 billion from the originally reported $446.5 billion last month, were revised up again, to $447.1 billion with this report.  Estimated unadjusted sales in August, extrapolated from surveys of a small sampling of retailers, indicated unadjusted sales fell 5.6%, from $456,513 million in August to $430,925 million in September, while they were up 2.8% from the $420,516 million of sales in September a year ago, indicating a substantial seasonal and holiday weekend adjustment in this month’s report.

Since it's the end of the quarter for retail sales, we'll include the entire table from this report showing retail sales by business type, including the quarter over quarter data.  Again, to explain what it shows, the first double column shows us the seasonally adjusted percentage change in sales for each kind of business from the August revised figure to this month's September "advance" report in the first sub-column, and then the year over year percentage sales change since last September in the 2nd column.  The second double column pair below gives us the revision of the August advance estimates (now called "preliminary") as of this report, with the new July to August percentage change under "July 2015 r" (revised) and the August 2014 to August 2015 percentage change as revised in the 2nd column of the pair.  Then, the third pair of columns shows the percentage change of the most recent 3 months of this year's sales (July, August and September) from the preceding three months of the 2nd quarter (April, May and June) and from the same three months (July, August and September) of a year ago.  That pair of columns gives us a snapshot comparison of 2nd quarter sales to third quarter sales, which is useful in estimating the impact of this report on 3rd quarter GDP.  For the same details on the revisions, the table of last month’s advance estimate of August sales, before this month's revisions, is here. 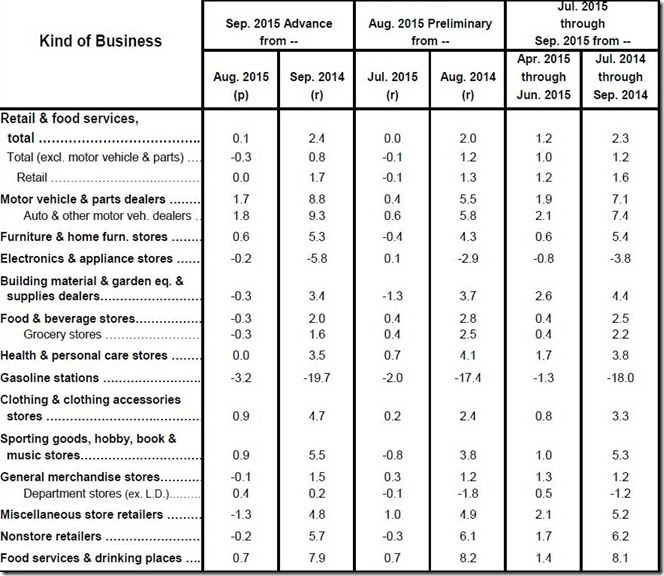 As we can see from the above table, it was once again the 1.7% increase to $94,684 million in sales at automobile and parts dealers that drove the September headline change; without those automotive sales, month over month retail sales actually fell by 0.3% to $353,002 million.  However, that drop of sales ex-autos was driven by a 3.2% decrease in sales at gasoline stations which was due to lower prices; excluding autos and gasoline, retail sales were relatively unchanged from August.  We can also see some retail sectors still saw relatively large increases; sales at clothing stores were up 0.9% to $21,620 million, sales at specialty shops such as sporting goods and book stores were also up by 0.9% to $7,444 million, and sales at restaurants and bars again rose 0.7% to $52,691 million. Meanwhile, building material and garden supply stores sales at $27,708 million and grocery store sales at $50,597 both saw 0.3% sales decreases, while sales at electronic and appliance stores and non-store (ie, online) retailers both fell 0.2%...

Another way of computing the impact of these sales on GDP would be to use the BEA's own computations from the personal income and outlays report of August, adjust that with this month's revisions to July and August, and add or subtract to that the change in real personal consumption of goods for September, which we can compute from this weeks reports.  When we looked at the personal income and outlays two weeks ago, we determined that over July and August, real growth in PCE had been at a 3.0% annual rate and would add 2.03 percentage points to the growth rate of the 3rd quarter.  In today's retail report, July's sales were revised up about $230 million, while August sales were revised down almost $500 million.  Thus a total of $270 million annualized, or about $4.4 billion, would have to be subtracted from previously published annualized PCE average for July and August.  (Normally we’d want to adjust that for prices, but we’ll forgo that because a tenth of a percent adjustment to a tenth of a percent revision would not materially change the results). Then to add September PCE to that, we need to adjust the increase in September sales for price changes to get the real quantity of goods sold.  The core goods sales are roughly 2/3rds of sales, which as mentioned we'd deflate with the CPI index for commodities less food and energy commodities for September, which was unchanged.  Removing food and gas sales from total retail we find real core sales were up about $1,200 million in September.  Then, adjusting food store sales for a 0.3% increase in prices, we find real food sales fell by $350 million in chained August dollars, and adjusting food service sales with the 0.5% increase in prices for food away from home, we find a real increase in food service sales of about $140 million.  On the other hand, since gas prices were down 9.0% while margins of fuels and lubricant retailers rose 8.1%, we have no idea on how to properly adjust the 3.2% decrease in gas station sales.   So ex gas, real sales were up by just about $990 million in September, which we'll estimate to be about $12 billion at an annual rate.  Plugging the $4.4 billion annualized downward revision to July and August and the $12 billion annualized increase in September real PCE into our original August 3rd quarter PCE growth rate computation, we can thus estimate that real PCE has grown at an annual rate of 3.14% in the 3rd quarter, excluding September services consumption data not yet published.  That suggests that with the data we have available, real growth in PCE would add 2.12 percentage points to the growth rate of the 3rd quarter, a 0.09 percentage point increase from our previous estimate.  That is in contrast to the impact figured by the Atlanta Fed, who saw this report take 40 basis points off GDP.

I hate to tell ya but the Atlanta Fed never misses on their calculations, at least not anything I've seen to date. Regardless the impact to GDP is nil.

in addition, they added 10 basis points on retail inventories, and i couldnt see that as anything but a negative...in fact, i have a sense that we'll see the largest hit from inventories in this recovery (i dont put numbers on that because i can't get a handle on how to deflate them, considering the multiple indices used, and that inventories from remaining from previous months are valued at the time they entered the inventory)

what bothered me about their change to their GDP estimate is that they released it the same day of the retail sales report, ie, before they had the consumer price data...you can't estimate real PCE without knowing price changes unless you're using some kind of voodoo..

I see the statistics on the average deviation for revisions but still it makes these reports seem like made up numbers.

BTW: Titles need to be shorter for articles.

Thx for publishing these, I've had a death in the family, now very behind with writing.

i normally review the revisions in this report, but they hit us with 6 major releases over a 50 hour period that week, and i have reserved my Saturdays for my oil market analysis, so i had to cover all those all those reports by Saturday morning to mail on Sunday...

last week there were just 3 reports, new housing starts, existing home sales, and state jobs reports, none of which i cover in depth, so with just two paragraphs on each i had nothing to post here...almost brought my oil coverage over here as an instapopulist, but it's the time of year where i'm rushing to get battened down for winter, and i got busy with that work...

i will have to come up a better way to express effects on GDP...maybe "basis points" instead of "percentage points"...i think it's important to include in the headline so readers know i'm not just regurgitating a press release..,another problem is at this time of year, all the months are three syllables...maybe i'll switch to abbreviations for the months...