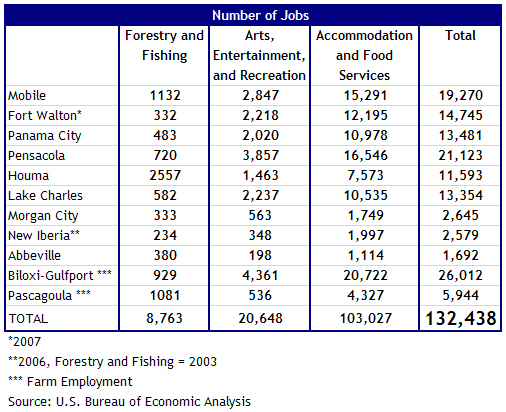 We can measure the number of jobs at risk, however. Across Florida, Louisiana, Alabama, Mississippi, and Texas—the states likely to be affected most directly—total employment in tourism-related industries and agriculture was about 2.6 million (in 2008), or about 14 percent of total employment in those states. However, if we narrow our scope to metropolitan statistical areas along the Gulf Coast of the most affected states, the numbers are much smaller—just under 132,500—with most being in the accommodation and food services industry.

Obviously this will not bode well to our never ending high unemployment rate, regardless. So why is there no immediate federal direct jobs program? Last news I heard the Obama administration was considering such action.

The Atlanta Fed states clearly estimates are ongoing and due to the nature of this disaster, ever changing, it is impossible to ascertain the true economic impact. Yet from another report, we have these details: