Ah, currency wars, quantitative easing, gold, silver and QE2. Much is being written on what the Federal Reserve will do next, with gold prices soaring and the dollar dropping. 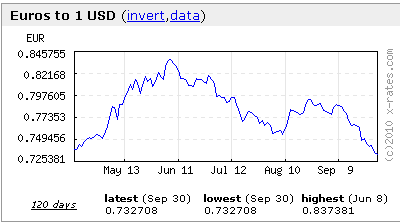 The dollar faces a rough time ahead. How rough, depends on the Fed.

Confirmation that quantitative easing was coming to an end would have been dollar-positive, helping the U.S. currency to resume the rally that seemed to be underway at one stage this summer. But now, as more negative U.S. economic data stacks up and concern over the global recovery in general increases, QEII looks much more likely to reign.

As a result of the conjecture that the Fed will engage in QE2, we have traders watching economic reports like a hawk, plus gold bugs hedging against a falling dollar, reacting every second, pouring over economic reports.

Yet the Wall Street Journal reports the Fed is considering bond purchases:

Rather than announce massive bond purchases with a finite end, as they did in 2009 to shock the U.S. financial system back to life, Fed officials are weighing a more open-ended, smaller-scale program that they could adjust as the recovery unfolds.

The Fed hasn't yet committed to stepping up its bond purchases, and members haven't settled on an approach. After its meeting last week, the Fed's policy committee said it was "prepared" to take new steps if needed.

In the midst of that, today we have some new calculations on money velocity, due to the revised Q2 GDP report. I just casually glanced at these graphs on money velocity from the St. Louis Fed and said, holy cow, Banksters, people and corporations are just sitting on their cash.

What is money velocity? It's the rate at which money is being exchanged in the United States. Say you buy a Popsicle from Bob's small store and Bob pays Joe for cleaning the floor, Joe buys a cheeseburger from Billy Bob's Fat Shack...well, you get the idea. In mathematical terms, it is:

is glorified GDP and

Now take a look at the latest updates on M1 and M2 velocity. You can see money just ain't movin'.

Now the hyperinflation people look at the two below graphs of the actual money supply, M1 & M2 respectfully. So, while hyperinflation folks freak out, the fact remains money is not moving, people are not hiring and people are not spending, I believe this bodes for more quantitative easing that many are projecting. But bottom line, it seems nothing is making money move and that's because most people don't have any. Of course the super rich have even more than before the financial crisis, but they have a tendency to sit on it. Jobs seems to be the key to all things, although lowering the value of the dollar might help with the trade deficit.

Here are the definitions of M1 and M2:

M1, the more narrowly defined measure, consists of the most liquid forms of money, namely currency and checkable deposits.

Can you tell currency trading is loaded with men with a statement like the above? How about the self-absorbed boy at the dance being the last picked?

It looks very strong, to the point GS has already priced in QE2, the big surprise would be the Federal Reserve does nothing.

(also due to the weak factory report. I've read a slew of analysis on the ISM and frankly, the prices are just not that huge of a deal if one looks at the history, but new orders sure as hell are and so is unemployment, so manufacturing being in trouble ....what is new about that?)

QE2 is going to happen, Bloomberg.

That all said, so what, I will update money velocity after the effects of the Fed have sunk in, and note, it's a ratio, velocity, increase money supply, have more uberrich sit on it, buy commodities or whatever, the ratio can actually decrease.

If they handed the money to the poor on the other hand....

While this post is a week old, looks like it's happening, all believe the Fed will buy more debt, start QE2.

I think this is all ridiculous, we need direct jobs, income to stimulate the economy. They already pumped absurd amounts of money into the system and you can see velocity and that's due to all of that money not translating into production, i.e. GDP, i.e. growth.