The BLS JOLTS report, or Job Openings and Labor Turnover Survey describes the pathetic job market. Once again, little has changed and the July 2012 statistics show there were 3.49 official unemployed persons for every position available*. There were 3.664 million job openings for July 2012, a 1.56% decrease from the previous month of 3,722,000. Openings are still way below pre-recession levels of 4.7 million. Job openings have increased 68% from their July 2009 Mariana Trench trough, yet real hiring is a distant memory. There were 1.8 persons per job opening at the start of the recession, December 2007. The job market is horrific and worse than last month. Below is the graph of July official unemployed, 12.794 million, per job opening. 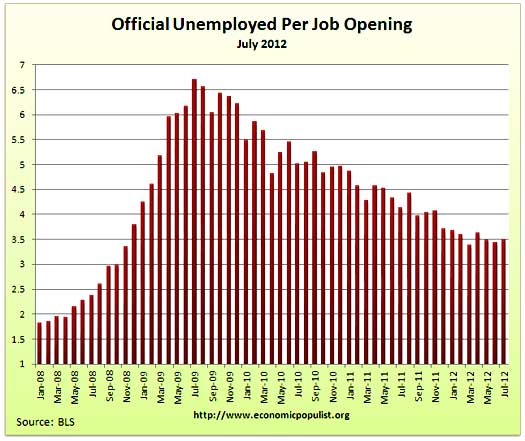 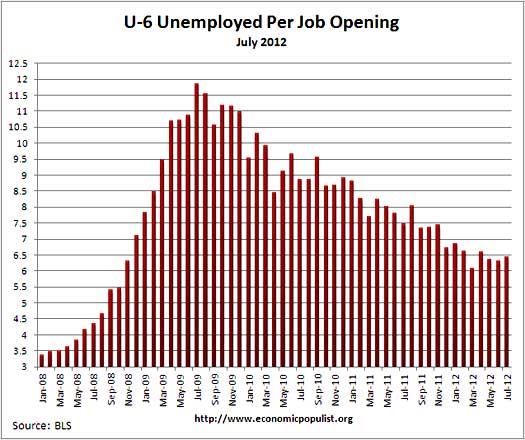 The rates below mean the number of openings, hires, fires percentage of the total employment. Openings are added to the total employment for it's ratio. Only the separations rate changed from last month, it declined by 2 percentage points after revisions and this is because less people were fired and laid off. The job market is stagnant and a dead pool. July hires were 4.229 million, a decrease of -1.28% from June. Hires are a flat line, showing the death of the U.S. citizen labor market. Since the July 2009 trough, actual hires per month have only increased 15%. This is simply terrible as an indicator for employers are clearly refusing to increase hiring, across the board.

Over the 12 months ending in July, the hires rate (not seasonally adjusted) was unchanged for total nonfarm and total private but increased for government. The hires rate was little changed in all industries over the year but increased in state and local government. The rate was little changed in all four regions over the year. Below are total job separations, 4.058 million, a -4.5% decrease from last month. The term separation means you're out of a job through a firing, layoff, quitting or retirement. Layoffs and firings are to pre-recession levels. Every month the JOLTS report looks like employment musical chairs. We have an unchanged 1.8 million overall yearly job gain.

Over the 12 months ending in July 2012, hires totaled 51.4 million and separations totaled 49.6 million, yielding a net employment gain of 1.8 million. These figures include workers who may have been hired and separated more than once during the year.

Graphed below are people who quit their jobs minus those who were fired and laid off. The lower the bar on the below graph, the worse labor conditions are. The number of quits were 2.160 million for July and are still way below pre-recession levels of 2.8 million. People are clearly not voluntarily leaving their jobs because the job market is so bad, even though the jobs slaughter of 2009 where people were laid off and fired in mass appears to be over. , and also not seasonally adjusted. The above graph was created by the seasonally adjusted levels of the unemployed, part-time for economic reasons and the marginally attached, raw totals. If one uses the below formula, we get a slightly higher ratio of 6.45.

Job openings one has to question if employers are just putting up snow to obtain more foreign guest workers and to outsource, and/or if they are being so unbelievably picky they simply do not want a human being in the position.

JOLTS was actually released September 11th and because there is just so little movement in the statistics, I weren't going to overview the report.

I changed my mind with Bernanke using the the jobs crisis to justify open ended quantitative easing to show how stagnant this is.

It is NOT a skills mismatch. We skipped the Beveridge curve graph because we are so stuck in a jobs crisis for so long, even that graph has become impossible to read. There is only so long one can place a data point on top of a data point, as they barely budge and are on top of each other year after year. That said, there is NO skills mismatch. It's not an employee problem, it's an employer problem. See the bottom links for the BLS graphs.

The army of unemployed out here can tell you indeed.com and all the other relevant sites are showing fewer and fewer positions. If someone's unemployed out here in the US in 2012, he/she can quickly tell you from personal experience that the same jobs are being posted month after month or taken down and then reposted. Long-term unemployed will have all the miserable intel on the state of the US worker and non-existent jobs. Temp firms always solicit resumes and then never get back to people, or even have them come in for interviews, fill out extensive forms, talk to them for 10 minutes, promise all sorts of great opportunities sure to come soon, and then radio silence - they will also ignore every email or phone attempt to reach them. While fake jobs were posted with more frequency, now it's basically temp firms and it's easier to spot them because no temp firm has so many new jobs every day at the salaries they quote. Also, check out craigslist and other major sites that are demanding people work for free for "experience."

Also, check out the forums on indeed.com by frustrated job seekers, sites for unemployed support or city-data sites. Also about.com has thousands of tales from people talking about their situations (everything from new MBAs that can't get started to IBM workers fired at 50 after training their replacements). I trust those sites far, far more than any govt. propaganda or press. The real experiences of the folks struggling gives us far more real, believable info. and clearly flies in the face of govt. and business lies that "workers suck in the USA, and we're ready to hire except for uncertainty and the fact that Americans are unskilled welfare addicts."