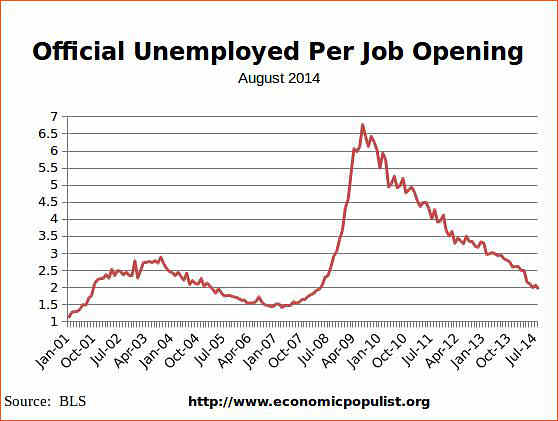 If one takes the U-6 broader measure of unemployment that includes people who are forced into part-time work and the marginally attached, the ratio is 3.9 people needing a job to each actual job opening.  In December 2007 this ratio was 3.2. 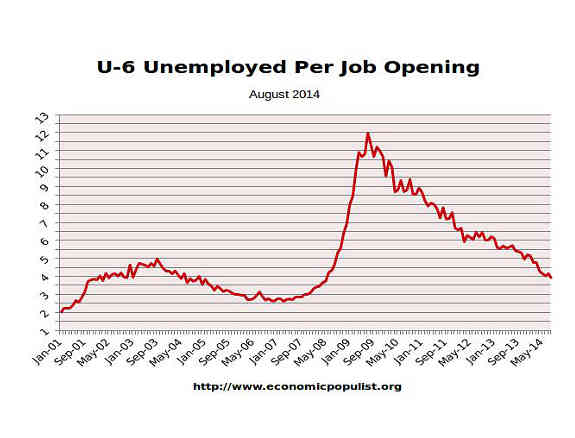 Job openings have not been this high since January 2001, the height of the dot con bubble.  By either measure it is clear job openings have finally returned to pre-recession levels.  Yet, the BLS JOLTS report shows any job opening, regardless of pay or hours.  There is no information on the ratio of part-time openings to full-time ones.   Graphed below are raw job openings.  Currently job openings stand at 4,835,000.  This is still in stark contrast to the 9,262,000 official unemployed. Since the July 2009 trough, actual hires per month have only increased 27%.  This is simply terrible and the most important indicator in our view for employers are clearly refusing to increase actual hiring.  Businesses can say there are job openings, but if they do not hire an American and fill it, what's the point?  Currently business tries to claim people are not trained, when in truth one must provide on the job training.  In truth, businesses are trying to squeeze workers and import cheap labor instead of hiring Americans at middle class wages and benefits.  Below is the graph of actual hires, currently 4,640,000.  Hires actually declined from July by -6.0%. Graphed below are total job separations, currently at 4,440 million.  The term separation means you're out of a job through a firing, layoff, quitting or retirement and is also called turnover. Layoffs and firings were 1.580 million.  Below is a graph of just layoffs and firings.  One can see from labor flows while businesses are not trashing their workforce so much.  Labor flows means the way people are hired, stay at a job, quit, get fired, get another job and so on.  It is the overall flow of the labor market for as people are get jobs, they also lose them. Graphed below are openings, separations and hires levels, so we can compare the types of labor flows.   While layoffs have declined to pre-recession levels, it is the flat line hires (blue) that is the problem, beyond not enough job openings (red) for the unemployed.  There is simply not enough hiring going on still.  The below figures also disprove a labor shortage.  A labor shortage would imply more job openings than unemployed available to fill them.

Graphed below are people who quit their jobs minus those who were fired and laid off.  The lower the bar on the below graph, the worse labor conditions are.   Workers quit their current jobs often to obtain better ones.  People feeling free enough to leave their current positions is considered a positive labor market sign. . Quit statistics are still way below pre-recession levels of 2.9 million.  This is another JOLTS statistic the press is trying to make it sound like the labor market is healthy.  Quits were 2.473 million.  People quitting their jobs has increased 51% since September 2009 but are still below pre-recession levels. Over the 12 months ending in August 2014, hires totaled 56.2 million and separations totaled 53.6 million, yielding a net employment gain of 2.5 million. These figures include workers who may have been hired and separated more than once during the year.

The BLS publishes a Beveridge Curve graph, reprinted below.   The Beveridge curve shows the official unemployment rate vs. the job openings rate, over time.   If you see a bunch of data points to the far right, that's bad, it means there is long term unemployment and not enough jobs.   Up and left in the Beveridge curve is good, it means there are jobs, people are getting hired, life is good.   A right and up move in the Beveridge curve can indicate a skills mismatch.   The green, representing the 2009 time period, shows how fast we went to the right.  The purple line is 2010-2014 still is finally back to the red line area, which was when the job market was deteriorating rapidly.  The left upwards portion of the graph which would indicate a healthy job market.  The red line, which wasn't that great of a labor market, is pre-recession.  The better news of this beveridge graph is showing just how far out the jobs market really went.  The graph also shows how fast the jobs market went bad and how slowly it has taken to recover even this much.  Short story long, the beveridge curve has dramatically improved but still not recovered. 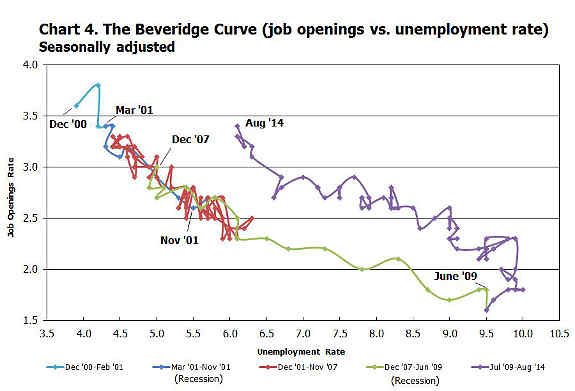 The August 2014 unemployment rate was 6.1%.  U-6 alternative unemployment rate was 12%.  JOLTS includes part-time jobs and does not make a distinction between part-time, full-time openings.  A job opening reported to the survey could literally be take out the trash twice a week and be counted.  This is a shame, it would be nice to know a little more about the quality of these new opportunities.  Here are our past JOLTS overviews, unrevised.

just looked at this report, after reading the WSJ hype about a 13 year high in openings, and how that's going to pressure wages ...job openings in restaurants, bars and hotels rose by 73,000 to 632,000; there were also 63,000 more openings in health care and social assistance and 40,000 additional openings in retail...

guess there must be a lot of competition for those barmaid and bellhop jobs..

types of jobs was something I wanted to get to, over the last year or so, or six months.

Unemployment has been a big problem for quite a while now, but I don't see how it can't be resolved. People are also extremely fussy when it comes to jobs, "I don't want to do that" or "That sounds like to much work for me". Companies are also making it quite difficult to get a job. Most companies want experienced workers, but they aren't willing to hire you so you could get some experience.