The attack on labor is in full throttle. We hear reports of outrageous pay for government workers with economic fictional spin. Pundits weave tall tales blaming the workers themselves as the reason for America's economic malaise. Actual wage statistics are never mentioned. Nor is the never ending income inequality in the United States and the policies which cause it. 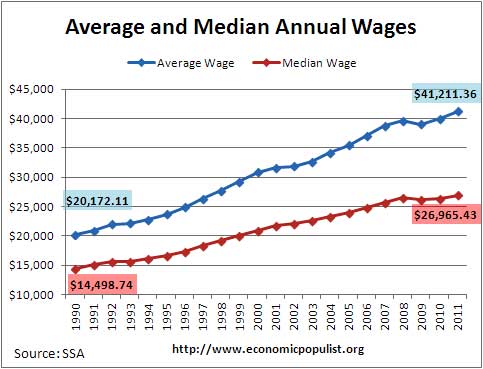 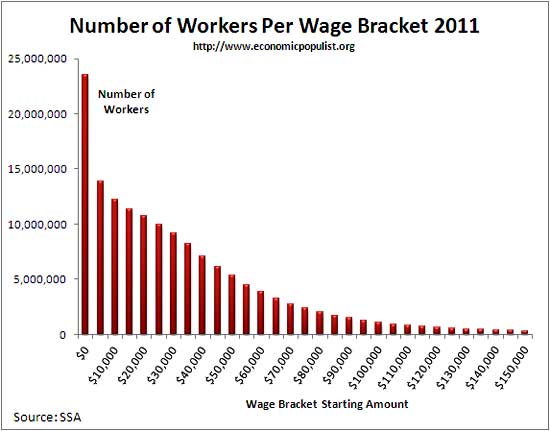 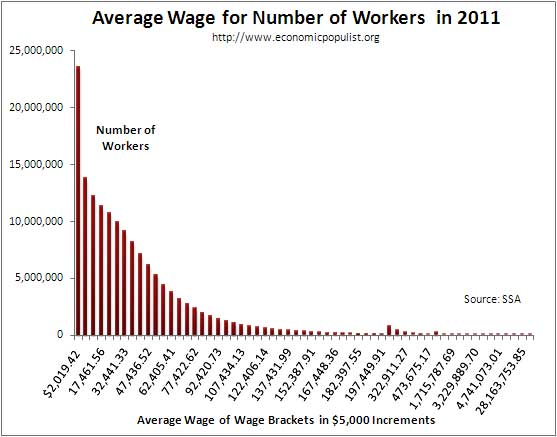 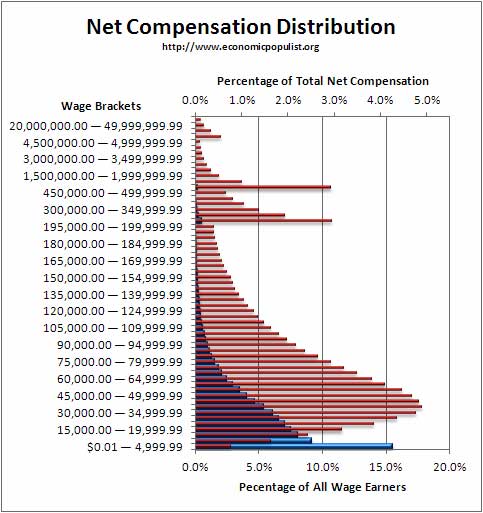 To put this in perspective, the top wage bracket is over $50 million. Ninety-three people have net compensation at or above this amount. As a percentage of total wage earners, these 93 individuals represent 0.000061434% of the total income earners in 2011. Yet this special group of 93 received 0.12% of the total net compensation earned in 2011. That means as a group, these $50+ millionaires have 1936 times more money distributed to them as a population size than say those earning less than $5,000 a year. This income inequality as it's finest and this is what America has become. 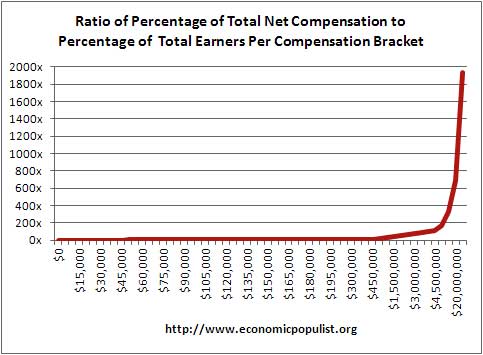 In spite of these never ending dire wage and earnings statistics, labor and their need for a decent wage are under attack. Just recently Michigan passed a right to work law, as usual, blaming unions for the piss poor economic conditions of Michigan.

People like Amity Shlaes belong with those who think the Earth is flat, created in six days, and certain behaviors will make you go blind. The question really needs to be asked is how these people are even given paper and pen, never mind any public forum. Making millions trying to rewrite history to some illogical warped fiction is frightening. Such spin is a black art that should be left on the ash heap of Joseph Goebbels' remains.

This op-ed amplified a study on right to work. Right to work statutes are designed to break unions by reducing their collaborative power. Unions help enormously in wages and benefits in statistical reality. While Michigan Republicans continue their attack on labor, unions might be able to put right to work on the ballot as an repeal initiative.

The average wages and benefits for nonfarm workers in right-to-work states was $57,732, while in states without the law it was $65,567. States with antidues laws have higher rates of poverty and lower rates of health coverage.

We also have a never ending attack on state workers, their pensions and wages. California's budget problems are not due to their $11 billion annual illegal immigration costs, or a bureaucratic nightmare system, according to pundits. Oh no, it's unionized state workers that is the focus of their ire, once again workers are the problem.

It's a theme that goes on and on in a myimid of ways. Workers are seen as a cost and wages as anti-competitive. We have over 15% of America on food stamps and declining consumer spending where disposable income is required, yet income and wages are not part of the economic recovery discussion. We're sorry, labor is not the problem unless you are a corporation and want to pay Americans the same wages as Bangladesh. That's what's going on here, a never ending worker squeeze and at this point that's blood from a stone.

We often hear pundits telling workers their jobs are going to China and not coming back and due to policies this is currently true. The monthly trade deficit statistics show how China is simply capturing our industrial base. China ships goods into the U.S. we used to make every day. Exports was a major reason the U.S. became an economic superpower after WWII. We literally handed China the keys to our kingdom by outsourcing our jobs and manufacturing abroad.

Now Generation Y is finding themselves stuck in dead end jobs, overeducated, in debt and not using their talents.

Generation Y professionals entering the workforce are finding careers that once were gateways to high pay and upwardly mobile lives turning into detours and dead ends. Average incomes for individuals ages 25 to 34 have fallen 8 percent, double the adult population’s total drop, since the recession began in December 2007. Their unemployment rate remains stuck one-half to 1 percentage point above the national figure.

Right now we have politicians claiming they are for the middle class. They feel our pain and empathize all the while enacting policies and agendas by and for corporations. Pundits spew soaring rhetoric as if pomp and circumstance trumps the stark economic reality most Americans are struggling with. Every single statistic shows wage repression, a widening gap between rich and poor. If trickle upon economics really worked we would be swimming in pools of gold instead of the never ending economic shit pile the American worker is in.

We hope all pay very close attention to deeds and policy and the people behind these politicians. Words are cheap. Yet the deeds of politicians have made us cheap. That's their accomplishment, the destruction of America's middle class.

For more details of past wage data see our popular post, wages in America, most of us are have nots and article Wage statistics pain a bleak picture.

Yup, that's about it, why bother saying anything else. 2012 and this is happening. But oh no, don't dare cry out against outsourcing, visa fraud + abuse, or corruption at all levels. 2012 and this is actually happening. But hey, just saw on HGTV some people built a luxury home in Phoenix and drilled 7 foot holes into the mountain to put beds into a mountain and on "Luxury Log Cabin Homes," some dude wanted what "pioneer families had," so he did what they did, which was apparently shell out tens of thousands of dollars for taxidermy for animals he didn't shoot/eat, use 250+ year old trees to build his 9,000 ft2 house that had to be driven down a half-mile private road by dozens of big rigs one at a time, and do it all like, you know, the pioneers did. Hey, all is well, tens of millions of my fellow citizens are unemployed + dying with no hope despite their skills and degrees and service, but the megarich are drilling into public mountains to build their homes and chopping down trees to build 9,000 square foot homes because it's the new Manifest Destiny baby. And if you're looking to the US Government for help and truth, well, me thinks tens of millions of other Americans might have some bitter experience with that over the last 400 years. This economy and government will turn anyone into a radical aka Payne or Jeffersonian freethinker. Less than $5k in 2012?! And we're living in a republic that's looking out for us? Yeah, whatever. Why don't the megarich and completely corrupt just build mini or full-size versions of Versailles while we're at it, and to keep it completely historically accurate, build them the same distance from major cities as Versailles was located from Paris. I mean as long as we're going down this path, let's go all the way, why half-ass it? Is there no shame, no foresight, no sense of history? Really?

To other sites, reddit and so on. Share buttons there for convenience or pick your favor online hang outs. The reason is this article uses IRS data, obtained from the social security administration which is very different from the Census "surveys" and much, much lower. I personally think taking information from actual tax records is way more accurate. Sure there is probably not reported income, but the way W-2s are set up, I imagine it's much more accurate than surveys.

These figures are almost never used by others to report income for economic reports and articles and that's why I hope this gets read.

People making less than $5k can be people who are not reporting tips and probably more accurately, people who didn't work much during the year. Still I agree with you that figure really contradicts the fact "America is the richest country in the world". Yes, it's rich for some, but not most.

This is just reflecting the fact that many people are absolutely working for nothing nowadays, for example, in the internships that we've brought up here and on other sites. Those pay $0 (and actually cost people to work in them because the intern has to pay for food, fuel, insurance, etc. while providing free labor) and are affecting every single industry and every age group. That plays a huge role because it's a not-too-clever way of avoiding minimum wage laws. Same for "fellowships" and other new job titles that drop wages for people with education and experience. Also, people are now forced into short-term contracts and freelancing. Despite all the business media hype about choosing your own adventure and ways to make billions as a freelancer, if someone doesn't get a freelance job for 12 months that pays $40,000 - whatever and enough to cover his own and his family's benefits, insurance, etc., then he/she is much worse off and the median salary should reflect it. And with more unemployed or contractors or freelancers out there scratching for any cash, the median wage has to drop and employers can lower their wages further in return for labor.

Read gawker unemployment stories, I think it's up to volume 20, those are great and typical stories of the situation on the ground. Absolutely accurate, vast majority are typical, "Lost a job, searching for 1-5 years, overqualified or can't find anyone to hire me after college or grad school, replaced by cheap clueless labor that kisses ass, lost house/apartment, networking and job applications are so much bull, etc." Society simply can't have this many people earning $0 or just enough to pay for food but no rent or no car if a vehicle is needed for a job.

Greece was on PBS last night. Central banker admitted things will get tougher, already at 50% unemployment and people are suffering from preventable diseases because of crumbling health care system. But he said the people should have faith that when the recession is over, austerity will have worked out for them. The question that wasn't immediately asked is why aren't central bankers and politicians suffering with the populace too and only get to impose it? Other questions: how long can/should people suffer? when will the recession end and how did he know it would end when they can't predict or do anything effectively to begin with? why should people go homeless and/or watch loved ones die when people at the top that are corrupt and/or never busted their ass or behaved ethically are rolling in millions and billions of dollars?

The news for two months in the main stream press has been the fiscal cliff. Nary a mention, beyond this site, income, wages and work is what will fix the deficit. No work, no tax revenues.

The shape of the distribution and the amount of people earning less than 30k is a bit sad. A graph with the purchasing power compared to the average salary would help!

I will consider researching into PPP but last I checked the U.S. had much worse purchasing power after exchange rates than say India, but we'll see if I can research and number crunch the stats. Worldbank/IMF databases are a pain to even exact out what is needed.

While growing up my dad always told me that if I was honest and worked hard, I could get ahead. For 35 years I worked my ass off but I couldn't figure out why I wasn't gaining any ground, but instead, was always lagging behind. And in the end, what did it get me? An arthritic back and unemployment because I had the nerve to turn 50 years old.