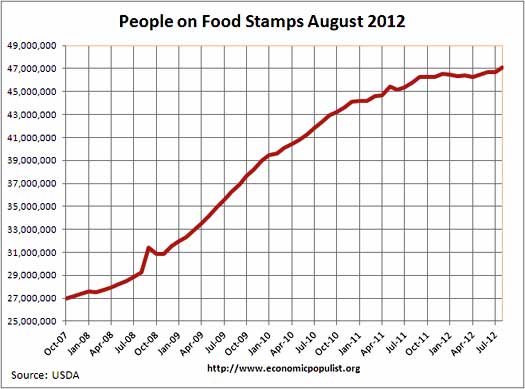 Since October 2007, food stamp usage has increased 74.4%. Population has increased 3.9% during the same time period. That is how badly America is hurting.

This is the largest monthly increase in food stamp usage in a year, graphed below. 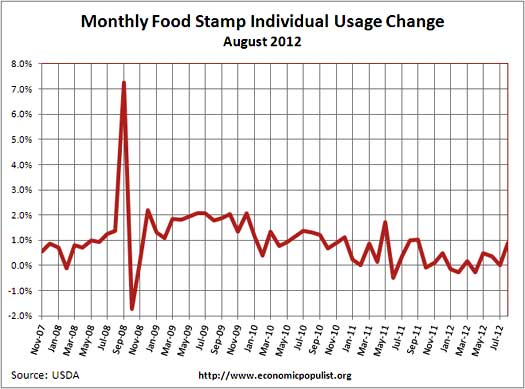 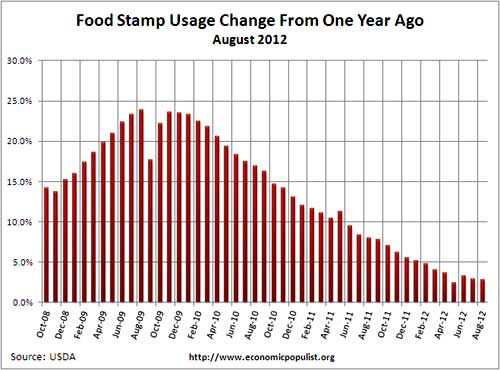 Below is the yearly percent change in food stamp usage per state. As we can see with the recession claimed to be over in July 2009, we still are seeing more people going on food stamps. Population increased only 1.4% from August 2011 to August 2012. 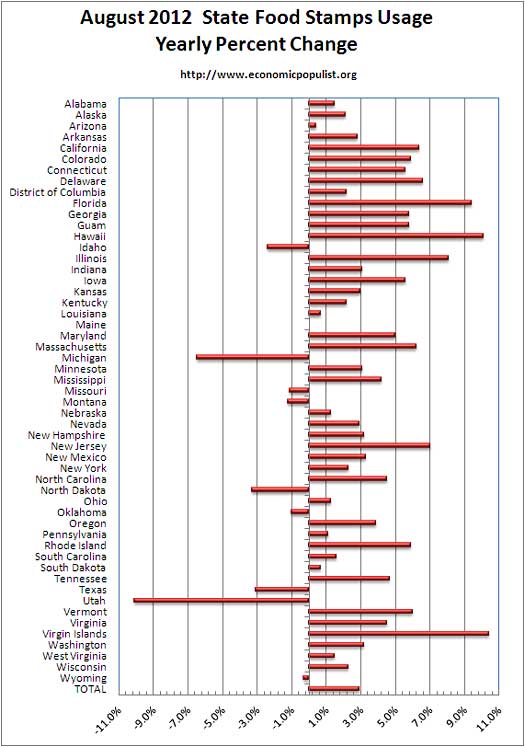 You may have heard the USDA is promoting food stamps to illegal immigrants from Mexico as part of the election 2012 rhetoric.

USDA and the government of Mexico have entered into a partnership to help educate eligible Mexican nationals living in the United States about available nutrition assistance. Mexico will help disseminate this information through its
embassy and network of approximately 50 consular offices.

Officially, food stamps are not available to those in the country illegally, although if anyone in the household is legal, that person can receive food stamps. Supposedly there is a program to verify social assistance eligibility, SAVE, but not all states use it and worse, some just take their word on it that the social assistance beneficiary is legally in the country.

In May 2012 it was estimated there were 6 million people whose only income was food stamps. That means they are living on the streets with absolutely nothing else.

The Republican side of the Senate budget committee has been on a tear about welfare. In reading the Congressional Research Service report on Federal welfare expenditures, it is shocking how much cash is being handed out, as well as the massive amounts of various welfare programs. Federal welfare for fiscal year 2011 was $1.03 trillion, more than social security, or even national defense. Unlike the GOP, the Congressional Research Service is objective, non-partisan, so interpret these figures as you will. Most of the increases were due to the 2009 Stimulus or ARRA. From the CRS report:

Senator Jeff Sessions sees it a little differently and is also the Senator querying on how many illegals might be receiving welfare benefits they are not eligible for.

Ranking Member Sessions and the minority staff of the Senate Budget Committee requested from the nonpartisan Congressional Research Service (CRS) an overview of cumulative means-tested federal welfare spending in the United States in the most recent year for which data is available (fiscal year 2011). The results are staggering. CRS identified 83 overlapping federal welfare programs that together represented the single largest budget item in 2011—more than the nation spends on Social Security, Medicare, or national defense. The total amount spent on these 80-plus federal welfare programs amounts to roughly $1.03 trillion. Importantly, these figures solely refer to means-tested welfare benefits. They exclude entitlement programs to which people contribute (e.g., Social Security and Medicare)… Spending on federal welfare programs is up 32 percent since 2008, and now comprises 21 percent of federal outlays.

We can interpret the massive increase in Welfare many different ways, but our take is this is what happens when jobs are lost abroad and the middle class is bone sucked dry of wealth and income.

Zerohedge outlines how disbility benefits have also increased. While their data is correct, you might ignore the conspiracy theory chatter. Superstorm Sandy delayed a host of statistics last week.

This is an update to our popular post overviewing food stamp usage.

It would be more accurate to describe this as food stamp program eligibility rather than food assistance. If you research the massive program fraud occuring, the real story is how many people receiving benefits do not need food and sell their cards for cash.

I have no doubt that a certain small percentage of people abuse Food Stamps but you seem to think it's a lot. Why is that? What percentage of food stamp recipients sell their cards because they have lots of money? I know some sell their benefits at a loss because they desperately need cash -- or think they do (to purchase various substances).

When you look at how wages have stayed the same or have decreased for many families while the cost of living has continued to rise, we clearly do have many needy people.

I think the needy are far more important and numerous than the cheaters.

Jobless: Yes. I am talking about people who sell their cards at a discount. I am a lawyer in a small town with alot of poverty and am aware of both the need and the abuse. The USDA itself acknowledges the tremendous fraud and suspend and/or prosecute when they can but it is difficult to prove.

Well, if you are that well-informed, then you must know that the social welfare programs have not begun to keep up with inflation over the past 30 years.

Aren't lot of people who sell Food Stamps doing it to pay rent or keep their lights on than for other reasons?

Yes, addicts will do things they aren't supposed to do. Yes, women with drug selling boyfriends who pay all their expenses go to Welfare and flat out lie to get benefits.

But why focus on them? They are not the real story here. Society has always had the undeserving poor and always will.

The undeserving poor unfortunately have kids and the children must be helped as best we can.

The deserving poor have always been scapegoated for the acts of the undeserving poor. That is wrong and we should be taking steps to eliminate that.

Jobless:
For the deserving poor to get the help they need, the program has to have integrity. When people cheat the government and lie, including those well-offs who buy and redeem the benefits, defrauding on the back end, it puts the program in jeopardy and takes benefits from the deserving. Because it is so widespread, per usda, we all should be concerned and demand a more competent program.

"When people cheat the government and lie" it does suck, doesn't it? Like Bill Gates and other current and former CEOs claiming they just can't find "qualified" Americans; that there's a "skills gap,"; that sending credit card + SSNs and personal financial and medical information won't cause massive ID theft and won't cause massive risk to Americans that American citizens and American law enforcement will have to deal with for decades; that American taxpayers have to pay for millionaire banksters betting on derivatives and other instruments they don't understand despite creating and betting on because the FDIC backstops all such BS bankster plays; etc. "Deserving poor"?
Please sir, I'd like to feed my family and enjoy my Bill of Rights. I apologize, some people I know have degrees, served our Nation, and worked long and hard and never stepped on anyone else. Are we deserving, Sir? Please, Sir, can I have some more food?

DESERVING POOR?! ON THANKSGIVING?! Jamie Dimon is knocking and he wants props and rights back for Scrooge. Charles Dickens is rolling over in his grave. "Deserving poor." I give up. WTF. Read, read, and read some more. Deserving? People are literally earning $1 billion+/yr. for sitting in front of computer screens and losing to market INDEXES while others lose limbs for less than $30,000 or work for free despite having BAs and graduate degrees and more than $200,000 in education loans and knowing multiple languages, 10+ years of work experience, etc. DESERVE? Yeah, Koch PR, is that you? Damn, why would you "cheat the government and lie" by trading with Iran in violation of sanctions? For $? That doesn't sound honest or patriotic, does it? Why would you "cheat the government and lie" about breaking environmental laws? That doesn't sound very honest or patriotic? Walmart? Is that you? Why would you cheat and lie about locking workers in overnight posing the risk of death if a fire broke out? That's not cool. Why would you lie about bribing Mexican officials? JPMorgan? Lying about bribing Jefferson County officials? HSBC? Lying about aiding and abetting terrorists and drug cartels by laundering money for them? Standard Chartered? Wells Fargo? Is that cheating and lying? Oh poor banks and poor corporations. How you must suffer. Poor Murdoch. Breaking corruption laws for bribing police and hacking phone lines (although always careful to make sure his subordinates are only implicated). But look out, it's dem crazy poor in the US we must be on the look out for. Oh, so scary. "I see poor people! And they're growing in numbers! Oh no!" You want to know how many smart, ethical, patriotic Americans are suffering in their own country in 2012 despite all the skills, education, and incredible work backgrounds? Take a guess. Is it: A) a minute amount; or B) a massive number? Take a guess. Go ahead. On Thanksgiving, go ahead and insult tens of millions of Americans. Because the answer is B, but I guess they just aren't "deserving" or worthy of recognition and respect.

Denigrating the poor on Thanksgiving, no, this should not stand.

Well, I guess I am not going to make any headway here. But there's nothing that cheaters do that jeopardizes the various social assistance programs. The people who want to cut out or cut back these programs feel that way period. If there was no fraud they'd still want to eliminate them.

If you have suggestions for making our social benefit programs better, then make them. But the money it takes to locate that last bits of lying and fraud often cost more than is recouped.

But consider this: Taxpayer fraud is rampant but we have reduced audits drastically. Why?

Why do so many law firms advertise ways to "protect your assets from the nursing home?" all over America?

We allow people with money to dodge their taxes and get Medicaid to pay for their parents' and grandparents' end of life care.

Why are taxpayers allowed to cheat the government of hundreds of billions a year?

Why the focus on the peanuts while the big, meaningful money goes ignored?

Could it be that people are looking for any excuse to limit and reduce benefits, while they want to dodge the taxman themselves?

I also place a big premium on honesty and integrity too, by the way. Don't think I don't. But how are we being honest when we give the disabled and unemployed next to nothing to live on and demand that they live on it without breaking rules?

How are we being honest when our minimum wage is so low, yet again, we demand that people live on it when we ourselves could not?

We discourage our honest needy all the time. It is sickening to think about. I think much of the rage surrounding benefits comes from those who are low wage earners and need them too, but they make too much to get them. They are quite right to feel frustrated that they need help but can't get it.

I agree, America is hurting. So, and forgive the transition, is now the opportune time to raise tax "rates"? We did hear a couple years ago, from the president, raising taxes on a weak economy is a bad idea. Why do you think the push now?

We've shown this over and over again. Cutting taxes on the rich doesn't not create jobs.

The only taxes under consideration to be raised are [personal income for those making $250k and over for couples.

Folks claiming people are cheating and making money off of their food stamps, $133.42 per month is the average benefit.

Wow, that's really some financial haul there to cheat off of. Let's see, what kind of riches can one get if they are cheating from $133.42 a month.