The vast majority of the U.S. $727 billion 2011 goods trade deficit is due to "intra-firm" or "related party" trade,   This  is, trade between two units of the same corporation, according to the U.S. Census Bureau.  This is significant because such trade is the most open to companies manipulating the prices between subsidiaries to minimize tax liabilities, usually known as abusive transfer pricing.   Moreover, as Stuart Holland argued in 1987, intra-firm trade is also less responsive to changes in exchange rates than is trade between independent businesses, since within an individual multinational corporation each subsidiary will have a specific role to play in its supply chain, which won't be quickly changed.  The below table shows the total 2011 goods trade and then just the intra-firm trade.  2011 amounts are for all nations and then a breakdown of some selected countries.

As we can see, related party trade (which can mean trade within either a U.S. or foreign multinational corporation) is 27.6% of goods trade, but it represents a whopping 95.0% of the trade deficit. Moreover, in countries where the U.S. has heavy foreign direct investment, such as Canada, Ireland, and Mexico, the trade deficit for intra-firm trade actually exceeds the country's overall trade deficit.

In fact, virtually all U.S. imports from Ireland take the form of intra-firm trade. This is no doubt due to Ireland's status as a tax haven and low corporate income tax rate of 12.5%.

These data suggest that much of the U.S. trade deficit is due to U.S. corporations offshoring production and exporting the products back home. As the related-party data does not distinguish between U.S. and foreign multinationals, there is no way to know exactly how big the share of U.S. multinationals is in intra-firm, but is surely much more than half. Moreover, not counted in the data are imports that come from subcontractors (Wal-Mart's many suppliers, Foxconn producing Apple products, etc.).

The bottom line is that we need to reverse the incentives in the tax code that encourage the offshoring of jobs. (Why does Apple have $64 billion in cash abroad?) However, to emphasize the point I made last time about what Americans want out of tax reform and the "reform" that has actually happened, it's worth pointing out that Robert Gilpin of Princeton University, author of the seminal U.S. Power and the Multinational Corporation (1975), made the same policy recommendation almost 40 years ago, and it hasn't happened yet. We've got our work cut out for us.

UPDATE: Following the Mitt George Romney rule ("one year might be a fluke"), I went back and collected the  related party goods trade data for all years back to 2002 (the earliest for which the related party trade info was available). While 2009-11 were all 95%, previous years were generally between 70% and 80%. I'm not sure yet what to make of that. 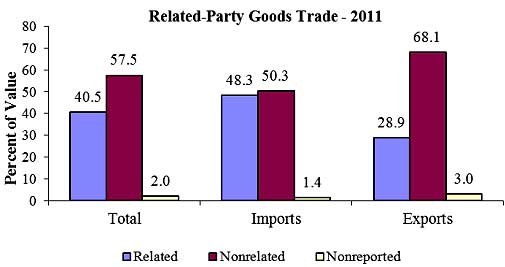 The definitions for what related party trade are:

Imports: As defined in Section 402(e) of the Tariff Act of 1930, related-party trade includes import transactions between parties with various types of relationships including “any person directly or indirectly, owning, controlling or holding power to vote, 6 percent of the outstanding voting stock or shares of any organization.”

Exports: The Foreign Trade Regulations, 30.1, define a related-party export transaction as one between a U.S. exporter and an ultimate consignee, where either party owns, directly or indirectly, 10 percent or more of the other party.

This is actually only goods trade. Offshore outsourced call center, I.T., engineering, legal are all services and the breakdown of services data is hard to come by.

Second point to amplify is this is only subsidiaries. As noted in the above piece, there are a slew of manufacturing offshore outsourced that use 3rd parties, such as Foxconn and so on for their manufacturing. That comes in as non-related party trade since Apple doesn't own a percent stake in Foxconn.

I'm not sure why you used two sources to explain one the 95% of related party trade. The NAICS Related-Party puts the trade deficit at 887.8 billion representing that related party trade accounts for about 78% of the trade deficit. The more telling factor from this is how globalization no longer creates US jobs. All the trade agreements we've set up to make American goods cheaper and to create a foundation for foreign policy has driven the American wage to a soon to be embarrassing level for the leader of the free world. Also, these statistics don't include support services like customer service, accounting, IT so the trade deficit is probably much higher. Eventually, we have to start thinking about not giving so much money for investors to sit on. We have to start thinking about what is happening to our consumer base so that investors actually have something to invest in. Maybe when the BRIC countries don't pan out we'll finally see some change.