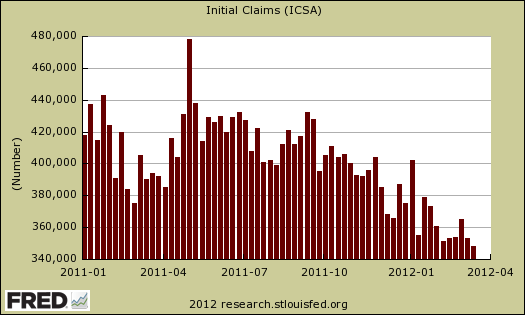 While initial unemployment claims are clearly dropping, they are still about 50,000 away from 2007 levels, or before the Great Recession officially started in December 2007.

Below is the 4 week moving average graphed, set to a logarithmic scale to remove even more statistical noise, for the last year. We have a clear downward trend, which is good news. The initial unemployment report is indicating moderate to modest job growth. Below is the mathematical log of initial weekly unemployment claims, so one can get a better sense of the rise and fall of the numbers. A log helps remove some statistical noise, it's kind of an averaging. As we can see we have a step rise during the height of the recession, but then a leveling where every week initial unemployment insurance claims hover around 400,000, refusing to really drop for over two years, a never ending labor malaise for most of the time after the recession ended in July 2009. Finally we're seeing a consistent decline.

Below is the 4 week moving average, set to a log scale, from April 1st, 2007. Here we can see we still are not at pre-recession initial weekly unemployment claims levels. Remember before the Great Recession the job market was still not so hot. Continuing unemployment claims dropped, but since we have large long term unemployed still, that number includes people running out of benefits.

In the week ending March 3rd, not seasonally adjusted, the raw number was 7,281,541 official people obtaining some sort of unemployment insurance benefit. Officially, there are 12.8 million unemployed and if one takes all of the people who want a job, including those stuck in part-time because they can't get anything else, that number is 27.3 million. Even at the February's job growth rate, it will take close to a decade to recover America's jobs.