Wall Street was all aghast that their quantitative easing was about to disappear.  The FOMC decided to taper in January and now stocks soar.  Why?  Because the taper is minimal and the FOMC announced the federal funds rate will remain an effective zero for much longer than previously estimated. 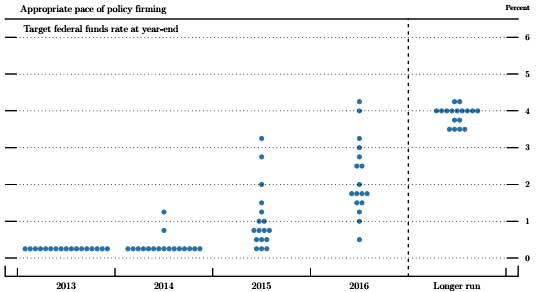 The FOMC also announced an unemployment rate figure, 6.5%, before they consider raise the Federal Funds rate from it's effective zero percent.  They also set a maximum annual inflation rate of 2.5%  These are threshold figures, not hard, written in stone rates.  There are many other economic metrics which can be horrific news, yet result in both low inflation and a low official unemployment rate.  Specifically Bernanke mentioned the labor participation rate being artificially low and the lack of job hires, as seen in the piss poor JOLTS statistics.. This gives a much wider timeline before the Fed would raise interest rates.  From Bernanke's opening statement at the press conference:

the Committee now anticipates it will likely be appropriate to maintain the current federal funds rate target well past the time that the unemployment rate declines to below 6-1/2 percent, especially if projected inflation continues to run below its 2 percent goal. In part this expectation reflects our assessment, based on a comprehensive set of indicators, that there will still be a substantial amount of slack in the labor market when the unemployment rate falls to 6-1/2 percent. This continuing job market slack imposes heavy costs on the unemployed and the underemployed and their families and reduces our nation’s productive capacity, warranting our ongoing highly accommodative policy. But, as the last phrase of the enhanced guidance underscores, the prospects for inflation provide another reason to keep policy accommodative. The Committee is determined to avoid inflation that is too low as well as inflation that is too high, and it anticipates keeping rates low at least until it sees inflation clearly moving back toward its 2 percent objective.

Bernanke also gave probably his last press conference.  Under employment and low inflation are one of the reasons the Fed is justifying continuing quantitative easing in spite of the slight reduction in asset purchases by $10 billion to a still massive $75 billion a month.  The FOMC recognized many people are not part of the labor force who could be as well as the large number of long-term unemployed.

The recovery clearly remains far from complete, with unemployment still elevated and with both underemployment and long-term unemployment still major concerns. We have also seen ongoing declines in labor force participation, which likely reflect not only longer-term influences such as the aging of the population but also discouragement on the part of potential workers.

Bernanke also emphasized data dependent analysis for the FOMC to take action.  Bernanke mentioned tight fiscal policy causing a drag on the economy over and over.  Yet Bernanke punted on much Q&A that could be headliners in the press.  It seems Bernanke is setting up a smooth transition for Janet Yellen to head the Fed, as she was all in on the FOMC decision and new Fed policy.

Generally speaking the Fed is clearly very stimulative and using the federal funds rate as an effective methadone program to get Wall Street off of their quantitative easing crack cocaine seems to be acceptable to markets.