It was neo-liberal policies that created this mess and it will take progressive policies to fix it. There are several reasons why we have not seen progressive policies from Democrats: 1) They are owned by Wall Street and 2) Such policies require a shared sacrifice (which has been absent for quite some time) or the financial oligarchy to experience some pain. We have seen nothing but policies that support the financial sector. That will have to change if we are to move forward.

Last week, Ben Bernanke blamed lax regulation for the financial crisis.  He was responding to those who claim low interest rate environment caused the crisis. Conservatives blame Fannie Mae and Freddie Mac.  These all were contributing factors and not the real cause of the crisis.  The depth of this crisis is too severe to blame one or several contributing factor.

Recently there has been several stories about 2000s being the Lost Decade of Jobs. No kidding. But what the stories fail to discuss is what are the reasons for the lack of job growth. Could it be because of economic policy? Heck, yeah - our current economic policy relies on wage suppression, cheap imports, more debt, abandonment of manufacturing sector (part of wage suppression strategy) and asset price inflation. But why don't we hear about this in the traditional media? 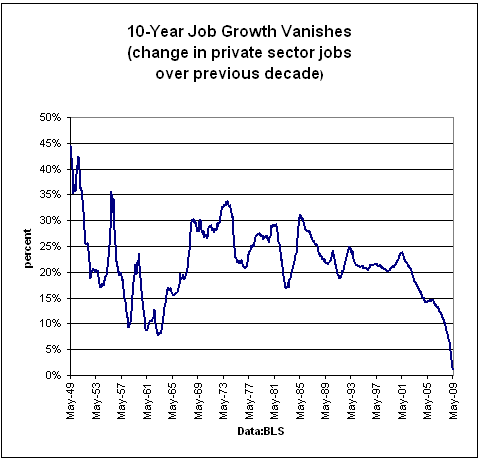 The race to the bottom. But this time the supporters of the ideology that is leading the race to the bottom are not hiding behind slogans such as "small government", "government is the problem" or "trickle down economics". No, no, they are coming right out in the open. For example this New York Times article: here.

The authors of this article don't waste any time. Check out the first paragraph:

American workers are overpaid, relative to equally productive employees elsewhere doing the same work. If the global economy is to get into balance, that gap must close.

But it gets better:

The big trade deficit is another sign of excessive pay for Americans. One explanation for the attractive prices of imported goods is that American workers are paid too much relative to their foreign peers.

This proposal is nothing new "new" but borrowed from Denmark.

Our mortgage finance system is broken.  It needs some serious restructuring or a complete overhaul.  We can learn a lot about a new structure from the Danes.  The Danish mortgage system is one of the oldest and most sophisticated housing finance markets in the world.

Increased Financialization in the U.S.

This is from a quote from Mervyn King, Governor of the Bank of England. Here is the full quote:

Needless, to say the financial conglomerates hate this idea and their friends in congress are out to kill it: