Unlike politically incorrect journalists in the mainstream media (including Fox News), one can't accurately report on bloody budget cuts — and then, just to appear non-partisan, say it's "Congress" who's proposing the cuts — not when it's the Republicans within Congress who are the ones proposing all these bloody budget cuts.

At his website Rep. Sam Johnson (R-Tex.), who introduced a bill last year to combat disability fraud, said "Not one dime should be lost to fraud, waste, or abuse."

But the Washington Post reports that fraud appears limited to relatively few cases in the disability program:

People are broke and hungry in America and the food stamp program has been the only thing between many and starvation.  Food stamps are successful, it has an incredibly low fraud rate and most importantly, America doesn't have starvation filling the streets as a result.  Yet for some reason House Republicans, with Majority leader Eric Cantor leading the charge, want to cut food stamps and force people to starve.

With the political convention rhetoric soaring and political ads about to carpet bomb the airwaves, we thought it might be useful to comparison/contrast the Democratic and Republican platforms and show for U.S. workers both have policy agendas which will damage the middle class. The Democratic platform is here and the Republican one, seemingly not even indexed by Google, is here, in large pdf form. Let's take economic and labor issues and compare them side by side.

The compromise "is a positive step toward reducing the future path of the deficit and the debt levels,” Steven Hess, senior credit officer at Moody’s in New York, said in a telephone interview yesterday. “We do think more needs to be done to ensure a reduction in the debt to GDP ratio, for example, going forward." Bloomberg, Aug 2 (Image: Okko Pyykko)

How many times have you read or heard about the magic numbers concerning the ratio of national debt to gross domestic product (GDP)? This was trotted out by both sides of the debt ceiling debate as a fact: if the debt-to-GDP ratio exceeds 90%, the results will be dire. Therefore, our current situation calls for a crisis reaction and extreme measures to get below the magic number. 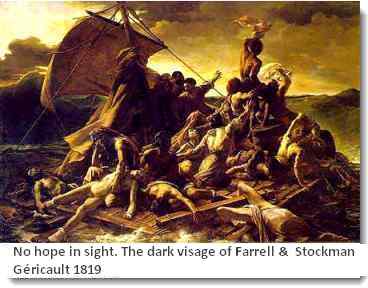