Greece is getting a bail out. Well, not really, because they are getting loans, oops, wait, yes really.

Either way, the IMF is way cheaper. It uses it’s own interest rate as a base, and it levies different surcharges. The fund’s rate works out to 2.71%, as of last week, for a €10 billion package.

But this thing isn't over.

The 30 billion euros from the EU “will not fully cover the Greek government’s financing needs for the next 12 months, let alone for 3 years, so Greece will still rely on commercial money beyond the April-May payments, and whether such money will become available will very depend on how credible the policy framework is and what investors think will happen beyond the program period,” he said. “Unfortunately, this thing is unlikely to go to bed any time soon.”

The bond spread blew up this past week. According to Calculated Risk the spread is now 463 bps. 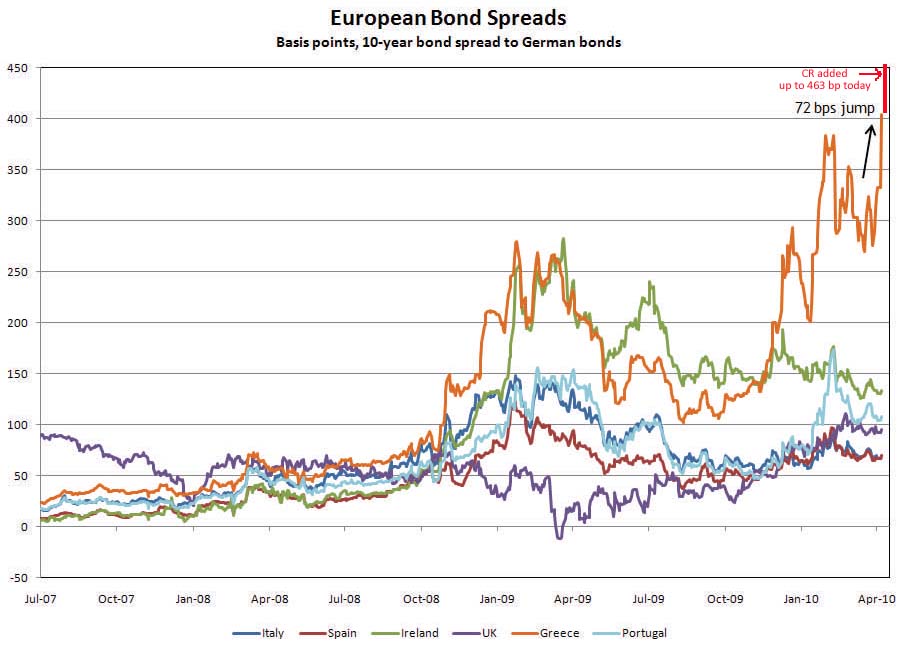 It appears all of this is to prevent a sovereign default in case Greece cannot finance it's own debt on commercial markets.

Reuters has the latest terms, which imply more bail out money is coming.

The EU/IMF aid to Greece will be significantly higher than 40 billion euros over the next three years if the mechanism is triggered, a senior finance ministry official said on Sunday.

"A logical amount for the three-year period would be significantly higher than 40 billion, but this has not yet been determined," the official said, correcting previous comments.

The official had previously said that it would be logical for the mechanism to amount to some 80 billion euros ($107 billion) over the next three years.

So, these loans are waiting in the wings, just in case. What does this mean for the United States? It's more of a model for trying to stop currency speculation as well as what happens when one has too much sovereign debt.

Banks that own Greek bonds to exchange their assets for cheap central bank funds.

So, we have a non-bail out bail out, through lower interest rates and then an additional exchange to get out of Greece bonds. No default, no restructuring and no printing paper money so far.

END_OF_DOCUMENT_TOKEN_TO_BE_REPLACED

Long-Term Unemployed Baby Boomers in 2013 - 153361 reads
EXPLOITATION, INC.: David Rockefeller and Adventures in Global Finance - 85695 reads
Obama Picks Cheap Labor & Guest Worker Queen Janet Napolitano for DHS! - 73999 reads
Massachusetts turned Red, but that color isn't what you think it is - 33874 reads
The Boys Club of Tech Perpetuated by Foreign Worker Visas - 62072 reads
Libya, Gas Prices, and the Big Payday at Your Expense - 52556 reads
The Great U.S. Worker Sell Out Through Comprehensive Immigration Reform - 63059 reads
Too Many People - Too Little Work - 27829 reads
Scientist Who Laid Ground Work for Nobel Prize Drives a Bus, Can't get a Job - 63112 reads
Brain Dead Friedman Dutifully Writes Propaganda for His Corporate Lobbyist Masters - 59663 reads
Will the NY Attorney General Bring Doomsday Charges Against Wall Street? If So, How Long Will He Survive? - 1189174 reads
New York Post Claims Census Falsifies Unemployment Figures - 911143 reads
Safeway Skewered for Throwing 6,000 Workers Under the Bus in Video Parody - 406877 reads
How Many Jobs Are Needed to Keep Up with Population Growth? - 308139 reads
VAT or Value Added Tax is Getting a Look in D.C. - 302607 reads
U3 and U6 Unemployment during the Great Depression - 285915 reads
House discusses 401k/IRA confiscation - 275288 reads
Tax Cuts for the Rich Do Not Generate Jobs - 264453 reads
The war on the middle class - 261760 reads
Delusions of Normalcy 2011 - Dismal Scientists Cheer Up - 252062 reads
.