First, the average length of unemployment is still very high, 39.1 weeks, even while dropping 0.3 percentage points from last month. People unemployed for 27 weeks or more is now 41.3% of the total unemployed, or 5,101,000 million and a seasonally adjusted drop of -207,000 from last month. This percentage has barely budged as a percentage of total unemployed in comparison to pre-recession and historical levels. The above drop in long term unemployed by -207,000 appears to imply these people just dropped off of the count. Those not counted, or people in the civilian, non-instutionalized, adult population who are considered not in the labor force, increased by over half a million in a month, or 522,000, to stand at 88,419,000. The civilian non-institutional population is currently 242,784,000. Below is the monthly change of those considered not in the labor force. This is a statistically noisy figure on a month to month basis and that super large spike in January 2012 are the 2010 Census adjustments. See this post for details on those adjustments and this one for affects and data continuity. Some people are in part-time jobs because they want to be, others because they cannot find anything else. Some are stuck in part-time because their hours were cut by their employer. These part-timers due to slack work now number 5,187,000, an uptick of 106,000 from March.

Below is a graph of forced part-time because they got their hours cut as a percentage of the total employed. If you want to see a recession economic indicator, this looks like a pretty damn strong one. See how closely the percentage increase matches recessions, the gray bars? The percentage of people in part-time jobs due to slack economic conditions has stayed extremely high since the start of the Great Recession, even while declining. An uptick of any size is simply something we do not want to see. U-6 is a broader measure of unemployment, includes the official unemployed, people stuck in part-time jobs and a subgroup not counted in the labor force but are available for work and looked in the last 12 months. U-6 has also remained consistently high. In February U-6 was 14.5%, the same as March's U-6 alternative unemployment rate. The real number of people wanting a job for April is 26.72 million, over double the official counted as unemployed of 12.5 million. One needs to add up the official unemployed, people stuck in part-time who need full-time jobs, and all of those people not in the labor force, but who report they actually want a job, currently at 6.366 million. 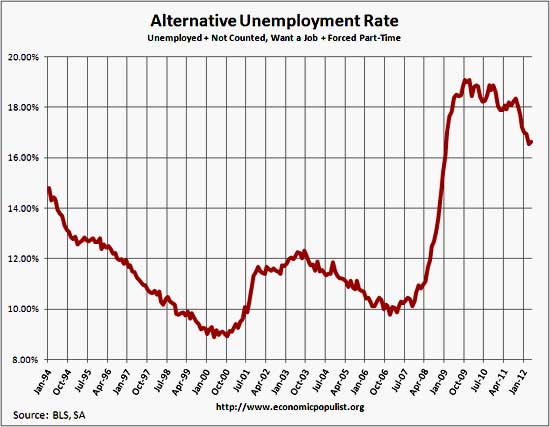 Another indicator things are not so rosy is the number of discouraged workers remains highly elevated. Discouraged workers are people, not counted as part of the civilian labor force, who not only want a job, but also looked for one in the last year. These people aren't job hunting now because they believe there are no jobs out there. Below is the graph of discouraged workers, currently at 0.968 million. A final area of contention is figuring out how many jobs are needed each month to keep up with population growth. Seems many in the press just throw out a number. We just don't know due to civilian non-institutional population fluctuation. We do know that overall population monthly growth has been hovering around 200,000 a month, this month the change was 180,000. We also know the civilian non-institutional population is roughly 75% of the total population. We also know the labor participation rates and employment to population ratios are artificially low. Therefore, it's safe to say we need about 100,000 jobs per month to keep up with population growth at these same record low labor participation rates. The Atlanta Fed got sick of the debate it seems and put up a monthly jobs calculator. Appears 100,000 is right on the money for the monthly jobs needed to keep up with population growth, 101,169 in fact. We've checked the Atlanta Fed's job calculator, it is correct, using the same methods we have done on this site, by hand.