The headlines blare Obamcare will cause over two million more jobs to be lost by 2017 and the losses will grow to 2.5 million jobs by 2024.  That analysis is from the Congressional Budget Office in their 2014 Budget Outlook report.  Unfortunately, the rationale behind the CBO claims are that the subsidies to buy health insurance for individuals are larger than the wages earned working full-time hours.  From the report:

The reduction in CBO’s projections of hours worked represents a decline in the number of full-time-equivalent workers of about 2.0 million in 2017, rising to about 2.5 million in 2024. Although CBO projects that total employment (and compensation) will increase over the coming decade, that increase will be smaller than it would have been in the absence of the ACA. The decline in fulltime-equivalent employment stemming from the ACA will consist of some people not being employed at all and other people working fewer hours.

The problem with the CBO analysis is worker behavior is most influenced by actual wages than anything else.  The CBO report has many assumptions yet little statistical data and even calculations.  For example, the report states someone at 150% of the federal poverty line will pay 4% of their income on health insurance while someone at 200% of the federal poverty line will pay 6.2% of their income due to reduction in the Obamacare subsidy.  For an individual using 2013's federal poverty $11,490 level, 150% of that would be an annual income of $17,235 and 200% above the poverty threshold would be $22,980.  A person earning two times the federal poverty level and would pay $1,447.74 per year for health insurance whereas a person earning $17,235 would pay $609.4 for the same policy.  Continuing on with the CBO example, this is a price difference due to the Obamcare health insurance subsidy change of $758.34.  Yet, if one notices, the income difference is $5745.  In other words, it would be income and wages still dominating a person choice, if they have one, to earn two times the federal poverty level vs. lowering their hours or job function to earn 1.5 times the federal poverty level,  $5745 is much greater than $758.34.  The subsidy difference does not exceed the income, or come close and considering how low these annual income amounts are, every dollar counts, in spite of paying more for health insurance.  This is just one exercise to show the problems with the CBO assumptions.  Another huge one is exchange policies are still terrible health insurance policies whereas employer group health insurance is vastly different and almost always provides superior benefits.  Finally, everyone in America knows one cannot make rent in many places earning only $17,235 a year.  Think about it, the average rent nationally is $1,231 a month, or $14,772 a year.  Does anyone honestly believe people will give up $5745.00 to gain $758.34?

Despite the unfortunate claims of Obamacare costing jobs that are really impossible to prove at this point, there were actually important results of the CBO report and they are not good news.  The CBO has projected real economic growth will be below it's potential until year 2017 and as one can see in the below graph, that's an astounding long stretch of time.  After that the CBO expects real GDP to grow at the rate of potential GDP, but of course that is relative since the United States manufacturing now has stunted capacity.  Long term, the CBO projects GDP will be below it's potential all the way until 2024.  Economic growth is expected to be stronger for years 2014 to 2017, yet there is still economic slack and weak demand.  For 2014 through 2017 they expect GDP to increase by 3.1%, yet after that they expect sluggish growth of 2.5%. 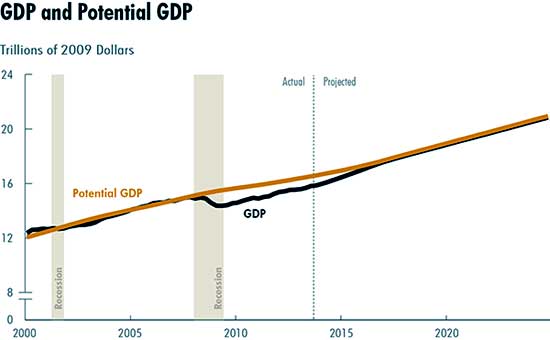 The shoddy economy is projected to have cost the U.S. over six million jobs and the CBO's estimate is probably low..  Worse, the CBO blames the aging population instead of the many policies in the United States stunting the economy.  America's labor force is simply not the problem, especially due to people being fully functioning into their 70's these days and and even longer.  This is the great job killer, the economy and the politicians who stunt it.  It is not Obamacare, it is the lack of U.S. manufacturing, investment, infrastructure, the never ending bad trade deals and a myriad of other policies and laws which put the U.S. worker and middle class last in any equation.

There is much more to the CBO report, yet at minimum, the focus on Obamacare is premature.  Clearly Obamcare has many problems and flaws, yet there are some good things, especially the expansion of Medicaid coverage.  The CBO does recognize allowing Medicaid coverage for people earning 138% above the federal poverty level does allow them to increase their income without losing coverage.  Yet again the CBO does not seem to recognize that the policies on the exchanges are vastly inferior to government run health care insurance and this might be the real reason behind incentives to reduce own's income to obtain Medicaid, depending on one's health needs.

It is well known that, twenty four states with Republican governors rejected free money from the Federal Government to expand Medicaid.  The result of this is millions are still without any insurance and some are literally dying because of it.  Whatever one thinks about the private insurance part of Obamacare, Medicaid is a government run system and expanding it to cover more people is a good thing.  For some reason adults without children are thrown to the wolves in this country when they need help and adults without children in 23 of the 24 states who did not accept federal funding to expand Medicaid, cannot obtain it, even though they are financially destitute.  Only Wisconsin finally allowed poverty stricken adults without children be covered by Medicaid.  Below is a map of the states where Medicaid was not expanded in 2014. 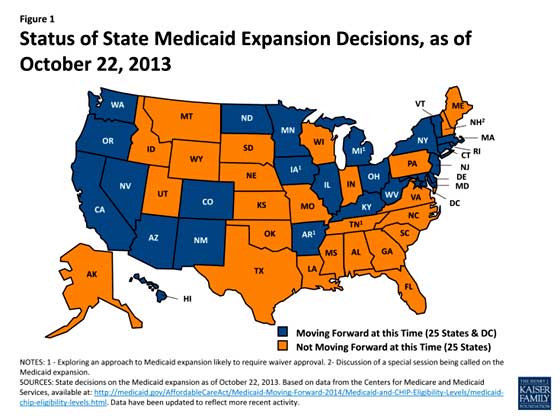 While many are focused on the CBO's claim that hours worked would be reduced by 1.5% to 2.0% by claiming Obamacare will reduce the incentives to work, we could not find any counter estimate on the fact when people have health insurance and can afford health care, they are more healthy to work in the first place.  In 2012 the Integrated Benefits Institute found America's poor health cost the economy $576 billion annually.  That's a lot of dough and it is intuitively obvious having health insurance for more people will reduce those costs.  If a person cannot get health insurance and get their medical conditions addressed, this means they cannot work.  There are millions of people in this category.  Untreated blood pressure, kidney problems, diabetes, pick a condition, would devastate a person to the point they were so ill they could not hold down a job in the first place.  Bottom line the CBO is supposed to be non-partisan, yet wading into Obamacare projections to this degree seems highly politically suspect.  Worse, the report took the focus off the real hair raising figures of an economy operating below it's potential for years to come.

"CBO estimates that the ACA will reduce the total number of hours worked, on net, by about 1.5 percent to 2.0 percent during the period from 2017 to 2024, almost entirely because workers will choose to supply less labor—given the new taxes and other incentives they will face and the financial benefits some will receive."

do we have evidence of the poor remaining poor and refusing to take a job so they could remain eligible for Medicaid? unless we’ve seen that, it’s hard to imagine anyone making that choice to keep their subsides for an ACA health care plan…

furthermore, just because a percentage of workers might decide to work less hours does not mean that hours worked in the aggregate will fall…if someone quits their extra job, whoever they had been working for will just hire someone else…the only way ACA could cause a reduction in hours would be if there were a labor shortage…if that's what they’re forecasting, we should welcome it, as it would raise wages..

dont put too much stake in such pronouncements from the CBO...Elmendorf has long had a bone to pick with welfare programs..

From Economist Jared Bernstein: There’s a difference between workers (labor supply) and jobs (labor demand). The budget office bent over backward to make this distinction, claiming that employers’ demands for workers will not change much at all because of the health care law... There is thus no support in the Congressional Budget Office report for the claim that the health care act kills jobs. As the report put it, the estimated reduction in hours of work “stems almost entirely from a net decline in the amount of labor that workers choose to supply, rather than from a net drop in businesses’ demand for labor.”

From the New York Times editorial board: Republicans immediately tried to brand the findings as “devastating” and stark evidence of President Obama’s health care reform as a failure and a job killer. It is no such thing. ... The report clearly stated that health reform would not produce an increase in unemployment (workers unable to find jobs) or underemployment (part-time workers who would prefer to work more hours per week). It also found “no compelling evidence” that, as of now, part-time employment has increased as a result of the reform law, a frequent claim of critics.

From the Washington Post: "Some people might decide to work part-time, not full time, in order to keep getting health-care subsidies. Thus, they are reducing their supply of labor to the market. Other people near retirement age might decide they no longer need to hold onto their job just because it provides health insurance, and they also leave the work force." (Scroll down to "The Facts" in the Washington Post article.)

Paul Krugman notes (that because with so many currently unemployed), "Reduced work by some will open up job opportunities for others."

So Krugman's point is right, with weak demand for labor and labor oversupply for available jobs, there is no doubt others will take up the slack.

But our argument is the assumptions themselves, that people would not take work for more income due to ACA are in strong doubt.

Krugman is not thinking, he's reacting to posts from the right...or he's thinking like an economist, where workers reactions marginal tax rates are assumed...i'd bet the average worker wont even consider the effects on his ACA subsidy when making a job choice...

say a guy is working 35 hours a week at a $15 / hour job, kids want to go to college, wife works part time at $12 / hour to make ends meet...boss comes to him and says we have more work for you, start working an extra hour a day...can you imagine someone telling the boss cant do that, my ACA subsidy would be lower? can you even imagine the typical worker even having that thought process? i cant even imagiine myself working through all that when making such a decision..

as a follow up article, that is an excellent idea to research the statistics and patterns of social services benefits as a behavior pattern when one is capable, able to work and work is actually available. We do have plenty of data to number crunch.

yet the pols, on both sides, continue to point to the CBO as the non-partisan info god on which all should rely...when it's convenient, of course. and you wonder why no one believes anyone else's numbers.

these annual reports & forecasts are mandated by congress and in their hubris they believe their own propaganda...once a year they're treated as gospel, and quoted the remainder of the year till the next report. for a random check: here's the 2010 report:
http://www.cbo.gov/sites/default/files/cbofiles/ftpdocs/108xx/doc10871/0... (182 pages) how did their forecasts 4 years ago work out? they forecast GDP growing at a 4.4% rate over the 2012 to 2014 period...