Senator Elizabeth Warren appeared on CNBC's "Squawk Box" last Friday to discuss her proposed update of the Glass-Steagall Act and the big banks --- but the station's hosts didn't appear to be willing participants --- they almost sounded hostile.

The interview was later posted at Elizabeth Warren's YouTube channel and the website Upworthy.Com helped make the video go viral. Then CNBC filed a copyright complaint against
Warren --- and the video was since removed from her YouTube channel. (What didn't CNBC want the general public to see?)

Warren co-sponsored a bill with Senators John McCain (R-Ariz.), Maria Cantwell (D-Wash.) and Angus King (I-Maine).
The bill is aimed at reining in risk at the nation's biggest banks by separating traditional banks that offer checking and savings accounts insured by the FDIC from riskier financial institutions. The latter category includes companies such as Goldman Sachs, AIG and others that are involved in investment banking, insurance, credit default swaps (derivatives), hedge funds and private equity.

The bill would essentially roll back the 1999 Gramm-Leach-Bliley Act, the bill that Republican Senator Phil Gramm helped introduce, and that President Bill Clinton signed into law. Warren's bill would reinstate provisions of the Glass-Steagall Act. (Three years later Senator Gramm went to work for the banking giant USB).

CNBC has posted the video of Warren's interview on their web site, but when informed that their embed system didn't work on mobile devices and tended to break sites, they uploaded the clip to their own YouTube channel. (Further below is the embedded video.)

CNBC host Joe Kernen opened the discussion by asking Elizabeth Warren the silly question of how she'd like to be addressed --- as Professor or as Senator --- reminding us of the Massachusetts Senatorial debate between Warren and Scott Brown.

Joe Kernen was dismissive of Warren's short history on U.S. banking, saying it was all " apples and oranges."

Amanda Drury said that according to every report she's ever read, and everyone she's ever spoken to, that there's "a very, very, very slim chance" of Warren's bill ever passing. Warren responded: "Well let me put it this way, if you don't fight for it, the chances are zero."

Brian Sullivan asked Warren, "Shouldn't we just tell the American consumer that no matter what we do, there will be bank boom and bust cycles, no matter what the laws and regulations" --- but then he later says, "I didn't say regulation never worked." 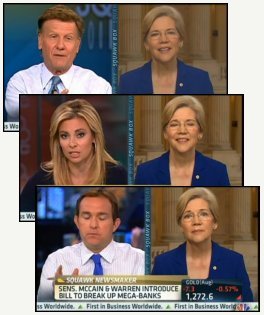 I also have a copy of the video in case YouTube pulls it down again. But personally, I really don't see the big deal. By now we're all very aware of the banks nefarious dealings and of Senator Warren's attempts to correct these abuses. But why would a media outlet like CNBC (whose parent company is the tax dodger evader avoider GE) complain? Is it because CNBC is working on behalf of the big financial institutions? Could it be because a host of big banks and private equity firms owns GE stock --- and just wants to control the public message? Or maybe it's because an advertiser on CNBC's website (ING, a Dutch bank) objected to the content of the video.

UpWorthy says this raises a larger question: Aren't U.S. Congressional Senators allowed to share clips of themselves on TV? What provoked CNBC (via YouTube) to pull this specific video down in the first place? UpWorthy also sent CNBC a list of other Senator's interviews that were also posted on YouTube, but without any of CNBC's copyright objections.

Check out these recent headlines from the Wall Street Journal:

But the banks don't think they are earning enough as it is, so they are also spending millions lobbying to weaken Dodd-Frank:

Bloomberg Law did an in depth piece on how the Banking lobby is stopping New Glass-Steagall.

"Let me issue and control a nation's money and I care not who makes its laws." ~ Rothschild

Whether or not he said that, it must be true --- just ask Eric Holder. He'll tell you that the bankers are too big to jail. They all tell us the same thing: "It will hurt the economy". But whose economy are they referring to?

On today's front page of some paper they were talking about banksters and shuffling aluminum between warehouses to reap profits (not for anything productive, just the BS $ shuffling games these assclowns play). GS and others were called out by ZH a long time ago for these games involving oil, silver, aluminum, etc. Coke called out the banksters for these price fixing games because they were so reliant on aluminum for basically all their business and in the end we pay for higher airplane manufacturing costs, higher Coke costs, etc. I mentioned this too here a long time ago.
I even believe some of the warehouses were in Detroit. Guess that didn't really help the people of Detroit though, kind of like sitting right next to Canada and NAFTA didn't really help Detroit out either, which pro-globalists never really address ever.

Nope, the media ignored it all. ZH didn't. The media ignored oil being held in tankers to limit supply until someone acted too out of control and had to be prosecuted. They ignore embezzlement and aiding it (Dimon, Corzine, etc.), price fixing in commodities, QE's real effects, real inflation and real unemployment rates (shadowstats and others speak truth), derivatives in the trillions that mean nothing of value but will destroy us yet again. And on, and on, and on.

It's great and sad. Great because ZH, this site, and many others reveal the truth and through the comments and posts, show the writers and audience know what's going on long, long, long before the powers that be and corrupt fools in boardrooms, politics, and media can understand or acknowledge anything. It's tragic because it shows we know long, long, long before things fully explode what's coming - but we're locked out and can't do anything. We're just in the bowels of the Titanic.

That's quite a gotcha story if they found the secret stash. In 2008 they found a bunch of oil tankers just parked out at sea when prices were soaring.

http://www.reuters.com/article/2011/07/29/us-lme-warehousing-idUSTRE76R3...
http://www.zerohedge.com/article/goldman-jpm-have-now-become-commodity-c...
http://www.nytimes.com/2013/07/21/business/a-shuffle-of-aluminum-but-to-...
And for those that think it's "just aluminum" and "aluminum only matters to beverage drinkers," good luck with that thinking. Alcoa might disagree with that gross underestimation of aluminum's importance in the modern world. That's like saying petroleum only matters to people that drive cars. Yeah, because that's the only thing petroleum is used for/sarc.

Also, thought Teddy R. and Clayton and Sherman Antitrust Acts would end this crap, guess not. DOJ and FTC and everyone else apparently bought-and-paid for sitting on sidelines doing jacksh*t when this is out there and obvious. Criminal and Civil Divisions and 93 US Attorneys Offices getting paid for nothing yet again. Oil, copper, gold, silver, aluminum, real estate, etc. all being played with by people making money through corruption and crime - CAPITALISM? Yeah, whatever. It's a criminal syndicate running our country and big business and it's global.

If you aren't in "elected corrupt office" or in a boardroom, you are like the rest of us, small farmers and small rig owners and hourly workers of old trying to get by while the Vanderbilts and Rockefellers and Carnegies try to crush us or make billions more by denying us a single penny.

CNBC=Constant Nose to Butt Caressing of everything Wall Street. Always has, always will.