Europe is in trouble again.


Irish and Portuguese government bonds fell, pushing the yields on 10-year securities to records versus benchmark German bunds, on concern European banks are vulnerable to losses on their holdings of so-called peripheral euro-region debt. 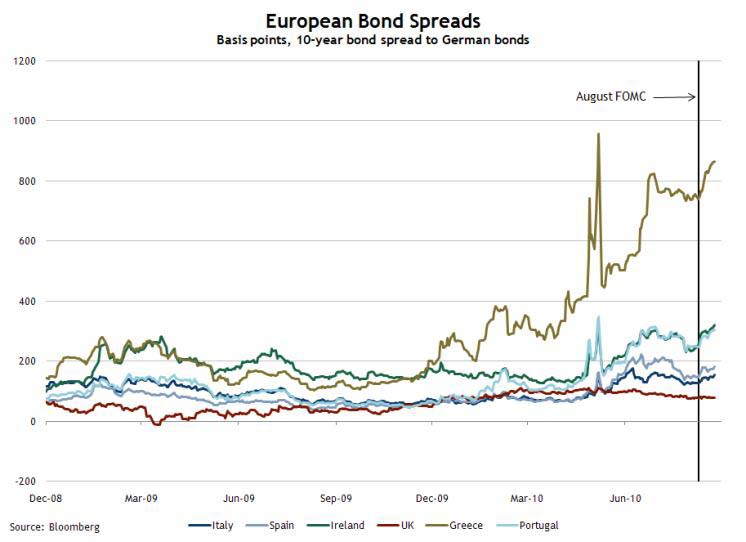 Spain's debt isn't doing much better.
This is particularly depressing for Ireland since it has already enacted the draconian austerity measures that the financial markets demanded. In fact, all of the European nations in question have implemented austerity measures, and yet the financial markets continue to punish them.
Ireland and Portugal are the big losers for today, but Greece is still leading the pack towards self-destruction.


“Greece is insolvent,” Bosomworth, Munich-based head of portfolio management at Pimco, which oversees the world’s largest bond fund, said in a telephone interview today. “I see it as being quite a substantial risk that Greece eventually defaults or restructures.”

One Trillion dollars in bailouts and we are back where we started four months ago. Why is that?
The answer is surprisingly simple.

Let's start with Ireland.
Eire's problems started on September 20, 2008, when the Irish Parliament decided to bail out the nation's largest bank - Anglo Irish. The problems with Irish debt today was directly related to this bailout.


Struggling with the euro zone's biggest budget deficit relative to its gross domestic product at more than 14% last year, Irish authorities are also grappling with the ballooning cost of bailing out the banks, especially state-owned Anglo Irish—a bill that has already hit €33 billion ($42.55 billion), or roughly 20% of Ireland's GDP.

The math for this is far too simple - if it wasn't for the government's bailout of this bank Ireland's budget would be in surplus. Yet the austerity measures are aimed at causing pain for the productive part of the economy - the working class.

There are a couple lessons to be learned from this:
Lesson #1) It pays to stand up for yourself.
At present time, Greece is paying less interest on its debt and imposing fewer austerity measures on its people than Ireland. The difference? The Greek people rioted and the Irish didn't.

Lesson #2) Bailouts and stimulus are not substitutions for real reform.
If the costs of the crisis fell onto the shoulders of the people who profited from the bubble, then we would see real reforms. If no one responsible pays, and the costs are socialized, then nothing gets accomplished.

The great Bankster giveaway of course would come back on itself, as is everything else.

I read over the holiday a few now calling to let the residential market implode and self-correct. Well, isn't that all nice now that billions have been wasted and even worse, the bail outs did not go to homeowners?

Of course parasitic speculators would introduce volatility as it increases profits and commissions and the expense of real economy. It is also a battle between national sovereignty and the implementation of a global financial system.

Through all this the only country with the cohones to stand up to the banks and stick to their guns has been Iceland.

I don't know how the financial markets can demand anything, austerity included. They react to what's happening. The markets react particularly negatively to uncertainty and fraud, which is why the interest rates on Greek bonds are so high. But I would argue that the steady grind higher of interest rates on sovereign bonds from the PIIGS countries as well as in the periphery (e.g. Latvia) is a logical market reaction to austerity measures; they don't work. In the real world austerity crushes people and economies while preserving only oligarch wealth.

Austerity only functions in the ivory tower models of economists who don't believe that their models need to have predictive real value. Mankiw comes to mind. How many economies does the IMF need to crush before the idiots who run the joint are shown the door? By most historical measures (BTW, this is excellent, well-referenced reading material) and in real world models of economic activity, austerity is a predictable failure.

I'm rooting for Iceland, but all the available evidence suggests that they will be dragged down with everyone else. The new political motif seems to be "The International Courts forced us to do it!". They're not quite there yet, but that's clearly being telegraphed by the new Icelandic government. Nevertheless, Iceland has a significant advantage that the PIIGS countries do not. They have their own currency and that's very, very valuable.