Total February retail sales were $447.3 billion.  Below are the retail sales categories monthly percentage changes.  These numbers are seasonally adjusted.   General Merchandise includes Walmart, super centers, Costco and so on.  Department stores by themselves saw no change from last month, not good news for them during the start of Holiday shopping.  Grocery stores by themselves showed a -0.3% monthly sales decrease.  Building materials and garden supply places had a great month with a 1.6% monthly gain.  Sporting goods also had a good month with a 1.2% increase and are up 6.7% for the year.  Restaurants and bars also had a good showing with a 1.0% increase and are up 6.4% for the year.  Miscellaneous brick and mortar store retailers had a miserable month with a -1.1% decline in sales.  Departments stores, part of the general merchandise category, declined by -0.4%.  Online shopping actually declined by -0.2% for the month, but is up 6.3% for the year. 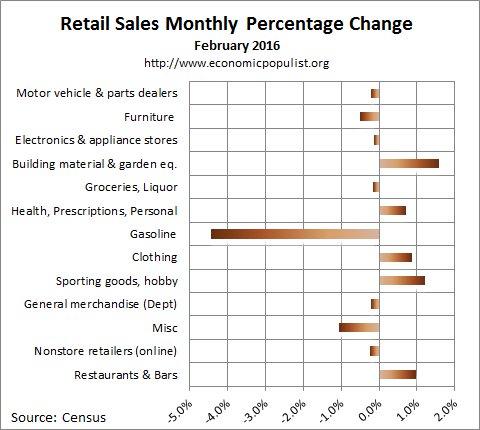 Below is a graph of just auto sales.  For the year, motor vehicle sales have increased 7.1%.  Autos & parts together have increased 6.8% from a year ago. Below are the retail sales categories by dollar amounts.   As we can see, autos are by far the largest amount of retail sales.  Yes folks, in spite of the great smartphone revolution, the automobile remains king. 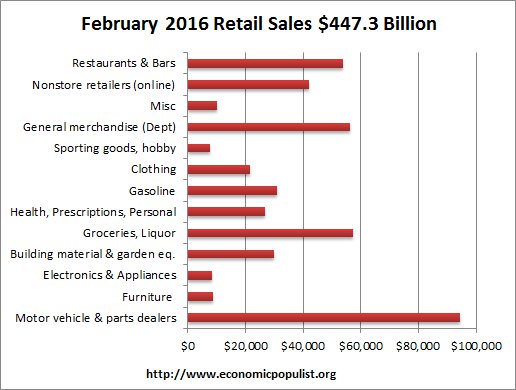 Graphed below are weekly regular gasoline prices, which is strongly correlated to retail sales figures. The below pie chart breaks down the monthly seasonally adjusted retail sales by category as a percentage of total sales by dollar amounts. 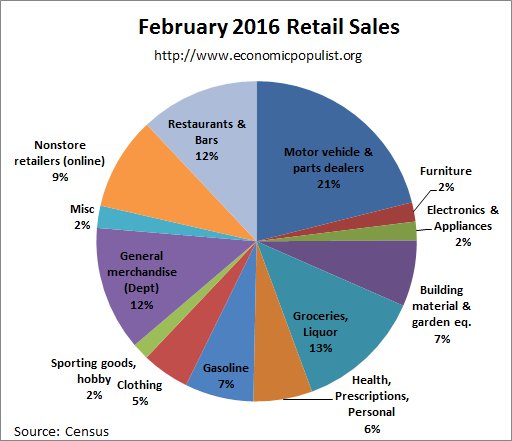 Retail sales correlates to personal consumption, which in turn is about 70% of GDP growth.  Yet GDP has inflation removed from it's numbers.  This is why Wall Street jumps on these retail sales figures.  Below is the graph of retail sales in real dollars, or adjusted for inflation, so one gets a sense of volume versus price increases.  Below is the annualized monthly percentage change in real retail sales, monthly, up to January 2016.  This is a crude estimate since CPI is used instead of individual category inflation indexes. For the three month moving average, from February to December in comparison to the September to November average, retail sales have increased by 02%, which implies continuing slow molasses sales.  The retail sales three month moving average in comparison to a year ago is up a much better 2.9%.  Overall as shown the below graph of quarterly annualized retail sales percentage change, up to Q4 2015.  Adjusted for prices and inflation is what matters for economic growth.