One might think that $11 dollars less per month in food stamps for an individual is not a big deal.  But considering the maximum monthly amount one could have is $200 a month, now $189, it is.  A whopping 15% of the population are on food stamps and now will experience a 5.4% cut in benefits, just in time for the holidays.  As of July 2013, 47,637,407 people were receiving SNAP benefits.  That is one out of 6.6 people in the United States who need food stamps to survive. 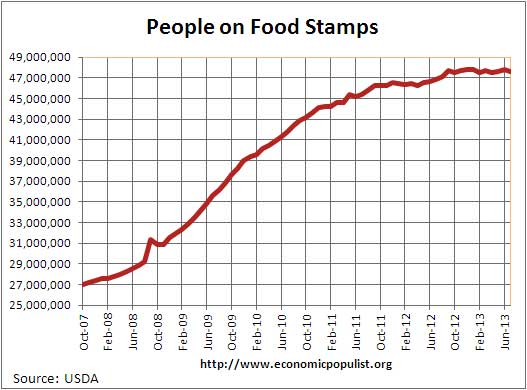 As Economist Chinn points out this is a fairly steep cut.  For a family of three receiving maximum benefits, it equates to losing 16 meals a month, a family of four loses 21 meals and this is assuming they can eat on $1.70 a day.  The food stamp cuts mean benefits will average less than $1.40 per meal per person according to the CBPP.  Anyone try to make a meal for $1.40 that is nutritious with all of the food groups?  One small Apple costs 50¢ and one green pepper costs at least 60¢.  In other words, anyone aware of prices knows a good meal cannot be had for $1.40.  The cuts reduce food stamp spending by $5 billion in fiscal year 2014 and these cuts continue to a total of $16 billion by the end of fiscal year 2016.  This means in 2014, a family of four will experience a 5.4% drop in food stamp benefits.  This is dramatic when food stamps do not cover enough food for the month already.

Chinn shows how dramatic the cuts are when accounting for inflation.  Below is his graph showing the sudden decline by showing the inflation adjusted monthly food stamp expenditures for fiscal year 2010 up to July 2013, in blue, against the CBO projected food stamp expenditures for with the cuts, in red.  Chinn assumed a 1.7% annual inflation rate, which is actually low.  In other words if inflation goes to 2.0% as projected, the cuts in terms of real buying power are even more draconian.  As we can see in Chinn's graph, the cliff dive cuts will not just impact millions of people in the United States needing to eat, but the overall economy as well. 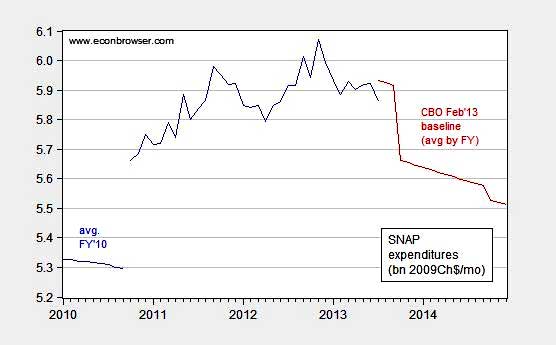 Personal consumption expenditures, are expected to be reduced by 0.2 percentage points in Q4 and personal consumption is about 70% of GDP.  Overall the impact is projected to shave 0.1 percentage point off of GDP by the SNAP reduction alone.  Q4 GDP is already projected to be low, around 2.0%.  For every food stamp dollar spent, one adds $1.50 back into the economy, so food stamps also have a stimulative effect on economic growth.  Moody's estimates the impact even higher, for every dollar spent with food stamps real GDP increased by $1.73.

The situation gets worse as Republicans try to deny benefits to adults generally along with draconian cuts to food stamps, a whopping $40 billion worth.  The Senate has already agreed to another $4.1 billion.  We can see from the statistics this is a really cruel as well as economically and fiscally ineffective attack on the poor.  Meanwhile the revenue draining tax cuts for the rich and corporations remain in place, increasing income inequality as well as deficits.  Subsidies for large corporations will not be touched either.  It is only the most vulnerable and needy in our society that are under continual attack by the government.

The Wall Street Journal's food stamp map by state is shown below.  Notice how in many red states the people are highly dependent upon food stamps to survive.  Yet their very government representatives vote to deny their own constituents funds to stop their hunger. 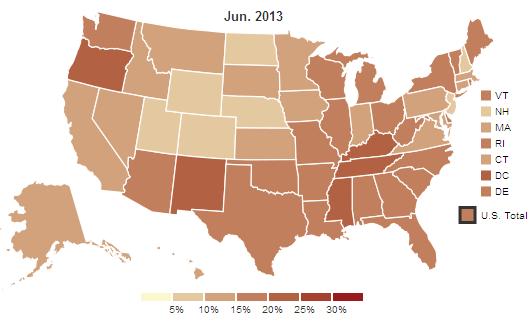 The change will leave 48 million Americans with an estimated $16 billion less to spend over the next three years and comes just months after the expiration of a payroll tax cut knocked 2% off consumers' monthly paychecks.

WSJ is also reporting grocery stores are bracing for the negative impact the cuts will have on their sales.  Walmart alone receives 18% of the SNAP benefits allocated.  This implies the food stamp cuts will reduce Walmart sales dramatically.

On the business side of the equation, the cuts will fall particularly hard on the grocers, discounters, dollar stores and gas stations that depend heavily on low-income shoppers. Weak spending in that stressed consumer segment has already led retailers including Wal-Mart Stores Inc. and Target Corp to lower their sales forecasts for the rest of the year ahead of holidays.

Kroger Co. told investors the Cincinnati-based grocer is bracing for an impact from the benefit cuts. If necessary, the chain is prepared to lower the cost of some foods at the expense of margins to boost sales,

Wal-Mart estimates it rakes in about 18% of total U.S. outlays on food stamps. That would mean it pulled in $14 billion of the $80 billion the USDA says was appropriated for food stamps in the year ended in September 2012.

All of this is just in time for the holidays as well.  November is the biggest grocery month with Thanksgiving dinner costing upon average $50 .  That is quite a cost out of food stamp benefits for one meal and leftovers.  Merry Christmas everyone, the government is serving up austerity this year, with more gifts like this to come.