Consider the irony of companies like Walmart that economically forces their employees to apply for food stamps, and then profits from their food stamp dollars. That's not more public welfare, that's more corporate welfare. But now those profits are at risk, because the GOP's current version of a farm bill includes ZERO for food stamps --- meaning, 1 in 6 Americans could also go hungry. 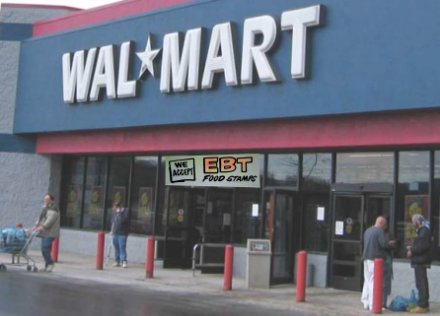 Not to mention the millions of Americans who are either:

So it's no wonder that even the discount stores' revenues have been suffering in this economy. Howard Levine, chairman and chief executive of discount retailer Family Dollar Stores, said in an interview with the Wall Street Journal, "This year is proving to be more challenging than we had originally planned," he told investors earlier this month. "The consumer is just more challenged than we had anticipated."

The Family Dollar Stores are challenged because the consumers are challenged. What did America's CEOs expect? If people don't have the money to spend (because they need food), without a discretionary income --- without "demand" for products and services --- who needs a "supply"? It's not as if, "If we build it, they will come." Many of those people don't even have any way of getting there.

Walmart recently gathered a few headlines when it threatened to cancel construction on three stores in Washington D.C. after the city council wanted to force them to pay a living wage of $12.50 an hour --- although earlier this year, Walmart claimed in a letter to Ralph Nader that $12.67 an hour was already the average wage they paid their employees.

A McDonald's worker would have to work 550 years to earn the CEO's pay. Recently in the New York Times:

"Wage trends in fast food are not simply a result of impersonal market forces. Corporate policy matters. According to Bloomberg News, the disparity between the pay of McDonald’s fast-food workers and its chief executive officer has doubled in the last 10 years, while the company lobbied against minimum wage increases and discouraged unionization. According to a recent Gallup Poll, more than two-thirds of Americans support an increase in the minimum wage, and some restaurant owners are also on board."

The Politics of Food Stamps

Paul Krugman recent wrote a very informative article about the food stamp program titled From the Mouths of Babes, where he says that the GOP's plan for SNAP is "first, shrink it; then, effectively kill it."

From The Hill, regarding the current version of the farm bill:

"House Agriculture Committee Chairman Frank Lucas (R-Okla.) warned Friday that no one should expect action anytime soon given fights among House Republicans over how much to cut food stamps. Rep. Steve King (R-Iowa), who serves on the 20-odd member working group, said there is 50-50 chance there will be no draft food stamp bill by the August recess."

King chairs the Agriculture subcommittee on nutrition. The working group, led by Majority Leader Eric Cantor, will meet again early next week for the second time (before going on vacation again) to try to craft a food stamp bill. But House Agriculture Committee ranking member Collin Peterson (D-Minn.) said the situation in the food stamp working group doesn’t bode well for getting a farm bill passed before the current system of agriculture subsidies expires on Sept. 30th. Could millions of Americans soon be hungry?

The farm bill that House Republicans had recently pushed through (minus food stamps for the poor) was the first time since 1973 that a farm bill had advanced without food stamps. Even the powerful farm lobby sees that ultimate threat to its vested interests. Earlier this month, more than 500 farm organizations called on lawmakers to keep farm subsidies and food stamps together as one.

What's more, this Republican bill is loaded with pork that flies in the face of the GOP's "free-market, small-government" principles. It includes, for instance, a continuation of a so-called counter-cyclical program that pays farmers when crop prices fall below certain levels. Worst of all, it includes a costly expansion of the misnamed "crop insurance" program that farmers use to guarantee revenue from their businesses, essentially locking in profits at the taxpayer's expense. The House bill would expand that boondoggle even more than the Senate's proposed version farm bill --- which in the past, married food stamps to farm subsidies.

Paul Ryan's budget would have cut $33 billion from the SNAP program over 10 years. The original House farm bill contained $20.5 billion in food stamp cuts, much less than the $135 billion envisioned in the House 2014 budget. The current farm bill proposed by the GOP would include ZERO for food stamps.

The Hypocrisy and Rhetoric

Yet there are Republicans in Congress who get huge farm subsidies, but who also voted to slash food stamps in the current farm bill. 14 Republicans received a combined $7.2 million in farm subsidies since 2004, but voted to cut the Supplemental Nutrition Assistance Program (SNAP) to the bone; but only one of those 14 then voted against the version of the bill that would have removed SNAP entirely.

One example of GOP hypocrisy would be Tennessee Rep. Stephen Fincher, who's received $3.5 million in subsidies over the years; but he's on a biblical crusade against SNAP, a program that 22 percent of the people in his home county rely on.

For the GOP, the theory has always been that government programs such food stamps (as well as unemployment and disability compensation) discourages work. Sean Hannity at Fox News likes to ask the question of whether Americans are "better off on food stamps" or "better off with a job". The ideological spin and mean-spirited rhetoric by the conservative media, their think tanks and their bloggers, as well as most Republican politicians, is that food stamps (SNAP) is just anther welfare program for lazy Americans who don't want to work. 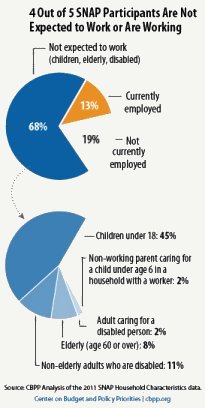 But 47% of SNAP participants are under the age of 18 years old, another 8% are over the age of 60, and 36% were white (non-Hispanic) --- the largest group. But 58% of all SNAP recipients lived in a households with earnings from a job. Increasingly, the faces of people getting food stamps are in a working-poor family --- and not just the unemployed or those on TANF (traditional welfare).

According to the Center on Budget and Policy Priorities, the profile of food stamp recipients has changed over the last decade. The number of households that have earnings while also participating in SNAP has more than tripled from 2000 to 2011. The increase was especially pronounced during the recent deep recession, suggesting that many people have turned to SNAP because of under-employment (Examples would be when one wage-earner in a two-parent family lost a job, when a worker’s hours were cut, or when a worker turned to a lower-paying job after being laid off.)

But what's not usually told is who primarily benefits from food stamps: Marion Nestle on the business of food stamps: “Here’s where the profits come in." Among the corporate beneficiaries, there are the food producers such as Cargill, PepsiCo, Coca-Cola and Kraft — as well as retailers like Wal-Mart.

Consider the irony of companies like Walmart that economically forces their employees to apply for food stamps, and then profits from their food stamp dollars. That's not more public welfare, that's more corporate welfare.

But this food stamp-corporate welfare model goes all the way to Wall Street, and is led by JPMorgan Chase, which administers the SNAP benefits in 24 states. JPMorgan's segment that makes food stamp debit cards (EBT) made $5.47 billion in 2010. These banks who helped gut the American economy, and then were "bailed out" by the American taxpayers, are now profiting off the misery of the working-poor at the expense of the American taxpayers again. So it's not just companies such as McDonald's and Walmart who profit from food stamps, it's also others in the food industry and the big banks.

And all these major U.S. corporations who profit from the managing and selling of products for food stamp money, also benefit in a much more important way: Social stability. All those millions of working-poor Americans have continued to work for increasingly depressed poverty-level wages, but only for so long as they aren't hungry. But civility ends and social unrest begins when people can't feed themselves anymore, because then, hungry people will have nothing else lose. After all, "food" is a human being's very first primal need.

Paul Krugman says, "This is a time to get really, really angry." 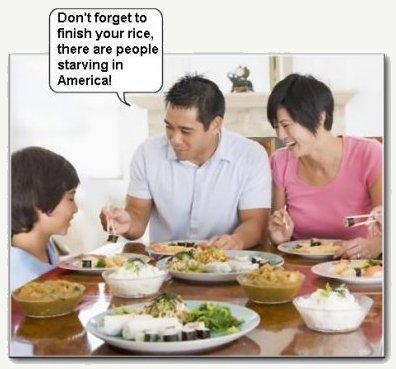 This is just unbelievable they are playing games with people going hungry in the United States. They should separate out food stamps from the farm bill and pass this, 100% funded, pronto.

Starving America? There is already hungry people in the United States but food stamps is about the only thing millions are then able to eat with!

A single unmarried full-time worker without children earning the minimum wage ($7.50 an hour) and working 40 hours a week pulls in a salary of $1,290 a month ($15,600 per year) before taxes --- they gross TOO MUCH for food stamps.

I just got a newsletter today from the HuffPo Hill that says, "Food stamp cuts are happening this fall whether Congress passes a farm bill or not thanks to the expiration of a benefit boost from the 2009 stimulus bill. (The expiration wouldn't be happening this year but for Democrats raiding the funds and not replacing them despite promises to do so.) Food banks in Texas is dramatizing the cuts with a 100 day countdown.