The Institute for Policy Studies has released a no holds barred report on CEO pay, culture.  Even the study title screams outrage, Executive Excess 2013: Bailed Out, Booted, and Busted.  Every year there is a list of the top 25 highest paid CEOs and over the past 20 years this list has included 500 executives.  Of those 500 who made the Wall Street Journal's top 25 highest paid Chief Executive Officer list, a whopping 38% were utter failures at their jobs.  That's millions and sometimes billions in compensation for being a complete incompetent and worse.  The report has three categories for overpaid CEOs who have failed:   the booted, the bailed out and the busted. Those CEOs were forced out, saved by taxpayer bail outs and those who ran companies guilty of outright fraud and theft.  Included in this list are those who simply ran their companies into the ground.  From the report:

While executive performance becomes more brazen, the pay gap between CEOs and average American workers grew from 195:1 in 1993 to 354-to-1 in 2012.  They get theirs no matter what while the rest of America gets the shaft. 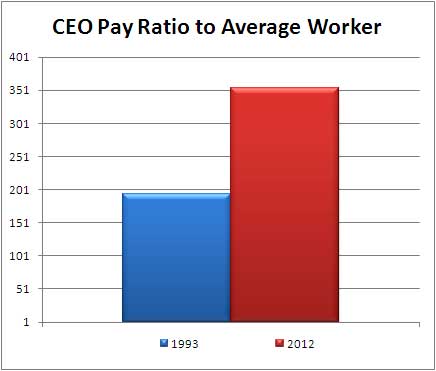 So much for meritocracy eh?  Twenty-two percent of those bad over-compensated CEOs were bailed out by taxpayers.  Of the 14% CEOs booted, those who were outright fired walked away with $47.7 million in golden parachute money.  Some were busy making millions committing outright fraud and this is beyond the great banking fiasco of 2008.

Not counting the CEOs of bailed-out companies and those forced out of their jobs, another 19 of Corporate America’s pay leaders over the last two decades led companies that found themselves having to pay out mega millions in fraud-related fines and settlements.

The report lists exclusive clubs these CEOs belong to. The exclusive clubs are the Men's club, the Billionaire's club and the Taxpayer trough club,  Needless to say there are hardly any women who are in the CEO class and CEO billionaires abound.  With statistics this bad, what else can you do but laugh, short of revolt and revolution for lord knows our government won't do a damn thing about this excessive and unbridled greed.

Even worse, while Congress cuts any help for those in financial trouble, no one is talking about CEOs feeding off of the government coffers.  Additionally EPI estimated tax-deductible executive compensation cost $30.4 billion in revenues from 2007-2010, a lot of dough.

CEOs of firms on the federal government’s top 100 contractors list occupied 62 of the 500 slots — more than 12 percent — on the annual highest-paid CEO lists of the last 20 years. In the same years that their CEOs pocketed some of corporate America’s fattest paychecks, these firms received $255 billion in taxpayer-funded federal contracts

If anyone recalls in 2009, excessive executive compensation became a political issue, cumulating in Say on Pay, a useless piece of legislation which gives shareholders a vote on executive pay packages.  Surprise, this rule has not even been implemented yet by the SEC.  In other words, while all of America knows executive compensation is out of control, not a damn thing has been done about it and as the authors note, the outrageous has become the everyday.  How many financial and economic realities can we list where this is true?

CEO pay goes way beyond economic injustice.  Executives are robbing retirement funds, firing workers, squeezing their pay and even cutting into corporate profits, all to line their own pockets.  Here is what the report recommends as urgent reforms needed to stop this great wealth transfer to the rich through performance pay compensation packages of executives.

Earlier we showed the corporate class, the executives, are creating increasing income inequality in the United States.  The report authors wrote a personal note on how incredible nothing has been done while Americans are robbed blind by corporate executive greed.  Below is an excerpt:

Putting this 20th annual Executive Excess report together has been a sobering experience. The Institute for Policy Studies began this annual series two decades ago because we — and so many other Americans in the early 1990s — considered CEO compensation outrageously lush. CEO pay excess had even become a highly visible issue on the 1992 presidential primaries. Democratic candidates — and even one Republican — loudly denounced the corporate greed grab they saw all around them. But those outrageously lavish CEO pay levels of 20 years ago now seem almost quaintly modest compared to current levels.

The pay gap between large company chief executives and average American workers has grown from 195-to-1 in 1993 to 354-to-1 in 2012. And these CEO figures don’t even include the compensation numbers for private investment fund managers, pay totals that now routinely soar into the nine-digit stratosphere. Two decades have essentially recalibrated our nation’s moral sensibilities. The outrageous has become the everyday. This scares us. What scares us even more: the thought that unless regulators, lawmakers, or shareholders do something to stop this madness, 20 years from now today’s corporate compensation will seem as modest as the pay levels of 1993.

The authors clearly are doing everything in their power to alert America what a problem excessive executive compensation is.  No doubt their efforts will fall on deaf ears as our Congress is owned lock, stock and barrel by these very same executives.

The report goes into much greater depth, with tables, charts, ratings on various legislation efforts and of course, names names.  We suggest reading it in full.

The U.S. was still a British colony and "no taxation without representation" was a major reason for the American revolution, in other words, the Brits were sucking up the profits from colonial wealthy land owners.

More apt is the question is the situation worse today than it was in 1897, probably the top end of the industrialists, robber baron era.

Why focus on CEOs of midsized companies making $46 million a year. Some underwater IPOs and tech giants have principals cashing in that much in stock options every week!!

It is always the executives who make the money off of IPOs, the principles rarely get enough options to pull in that level of dough. Ever heard of a principle making $100 million, or even $46 million?