The BLS employment report shows total nonfarm payroll jobs gained were 214,000 for Cctober 2014, with private payrolls adding 209,000 jobs and government jobs gaining 5,000.  This article graphs the jobs gained since the recession.  The job gains this month sound great until one realizes 52,000 of those jobs were in notoriously low paying Leisure and Hospitality and yet another 27,100 of those jobs were in loaded with low paying jobs retail trade sector  While jobs are consistently being added each month, the quality of jobs still is fairly poor.

The BLS employment report is actually two separate surveys and we overview the current population survey in this article.  Both August and September payrolls were revised upward to 203.000 and 256,000 respectively.

The start of the great recession was declared by the NBER to be December 2007.  The United States is now up 1.33 million jobs from December 2007, but this change has just happened this year.  Notice population has increased and thus America needs jobs for those new people.  Yet almost seven years have passed and the U.S. has only a 1.33 million job increase.

Below is a bar chart showing the employer's payroll growth since January 2008.  This shows major sectors like manufacturing and construction have not recovered from the recession.  In fact, many of the new jobs are low paying ones.  Within health care are many low paying jobs working as attendants and unskilled labor.  Professional and business also holds the temporary jobs. 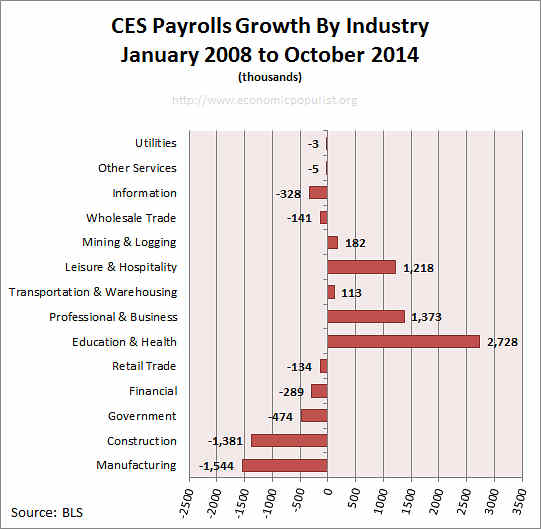 Job gains for the past year are 2.643 million and the breakdown is shown below.   While one might think professional and business jobs are good jobs, this isn't quite true.  There are many low paying office worker and waste management services jobs in this category.  Additionally the BLS counts foreign guest workers in their employment statistics, so in the Science & Technology fields, don't assume those jobs went to Americans.  Finally, the professional jobs includes temporary ones and without temporary jobs the annual gain was 419,300. 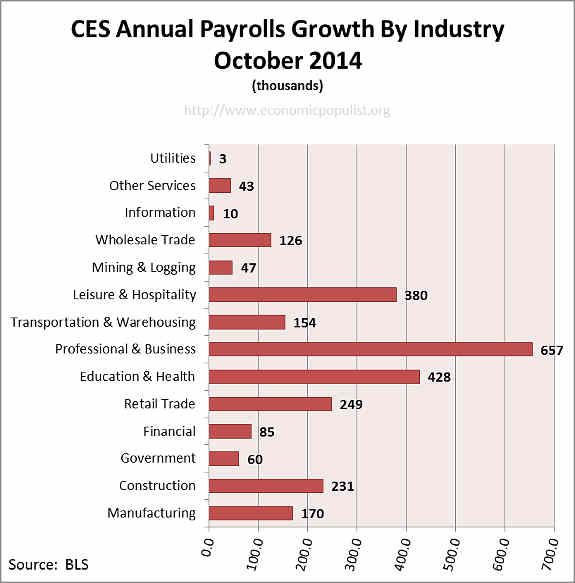 Below is a bar chart of the payroll gains by industry sector for the month.  Within the 52 thousand leisure and hospitality jobs, 42,000 of those jobs are in restaurants and bars.  Worse, every month, an average os 26,000 jobs gained are in the very low paying restaurants and bars.  Within Professional and Business jobs, 15,100 of the gains represent are temporary work .  Retail trade are primarily low paying jobs such as working at grocery stores and gas stations. 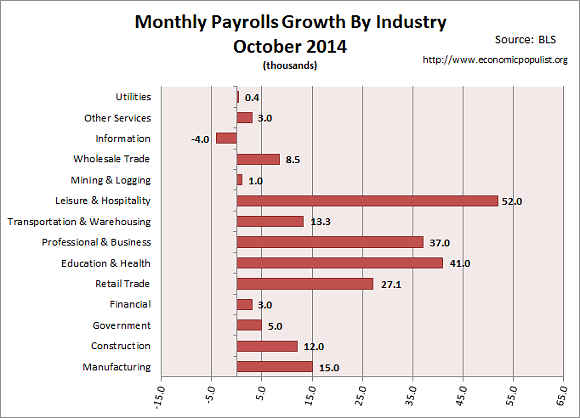 Below is a graph of auto & parts manufacturing, which this month gained 600 jobs.

Government overall gained 5,000 jobs for the month, but these were local government non-education jobs which increased by 10.6 thousand. It is fairly obvious that those lost construction jobs from the housing bubble will not return.   This month construction gained 12,000 jobs. Retail trade are the retail sales outlets like big box marts, direct mailing and anything retailing merchandise.  Retail trade added 27.1 thousand jobs in October with 11.9 thousand of those jobs being in general merchandise stores. Corporate lobbyists scream there is a worker shortage in skilled labor, which is clearly false when one looks at the lack of job gains and flat wages.  Yet temporary help services is also part of professional and business services sector.  Below shows the gains of temporary jobs. The information sector lost -4 thousand jobs.  This includes newspapers and film production so no surprise with so many technological disruptors this sector is really shrinking.

Transportation and warehousing are jobs as one would expect from the sector title, airline workers, truckers, working in warehousing and employment associated with trade, such as port dock workers.  This month the sector gained 13,300 jobs.  Couriers and messengers are included in this figure.

Leisure & Hospitality has the lowest paying jobs of them all.  Just restaurant and bar jobs gained since the start of the recession and is graphed below.  This shows the job growth America is getting is in jobs which cannot pay rent and put food on the table.

We broke down the CES by industry to see what kind of percentage changes we have on the share of total number of payroll jobs from 2008 until now.  Below is the percentage breakdown of jobs by industry for January 2008. 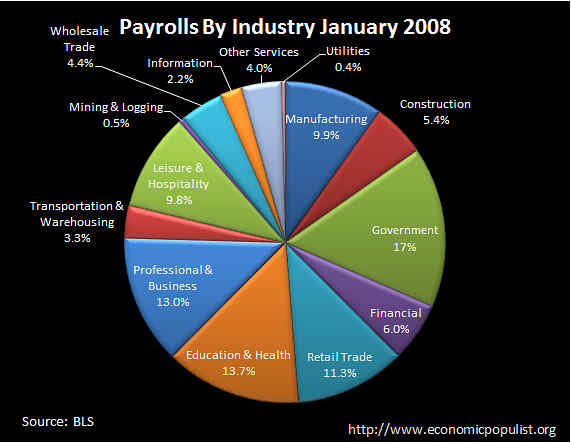 Below is the breakdown of jobs growth per industry sector for October 2014.   From these two pie charts we can see the job market has changed into more low paying service jobs of health care assistance and restaurant workers.  Cconstruction jobs shrink relative to total payrolls by 1.0 percentage points.   Manufacturing, of which the auto industry is a part, has contracted 1.3 percentage points as share of total jobs. 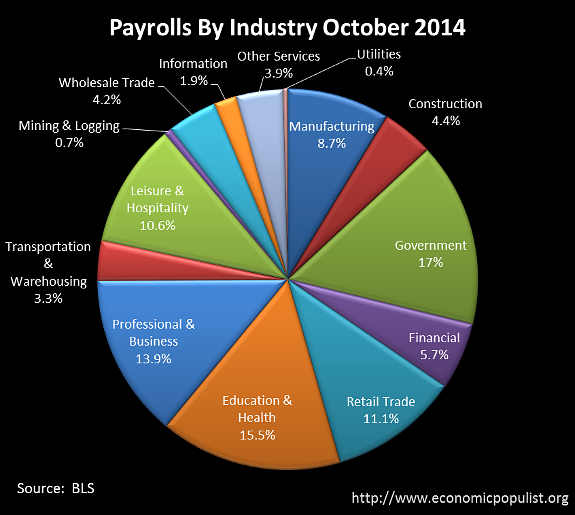 Some in the press really blast payrolls and mention the low paying jobs being created.  This is true yet in comparison to a year ago things have finally consistently improved.  Yet manufacturing in particular, we believe is more a victim of bad policies, such as trade than the lingering after effects on the recession and America needs those type of higher wage jobs to restore the U.S. middle class.

Atlanta Fed: "As reported by the U.S. Bureau of Labor Statistics, roughly 10 percent more people are working part-time in September 2014 than before the recession. Part-time workers generally earn less per hour than full-time workers, so lower hours and lower per-hour earnings both contribute to their lower incomes ... During the recovery, the median growth rate of full-time workers has been higher than that of part-time workers. In particular, wage declines were more common among part-time workers ... Education matters for wage growth, but the pattern of lower wage growth for part-time workers persists for people with broadly similar educational attainment."
http://macroblog.typepad.com/macroblog/2014/11/wage-growth-of-part-time-...

Economic Policy Institute: "The weak labor market of the last seven years has put enormous downward pressure on wages, and there has been no significant pickup in nominal wage growth in recent years ... This lackluster wage growth is a clear indicator that there’s still considerable slack in the labor market. With so many Americans looking for work — and millions more who would be looking for work if job opportunities were stronger — employers simply don’t have to offer wage increases to get and keep the workers they need.”
http://www.epi.org/blog/economy-adds-jobs-but-we-need-to-raise-americas-...

I show the increase in part-time here in the CPS overview.

Part-time has gone down in 2014, but the levels are still higher than before the recession.