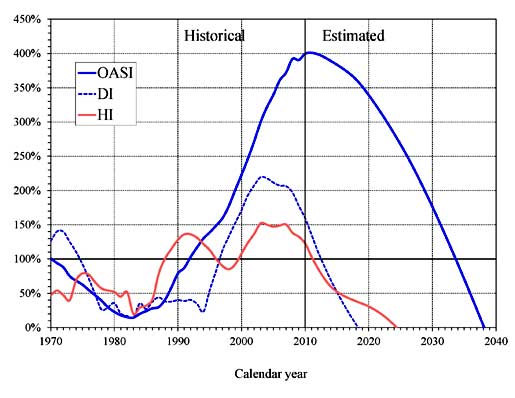 The above chart summarizes the run out dates for social security (OASI), disability insurance (DI) and Medicare (HI). When the line hits zero, the fund is out of money. From the report:

Social Security expenditures exceeded the program’s non-interest income in 2010 for the first time since 1983. The $49 billion deficit last year (excluding interest income) and $46 billion projected deficit in 2011 are in large part due to the weakened economy and to downward income adjustments that correct for excess payroll tax revenue credited to the trust funds in earlier years. This deficit is expected to shrink to about $20 billion for years 2012-2014 as the economy strengthens. After 2014, cash deficits are expected to grow rapidly as the number of beneficiaries continues to grow at a substantially faster rate than the number of covered workers. Through 2022, the annual cash deficits will be made up by redeeming trust fund assets from the General Fund of the Treasury. Because these redemptions will be less than interest earnings, trust fund balances will continue to grow. After 2022, trust fund assets will be redeemed in amounts that exceed interest earnings until trust fund reserves are exhausted in 2036, one year earlier than was projected last year. Thereafter, tax income would be sufficient to pay only about three-quarters of scheduled benefits through 2085.

Disability insurance is in a poor state. Those funds are expected to run dry by 2018. Medicare is now projected to run out of funds by 2024, now 5 years earlier than reported in the last trustee annual review. 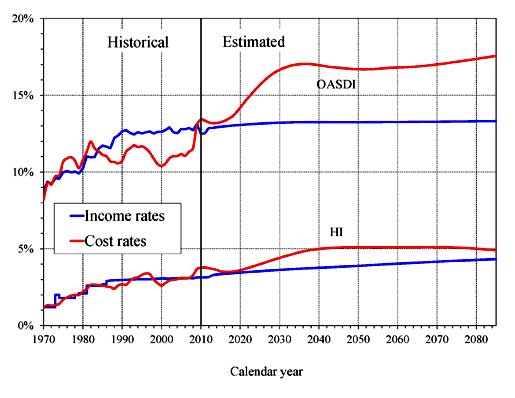 Because the primary source of income for OASDI and HI is the payroll tax, it is customary to compare the programs’ non-interest income and costs expressed as percentages of taxable payroll, the “income rate” and “cost rate” shown in Chart B. Both the OASDI and HI annual cost rates increase over the long run from their 2010 levels (13.40 and 3.76 percent). Projected Social Security costs grow to 17.01 percent of taxable payroll by 2035, decline to 16.69 percent in 2050, and then rise gradually thereafter, reaching 17.56 percent in 2085. Medicare HI costs rise to 5.11 percent of taxable payroll in 2049 and level off thereafter under the intermediate assumptions employed in this report, with an ultimate cost rate of 4.90 in 2085.

Why are deficits so intense? Baby boomers, or those born from 1945 to 1961, and the lack of high income young people to replace them. There simply are not enough working people paying into the system to replace the boomers. No surprise since the system has been burning the candle at both ends, as is American society. New workers, if they managed to get through college, are saddled with extreme debt these days in student loans. Additionally wages are repressed, thank you globalization. Age discrimination is rampant, literally institutionalized and unchallenged, cutting short earning years. People are living much longer, yet society has not adjusted to consider older people a vibrant part of the work force. Plus we have the never ending personal income malaise with stagnant wages.

Additionally revenues on the social security end aren't exactly progressive. Social security taxes are currently capped at $110,100 for 2012. That means big fat cats making billions don't pay any more than the little guy. Seems kind of strange since hedge funds and Wall Street lost so many people's retirement through wild market rides. Another problem is the lack of traditional pensions, swapped out with 401k Wall Street gambling casino funds, to reduce corporate costs long term. While wages are most visible, corporations reducing retirement has been going on since the 1980's. Now the chickens are coming home to roost.

You can bet politicians will be jumping all over this, odds on to figure out how to cut benefits for millions of Americans who have nothing else but social security and medicare.