Beyond accelerated depreciation schedules, parking one's money offshore is the #2 cause of lost tax revenues.  Below is the GAO's table of the top seven reasons tax collections were $181.4 billion short for 2011. 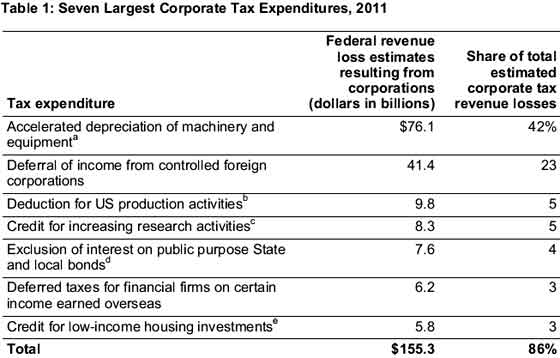 At this investigative site is a treasure trove of corporations and individuals parking their money offshore, using loopholes to avoid paying taxes and outright money laundering.  Yet even when brazen, money laundering gets a slap on the wrist with no real penalties.

We have the Obama administration seemingly hell bent on cutting social security benefits through chained CPI, yet nary a wink and a nod occurs towards the loss of tax revenues from big business and individuals using pass through tax business entities to avoid taxes.  We even have more tax avoidance being enabled through trade treaties.  The below graph shows how low corporate tax revenues are as a percentage of total the government collects, the lowest in 60 years.  Corporate profits, on the other hand, are at a 60 year high. 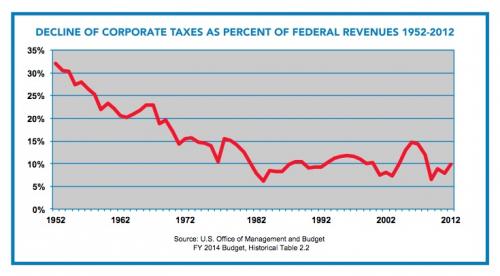 To wit, the Institute of Policy Studies has an updated list of the biggest corporate tax dodgers, reprinted below:  Notice how some of these same companies demand more cheap labor, offshore outsourcing, fight any attempt to improve U.S. labor conditions and decry consumer protections.

Bank of America
Had $17.2 billion in profits offshore in 2012 on which it paid no U.S. taxes. Reported it would owe $4.3 billion in U.S. taxes if profits are brought home.

Citigroup
Had $42.6 billion in profits offshore in 2012 on which it paid no U.S. taxes. Reported it would owe $11.5 billion in U.S. taxes if profits are brought home.

Microsoft
Saved $4.5 billion in federal income taxes from 2009-2011 by transferring profits to a subsidiary in the tax haven of Puerto Rico. Had $60.8 billion in profits stashed offshore in 2012 on which it paid no U.S. taxes; reported it would owe $19.4 billion if profits are brought home.

There are so many loopholes in the corporate tax code, multinationals never pay the official 35% corporate tax rate.  As we see above many instead get money from us in the form of rebates.  These same corporations are the ones lobbying for austerity, to cut social safety nets like Medicaid, Medicare and social security, while they demand Congress lower further the corporate tax rate and add even more loopholes.

Senator Bernie Sanders has been fighting hard against deadbeat corporations and managed to get an amendment adopted in committee to curtail corporations dodging their tax bill.  The corporate tax legislation is in committee so we would be surprised if this survives at all on passage or isn't watered down to ineffective, in spite of Senator Sanders' heroic efforts.

Sanders’ amendment was adopted 12 to 10 as the committee began work on a budget blueprint for the next fiscal year.

“At a time when corporations are experiencing record-breaking profits while corporate income tax revenue as a percentage of GDP is near a record low, it is time that we demand that corporate America contribute in a significant way toward deficit reduction,” Sanders said.

About one out of four large, profitable corporations now pay nothing in federal income taxes.

“When Bank of America, Citigroup, Wells Fargo and other large financial institutions needed government assistance in 2008, they wanted all of the advantages of being American. They went to the U.S. Treasury Department and the Federal Reserve to receive trillions of dollars in financial aid. But when it comes to paying taxes, these same financial institutions want to avoid U.S. taxes by sheltering their profits in the Cayman Islands, Bermuda, the Bahamas or other tax havens,” Sanders said. “That is unacceptable.”

Like everything else in this country, the tax code is written to benefit the super-rich and multinational corporations.  Congress is deadlocked and maybe that is a good thing, for if they reform the corporate tax code, odds are the hordes of corporate lobbyists will make sure the new tax rules will be worse than it currently stands.