I hate initial weekly unemployment claims as an economic metric. It is a volatile number, subject to revisions, and has much statistical noise. That said, every single week, over and over, we are simply not seeing initial unemployment claims really drop. One has to wonder where all these people are coming from and has every single American at this point been fired from a job? 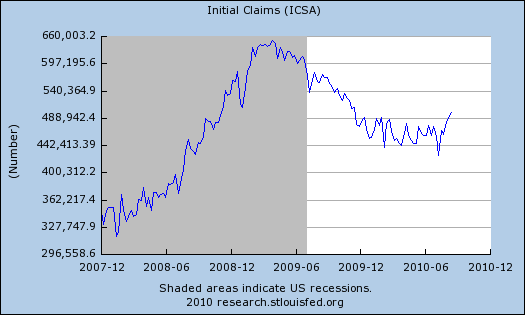 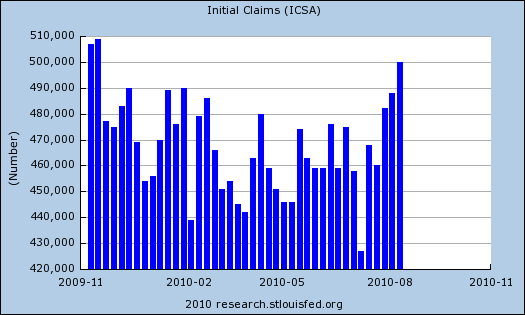 The financial headline buzz du jour is all about initial weekly unemployment claims, which increased by 19,000. Why the U.S. jobs crisis is suddenly alarming news, when we and many other economic blogs have been sounding the alarm for years, is anybody's guess. Last week we showed, initial unemployment claims are simply too high and have stayed that way for months. Another alarming sign is the Challenger & Gray Job Cut report. Announced layoffs rose 6% from last month, the 3rd month in a row announced layoffs increased.

So far this year, the government and non-profit sector has announced 105,969 job cuts, nearly triple the next largest job-cutting sector: the pharmaceutical industry, which has announced 37,010 job cuts, 30 percent fewer than at this point last year. One might see blazing headlines that initial weekly unemployment claims for March 25, 2010 dropped 14,000 to 442,000. But note the below, contained in the press release:

This week's release reflects the annual revision to the weekly unemployment claims seasonal adjustment factors. The historical factors from 2005 forward have been revised.

From 2005 they revised the data? What kind of yearly seasonal adjustment is that?

Then from MarketWatch we have (looks like someone got on the phone?)

Latest figures reflect annual revisions to the data that put claims 10,000 lower than they would have been under the old methodology, a Labor official said.

Without the annual revision, claims would have totaled about 453,000 The 4 week moving average since the start of this recession:

This means the 4-week moving average is essentially unchanged, at a lower level than at any time in the last 3 months.