Women are still low on the economic totem pole.  A new Census report shows nothing has changed, women still make 77¢ to a male's dollar when both are working at full-time jobs and if one includes part-time, the ratio is even lower, 71¢.  Worse than that, women with families and no husband around make the lowest median income of all, $34,002.  A male equivalent with no wife present makes 30% more.  Full-time jobs for men increased by a million in 2012, yet for women, there were no full-time employment gains.  Males clearly get more of the full-time jobs with 71.1% working full time in comparison to only 59.4% of women who work are doing so full-time.  As women are older, the income disparity ratios become worse as shown in this below Census graph. 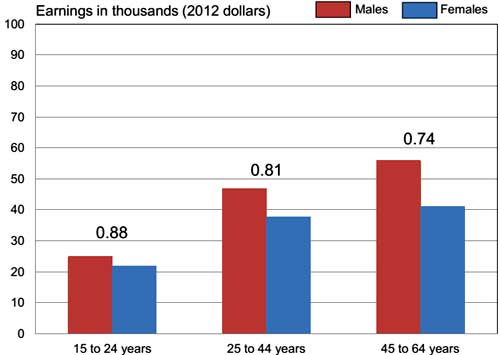 No surprise with that level of income inequality between the sexes, women dominate the poverty rolls.  Overall 16.3% of females are in poverty in comparison to 13.6% of males.  Women over the age of 65 have a poverty rate almost double their male counterparts, 11.0% to 6.6% for older men.  In 2012 a whopping 30.9% of women with families lived in poverty and their kids represent 47.2% of all children growing up in poverty stricken conditions.  Compare that statistic to male householders with families.  Their poverty rate is 16.4%. 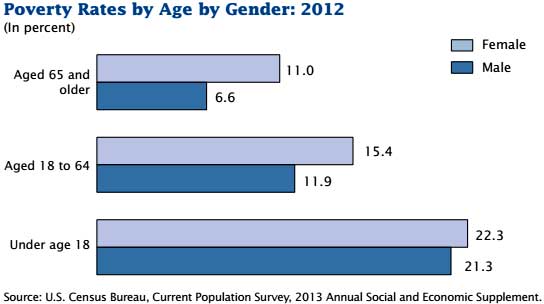 One of the reasons women stopped gaining full time jobs in 2012 is discrimination, pure and simple.

In 2010 married mothers who had lost their jobs spent longer than married fathers looking for work. Once they did find a job, their earnings decreased more than men’s—by $175 a week, or $9,100 a year.

The discrimination against women clearly still abounds.  Just recently both Bank of America and Merrill Lynch settled cases, BoA $39 million and Merrill for $160 million.  Yet the bias against women just keeps on coming.  This isn't some warm fuzzy situation these days.  Gender bias needs to be eradicated because women need the money to survive.

On Wall street women are still nowhere, even after working their asses off.  There are zero female CEOs in the world of finance.  But the element which is most brazen is how women are first up in layoffs.

When it comes to layoffs, “ladies first”

The 1987 stock market crash disproportionately affected women analysts in Groysberg’s research. The same pattern repeated itself more broadly when the industry contracted in 2000. A Securities Industry Association study of the bursting of the dot-com bubble found that women in the industry fell from 43% before the tech boom collapsed in 1999 to 37% in 2003 after industry-wide layoffs.

In the most recent 2008 financial crisis, women lost out again. Sallie Krawcheck, whose rise on Wall Street was meteoric until her job was eliminated in a reorganization at Bank of America two years ago, has become among the most outspoken opponents of this backslide. Formerly at the top of Citibank’s wealth management division, Krawcheck told the New York Times in April, “If you start to list off senior women on Wall Street, there are fewer today than there were even a few years ago. It’s a shame.” Research done by the New York Times and published last spring revealed how thin the ranks of women are among key decision-makers on Wall Street. In the Times’s graphic, the percentage of women on the management committees of Citigroup, Goldman Sachs and Bank of America were 4%, 13% and a robust 36%, respectively. Goldman Sachs does not disclose, for instance, how many of its 400+ partners are women. Subsequently, Citibank has doubled its female representation on the management committee by adding one more woman to its 24-member team.

Women are going backwards in Science, Technology, Engineering and Mathematics fields.  According to a new Census report

Growth in women's share of science, technology, engineering and mathematics occupations — commonly referred to as STEM jobs — has slowed since the 1990s, according to a U.S. Census Bureau report released today. Women's employment in STEM has slowed because their share in computer occupations declined to 27 percent in 2011 after reaching a high of 34 percent in 1990.Blacks and Hispanics also remain underrepresented in STEM jobs.

Additionally there is great disparity for the women who have managed to stay in their Science & Technology field.  Males make $91,000 a year while women are only making $75,100 on average and while women make up 41% of STEM graduates, only 15% actually have a job in a STEM related occupation.

Generally speaking economic injustice for women is alive and well and one of the main ways this is achieved is occupational segregation.  This is known as the glass ceiling.  Yet if females manage to even get the job typically assumed to be a male domain as we see above, they are still being paid less.

Even when trying to remove all variables from the gender pay gap such as college degree, school, even grade point average, the results come in fairly badly as these researchers found.

They tracked male and female MBAs graduating from the University of Chicago from 1990 to 2006. First they controlled for previous job experience, GPA, chosen profession, business-school course and job title. Right out of school, they found only a tiny differential in salary between men and women, which might be because of a little bit of lingering discrimination or because women are worse at negotiating starting salaries. But 10 to 15 years later, the gap widens to 40 percent, almost all of which is due to career interruptions and fewer hours. The gap is even wider for women business school graduates who marry very high earners. (Note: Never marry a rich man).

If this midcareer gap is due to discrimination, it’s much deeper than “male boss looks at female hire and decides she is worth less, and then pats her male colleague on the back and slips him a bonus.” It’s the deeper, more systemic discrimination of inadequate family-leave policies and childcare options, of women defaulting to being the caretakers. Or of women deciding that are suited to be nurses and teachers but not doctors. And in that more complicated discussion, you have to leave room at least for the option of choice—that women just don’t want to work the same way men do.

The wage gap by occupation is simply across the board and this is assuming the women could even get the job in the first place.  Below is a graph from IWPR.  As we can see women are simply making less than men. 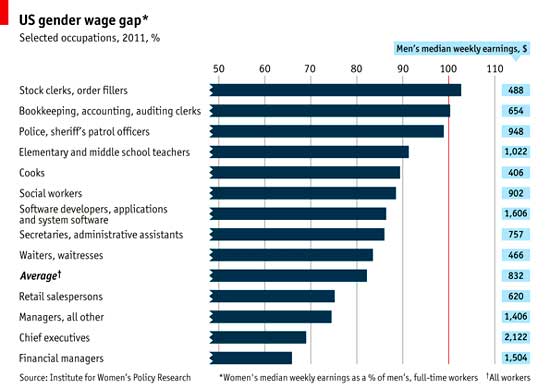 Another study found women doctors were making a whopping $50,000 less than their male counterparts.  Yet another group, IWPR, shows women won't be economically equal to men until 2058 and economic gender disparity has plain gotten worse.  There has essentially been no progress on economic equality since 2001 in the United States.

No doubt we'll hear various rationalizations and excuses again from various groups trying to explain away the obvious.  Women are being discriminated against in America.  The excuses will range from women having children and staying at home by choice, to somehow women are less fill in the blank than men.  Bottom line woman are working just as hard and when they do obtain the career, they are making way less and even multi-million dollar lawsuits don't change a thing.

I have been working for 25 years since I finished my MBA. I never married and have no children. I am earning as much as my male counterparts. The BIG unwritten, undocumented item in this article and others is not the level of work being done, but the "extras". The raises and bonuses don't come from a job well done, that is expected. The "extra" money comes from joining related organizations, taking on board positions and being "visible". Most women I know with families do very little, if anything at all, above or beyond the 9-5. We all have made our decisions. But please tell the truth about this!

If you read the studies they account for women who are single, no kids who work way past 8-5 and do join organizations and are active, network, go to conferences, speak, etc.