Icelanders who pelted parliament with rocks in 2009 demanding their leaders and bankers answer for the country’s economic and financial collapse are reaping the benefits of their anger.

Since the end of 2008, the island’s banks have forgiven loans equivalent to 13 percent of gross domestic product, easing the debt burdens of more than a quarter of the population,

Federal Reserve Chair Ben Bernanke's son wants to be a Doctor. To get there he's racked up over $400,000 in student loans. That's obscene! We wonder why health care is so expensive, good lord, to become a Doctor in this country you're racking up half a million in debt!

We showed student loans are the driver of consumer credit increases. Now a new study by the NY Fed shows 14% are past due. 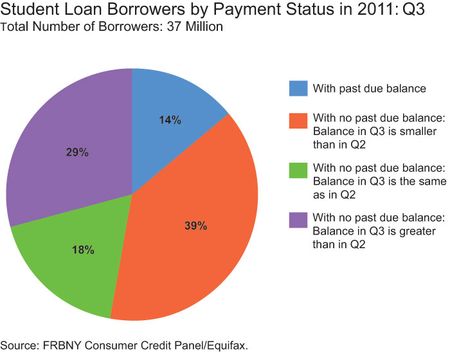 Yet student loans have grace periods. You don't have to start paying them back until you graduate and there are other deferments. The New York Fed removed the student loans still not having to be paid back and came up with some astounding bad news, 27% of those who must be paying back their student loans are past due. 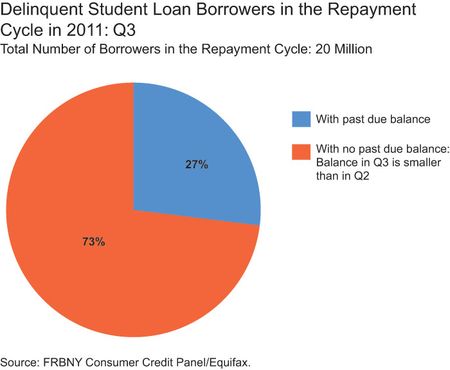 h/t to the The Wall Street Journal for amplifying this NY Fed study on the student debt crisis.

Stoners Better for the Roads Than Drunks

We all know criminalizing marijuana is stupid on a host of levels. From pot being a major cash crop to being a good chunk of GDP, we now this:

8.7%: The drop in traffic fatalities in states with medical marijuana laws.

Why is pot still illegal? I'd rather run into a stoner saying oh wow man any day of the week than a raging, puking, violent drunk.

We've all seen surprise numbers on housing data and other economic reports. MarketWatch discovered two thirds of economists believe the warm weather is skewing the data and messing with seasonal adjustments.

Two-thirds of Wall Street economists say abnormally warm weather is making the U.S. economy look stronger than fundamentals would suggest, according to a survey released Thursday.

In a special question to the Blue Chip Financial Forecasts, 66% of those polled responded yes to a question asking “has unseasonably warm and dry winter weather in the U.S. led to an overstatement of the economy’s underlying strength in recent months.”

That weather has had an impact on recent economic data is pretty clear after the fourth-warmest January on record in the U.S.

An Update on MF Global

We have yet another damning interview via Bloomberg law that shows, those MF Global investors are just never gonna get their money back. Now, of course, there is no criminal liability plus the case is exposing a big gaping hole in the regulatory system.

Buzzflash gets it and exposed Apple on jobs.

an Apple executive claimed: "We [Apple] don't have an obligation to solve America's problems." That was in response to Apple shipping so many potential US jobs overseas to these slave-wage sweatshops; e.g., "90 percent of the parts of an iPhone are made outside the U.S."

But there's another insidious way that the high-tech industry denies jobs to US citizens. It's called the H-1B visa, which allows America's technological firms - and other specialized employers - to bring in foreign employees, frequently at a lower wage package than might be paid to an individual with the same qualifications who is an American citizen. There are many arguments against the program, primarily the allegation that there is generally no actual shortage of US citizens with high-tech skills for the work done by H-1B visa holders.

President Obama appeared blindsided by a question on a Google Plus interactive town hall the other day from a woman whose husband had been laid off by Texas Instruments:

Spy Ring Traced Back to China

What a surprise that a industrial espionage spy ring would be traced back to China:

One document taken in the search of the Liews’ home and filed with the court is a letter Mr. Liew addressed in 2004 to Pangang officials, in which he stated that a high-ranking Chinese Communist Party leader asked him in 1991 to bring titanium-dioxide-making secrets back to China.

“Some years ago China let me know that she urgently needed titanium white by chlorination technology,” the letter reads. “After many years of follow-up research and application, my company has possession and mastery of the complete DuPont way.”

Want to know how China rips off so many U.S. corporations? We let them.

Matt Taibbi makes another stab at explaining mortgage backed securities. If the below is classic stand up comedy, well then, aren't derivatives a comedy of errors?

If you haven't heard about this, prepare to be disgusted. There is this meat by-product, sprayed with ammonia which is being added to hamburger. ABC News has been covering the story, trying to get something labeled for a week now. ABC news has been getting a list of groceries who don't use this nasty stuff, but it's in 70% of hamburger sold to you at the grocery.

“Pink slime” is beef trimmings. Once only used in dog food and cooking oil, the trimmings are now sprayed with ammonia so they are safe to eat and added to most ground beef as a cheaper filler.

Balloon Juice has a round up of the latest disgusting, unsafe meat practices going on in the U.S. right now.

The Wall Street Journal published an article on donor harvesting. Beyond the Macabre descriptions and the lack of a EEG test to make sure you're really brain dead, is this:

Organ transplantation—from procurement of organs to transplant to the first year of postoperative care—is a $20 billion per year business. Average recipients are charged $750,000 for a transplant, and at an average 3.3 organs, that is more than $2 million per body. Neither donors nor their families can be paid for organs.

If people cannot be compensated for their organs, why should Doctors and Hospitals? See the motivation here, Good freaking God, look at the profits/business on organs!