While the Dow hit 14,000 and Wall Street cheered, economic indicators cast a broadening dark shadow.  Wall street is partying like it is March 2000.  Yet Q4 GDP showed economic contraction.  The response of the press and Wall street was to ignore Q4 gross domestic product as some sort of illusion and anomaly. We don't think so.

First, the reduction in real Federal defense spending was 22.2% from Q3 and is really a record decline. Some point to Q4 being a time when defense expenditures are low, due to their need to spend their budget by Q3, the end of the fiscal year.  Indeed, defense spending did boost Q3 GDP.  Yet if we look at the below graph, federal defense consumption and investment really crashed and burned for Q4.

The reduction was pretty much all services used by national defense.  These are research and development and support services for installation, weapons, personnel, transportation and travel.  There hasn't been a worse quarterly decline in defense spending on services since Q1 2000. 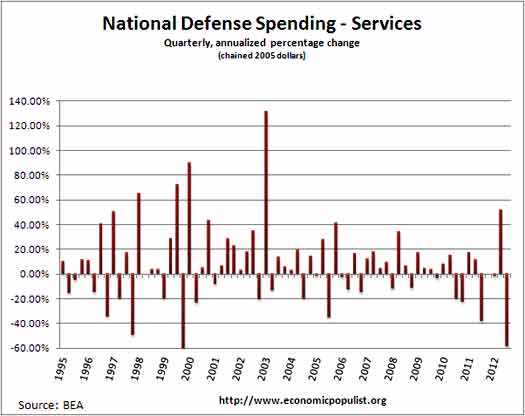 On just the investment side, the reality is defense investment has been driving the economy, but planned defense cuts will curtail that significantly.   Below is adjusted for inflation investment by federal defense. 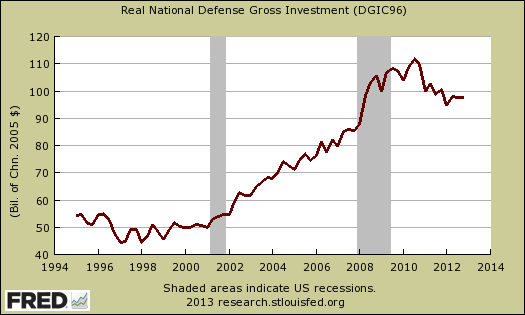 Defense spending is rarely mentioned as economic activity and a stimulative one at that, but two wars, the war on terror, and hordes of defense contractor lobbyists have been costly.  Those costs also stimulate the U.S. domestic economy.  While some blame the fiscal cliff and Simpson-Bowles for the national defense spending declines, the reality is the Obama administration is planning defense budget cuts all the way to pre 9/11 levels.   That actually will cause the economy to contract.   Who says war isn't a business?

We cannot find any actual announced cuts by the DoD in services in preparation for the fiscal cliff.  That said, there were announced defense budget cuts generally earlier in the year to the tune of $487 billion over the next 10 years.  That is in addition to the forced $600 billion in cuts that were part of sequestration, which were threated if the fiscal cliff wasn't resolved.

Sequestration is still on the table as the debt ceiling was simply suspended for three months.   The temporary raising of the debt ceiling is now tied to the budget, so the U.S. could still be looking at another  over $1 trillion in defense budget cutting over 10 years.

The Bipartian Policy Center estimates the defense cuts to now be $55 billion over the next seven months    The job loss estimates are ranging from the CBO's 700 thousand  to one million for 2013 and expect 1.2 percentage points to be shaved from 2013 annual GDP.   Imagine what would happen to the economy if House Republicans demand more slash and burn budget tactics, targeting America's social safety nets.

Another element which causes 4th quarter GDP to implode was non-farm inventories. Businesses shed what they had on hand for making products to stock for future sales.

Some are referring to the January ISM manufacturing index , which showed an increase in inventories, to claim the GDP contraction is just temporary.  Even though the manufacturing ISM indexes do track other indicators, manufacturing inventories are only part of the inventory changes which contribute to GDP.  Factory orders show no such hope that inventories will grow in Q1 2013.  A decline in inventories is actually an indicator of weak economic demand.  Goods are not flying off the shelves so businesses cut back to what they believe they really need for future production and business activity.

There was one effect on Q4 GDP that was temporary.  Superstorm Sandy as we outlined here and here, did negatively impact 4th quarter GDP.  Northeast shipping ports were temporarily crippled, which possibly affected Q4 exports.  Yet GDP imports are always revised and almost always upward in the 2nd estimate for gross domestic product.  In other words, yes exports were probably affected by the storm, but that doesn't negate the bad trade deficit figures we see monthly.

We also have Congress and this administration focused on budget cuts instead of stimulating the economy enough to create jobs. While budget deficits do matter, ignoring America's jobs crisis as not government job #1 explains in part why America continues to suffer a weak economy.

Bottom line, ignore 4th quarter GDP at your peril.  There is nothing in economic reports so far which show things will greatly improve.  If automatic budget cuts go through it is more probable the economy will see a new recession.   It is only in the minds of those on Wall Street and politicians believing their own spin on K street that the economy is swank and we're on the road to recovery.

Look who's invited to the White House, why it's Lloyd Blankfein, bankster himself. This is what's going on when the economy isn't improving for years and Americans can't find jobs, the White House invites people that should be in prison for life for money laundering and fraud to the White House! And guess what they are discussing? Do you think this President and Congress are focused like "lasers" to help Americans get jobs? Hell no, the President of the USA is meeting with banksters and other CEOs to get more foreigners here to make it even more difficult to survive in America. Who out there thinks this government is for us and by us anymore? I mean people that destroyed the global economy are meeting with the President to make it impossible to work in our own country.

Average Joe or Jane is deemed "unqualified" to work in the USA for a living wage despite being a veteran with a BA or a PhD in nuclear physics and 30 years of experience and meeting exact requirements for the job, but these people with no experience or education in immigration or struggling in normal jobs are deemed fit to form immigration policy (which also affects the budget, law enforcement, education, infrastructure, and many other areas) and get to speak directly with the Pres.? Sickening.

I wonder how many favors, promises, speech fees, and jobs for friends and family will be lined up today. By the way, how many unemployed and working poor were invited today. Let's see, let's count them, give me a sec. . .
http://www.businessweek.com/news/2013-02-04/goldman-s-blankfein-yahoo-s-...

Business wants foreign workers to technology transfer and labor arbitrage. Last CIR in 2006 2007 didn't even really offer a "pathway to citizenship" due to the structure, it was an illusion, all to flood the U.S. with STEM and other degreed workers.

Kurtz, you should try the Instapopulist for outrages like this. Click on rich text editor to pull up the WYSIWYG editor and the chain icon is a way to format links.

Looking at Europe, the numbers are civil war causing. Don't see American exporting to much to Europe as that place is as bad or worse than us. Greece and Spain unemployment rates for youth at 50%+. Italy and Ireland 30%+. UK 20%+, France, Poland, Sweden, basically lots of countries 20%+. That's a lot of pissed off people that have no hope, and if immigration is the "answer," not too sure people with no jobs are really in the mood for more people flooding the labor market. After all, how many people can compete for non-paying internships before someone stops applying, turns to his friends and neighbors, and says, "This system ain't working for us, now is it?" Perhaps the politicians at that point should answer a few questions if they aren't too busy hiding behind armed guards and in SUVs.

Beyond showing Keynes works, that's why deficit reduction during a recession and fundamentally not gradual is a disaster. Look at what has happened to Europe. Entire countries thrown into depression with no work to be had.

While I expect Q4 GDP to be revised to growth, there are elements on this report, outlined above that really are warnings. #1 is how dependent the economy is on war, defense spending and how drastic cuts will contract economic growth.

We also overview many monthly economic reports which quantify changes in inventories, for this reason. We sure do not see any dramatic increase in inventories from these reports, contrary to what the press is claiming.

Just another example on why budget cuts cannot be dramatic, must be gradual and also must be timed with regular economic cycles. Something I am sure politicians could care less about....the economy.

Argentina gets in trouble with the IMF for hiding its rampant inflation, but how is the IMF (and notably the US as chief-funder) so different? Like our inflation and unemployment numbers aren't complete jokes meant to appease people? Good jobs decreasing with ever greater frequency, people in jobs being pushed to their limits by bosses that see themselves as petty tyrants, HR screening anyone that will stand in the way (e.g., "overqualified"), and people that served their country overseas return to their own country to find they suffer one of the highest unemployment rates of any group. But because the Senators and Emperors in Rome and the provinces are still enjoying the spoils of sloth and corruption, all is well? Only because they purposely ignore and lock out anyone desperately demanding change to save the USA and fellow citizens. How long before Buenos Aires and the countryside of Argentina come to DC? NYC? LA? Away from the financial and political centers (i.e., $ for nothing centers), aren't things already approaching levels we never thought we'd see in the Western World? Argentina - harbinger? Instead of Falklands/Malvinas distractions/wars (used in the 80s and now again), we have Afghanistan, Mali, Syria, Iran, North Korea, take your pick. Sure, look 3,000 or 6,0000 or 12,000 miles away, but whatever we do, don't look inside our borders at what's going on.

Why just last week Lloyd Blankfein of Government Sachs or Goldman Sux was meeting with Obama and helping sell out American workers in the name of "immigration reform" and "fiscal cliff talks."
But I guess Goldman is still doing "God's Work" aka operating a criminal cartel. Because Goldman is connected to an account in Zurich that just got frozen by the SEC pending an investigation into insider trading. Apparently Goldman was recommending a "sell" to its clients on Heinz, when just before the Heinz merger, massive call options were purchased in a Zurich Goldman account.
Aren't the crimes by Goldman numbering in the hundreds or thousands by now? And yet they are still allowed to exist and conduct business and dictate our Nation's policies. What's crime and criminality anyway, it's all about $ and access and self-serving politicians getting rich (as yet another Congressman was busted for using $750,000 in campaign cash to buy all sorts of crap). Politicians and Wall Street - they never worry about anything even when they break laws and get rich at our expense. The only people suffering are the good, honest people that did everything they were supposed to. So why bother behaving anymore? Just get screwed in the end anyway unless . . .

Trend in Temp Workers may not be Temporary - 24394 reads
How Many Jobs Are Needed to Keep Up with Population Growth? - 249395 reads
Another Gift to Financial Conglomerates - 7443 reads
Safeway Skewered for Throwing 6,000 Workers Under the Bus in Video Parody - 341480 reads
Seeking Alpha Author asks the obvious, why is the U.S. flooding the labor market with more immigration? - 22813 reads
March global oil surplus at 17.7 million barrels per day; 2nd qtr surplus to be at 6.2 million bpd despite OPEC-led cuts - 4731 reads
Dollar decline taking on "life of its own" - 14295 reads
Long-Term Unemployed Baby Boomers in 2013 - 133626 reads
Obama's CIO Vivek Kundra Previous Close Employees Arrested for Fraud, Bribery - 96097 reads
House discusses 401k/IRA confiscation - 222604 reads