This week we have a corporate biased, but very well done, PBS documentary Commanding Heights.

Contained within this video are the Russian and 1997 Asian Financial Crisis, the Great Depression and Globalization. Also is the admittance that the interactions and dependencies of global markets, financial markets is not well understood.

Guess what folks, there is a new economy!    I'll bet you didn't know that just as much as stock evaluations and profit didn't matter in the dot con era. 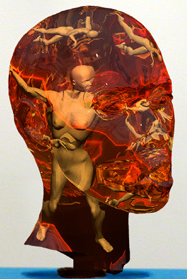 At the helm of the Obama plan is the Chicago School of Economics, heavily promoting behavioral economics..

Aha, if we all just made the right choices, none of this bad shit would be happening right?  A new article, Obama's Geek Economist, in the MIT Technology Review, gives some foreboding hints at what we could expect in economic policy for an Obama administration.  We're being told (sold), we need a new economist for the new economy.

As I recall our economy is a very old story and it's called labor arbitrage.

Obama subscribes to a distinctive set of economic theories developed at the university [of Chicago], and to a corresponding set of policy prescription

Greetings folks, the start of new week and thus we kick off another episode of Manufacturing Monday! Never a dull moment when it comes to covering stuff that either goes into the products you buy, or the impact that that consumption leads to. Now originally, I had these other items on bio-fuels, hydrogen cars, China and oil, and a few other things. But I see now that my section on the bailout of the US automakers is so big, that the whole thing is too long. So, if it is OK with you, I will post those items tomorrow.

A road often driven by these three

brought to you by your tax code at work

Sounds like a slogan to do business in the US doesn't it? Yet assuredly that is not what is happening when corporations line up like the Oklahoma land rush to move to China and India.

Yet, maybe that multinational corporate land rush has something to do with these results?

The Government General Accountability Office just released a report on how many large corporations do not pay taxes yet have strong sales. AP sums it up:

(Please note, this blog has been updated due to a recent story in the Financial Times)

Greetings folks, welcome to another edition of Manufacturing Monday. Sorry about last week, it's normally my goal to have a new edition out on the first day of the week, but sometimes life can be unpredictable and throw you a curve ball. Well, several interesting things this week ranging from manufacturing activity to California looking to gain Tesla's plants.

One of the more amazing spins of the day is how the term diversity has been cast to mean global labor. The original term was for United States Domestic diversity. In other words, giving equal opportunity in a nation to all of her citizens.

Well, there are now damning reports coming to light on what is happening to a large segment of the American Professionals and that is women.

The Joint Economic Committee of Congress released a report entitled Equality in Job Loss: Women Are Increasingly Vulnerable to Layoffs During Recessions.

According to the JEC:

There is a fundamental problem these days with economic policy - US corporations have run amok. No longer do they act in the national interest or even give a pretense of being good national corporate citizens. It's all about profits, maximizing profits. In fact, we are told that is a corporation's only responsibility. But is that really the case or have we been spun a lie so long and often we believe it to be true without question? How does the United States align it's Corporations to the interests of the nation?

In a recent House Science Subcommittee hearing, American Decline or Renewal? – Globalizing Jobs and Technology, some these fundamental questions of corporate governance were addressed.

We've heard a few buzz words on the campaign trail about green collar jobs but what exactly is behind the rhetoric?

Green For All is a nonprofit looking to create a green economy not only as a way to stop global warming, but also as a path to economic justice for the economically disadvantaged.

FANTASTIC! A multi-dimensional solution that would:

US investment initiatives certainly could create a new industry to bring about economic fairness, especially for US domestic diversity.

Alas, there is a hitch.

This is my second story about OPIC – OVERSEAS PRIVATE INVESTMENT CORPORATION – a Department of the United States Treasury. This one is based on the OPIC 2006 Annual Report. It contrasts my earlier report on OPIC 1999. Robert Mosbacher, Jr., CEO of Mosbacher Petroleum, is the new CEO of OPIC. Mosbacher Petroleum was skimming money off ENRON back in the 80’s. OPIC was giving money directly to the oil companies. Now banks are skimming money off the U.S. Treasury and lending it to the oil companies.