CBS 60 Minutes profiled one town near Purgatory mountain, Asheboro, North Carolina to show what's really wrong with the U.S. economy. It's not taxes, small government or big government, or even the deficit. The real problem are jobs going offshore, companies treating workers as disposable and the never ending race to the bottom on wages, global labor arbitrage.

This week before the election there is a lot of arguing about the slowest recovery America has ever seen. We went to North Carolina, a state that went for the president last time but is swinging toward Mitt Romney now. And we found the story of the economy in the death and life of Asheboro.

Asheboro grew up on manufacturing, its factories filled with generations of families who built their town near Purgatory Mountain. But in 2008, Asheboro was named one of America's fastest dying towns. The folks there were never going to quit, but they are still struggling. Why are we stuck somewhere between recession and recovery? No one better to ask than those who live around Purgatory.

The numbers CBS quotes are right. Below is the graph of U.S. manufacturing jobs and as we can see, they have been declining since 1980 and accelerated job losses started around 2000, the time the China trade agreement was signed. 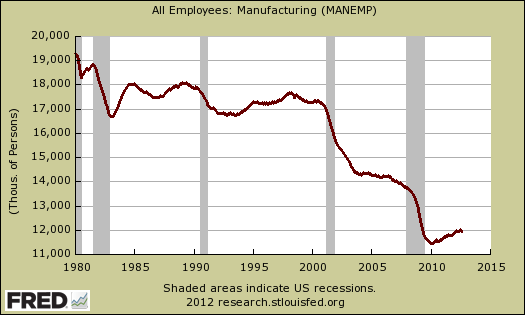 Notice how offshore outsourcing really isn't being talked about on the campaign trail along with bad trade agreements. While the statistics are stark for the U.S. economy and national economic interests, multinational corporations demand these bad trade deals, so the American people be damned, both parties will pass more of them.

Former South Carolina Senator Fritz Hollings said most job loss was due to offshore outsourcing. Repeatedly we have shown China has caused the loss of 2.7 million direct jobs.

We also have a lie there is a shortage of engineers, scientists, technologists and mathematicians. The issue is not retraining, we already have the skills and employers should be providing on the job training, as they have in the past. Think about Rosie the Riveter in WWII. Think she knew how to build airplanes, jets and tanks? Of course not. If employers really wanted the workers, they would train people on the job.

We can't blame smaller employers too much these days either. We allow both domestic and foreign businesses to buy up American ones, layoff all of the workers, dismantle the plant and offshore outsource the jobs. To see the dilemma of smaller U.S. businesses being forced to offshore outsource and use cheap labor or go out of business altogether, is another CBS 60 Minutes profile piece. Here is a guy making socks and due to pressures from his customers, he has no choice but to go abroad for manufacturing.

The last quote from the interview of the Berry's says it all. Can you think of a piece of legislation out of Congress in the last twelve years that was actually for the American people that wasn't demanded by teams of corporate lobbyists? Me either. Even financial reform was decimated by lobbyists and as bad as it is, most has not even been implemented.

The day we see Congress and this administration curtail and ban offshore outsourcing, stop the importation of foreign workers to displace Americans, deal with our trade deficit and really reform the U.S. tax code to create jobs in the United States will be a long day coming. We might even say a cold day in hell for America stuck on economic purgatory mountain.

At the end of the program, the people of Asheboro said they need to help themselves, but after losing thousands of jobs and replacing them with hundreds, it seems very difficult. When Congress begins to focus on the US, perhaps we will see the US we thought we knew. Hope it is not a cold day in hell.

While the focus was on the financial crisis, shuttering plants and moving overseas was and still is happening. The struggle new businesses go through to get started is intense. Pickles are fine but there is no comparison to large industrial materials manufacturing. Making iPhone covers while iPhones are made overseas isn't going to get the economy back.

After watching so many legislative sessions on C-Span, tracking bills in process and now Obama promising "comprehensive immigration reform" with ridiculous assumptions about the GOP "losing" therefore it will pass, I am sure we will see probably a year wasted with all sorts of guest worker increases and the flooding of U.S. markets generally with even more labor supply while existing jobs are shipped overseas.

Congress and Obama have instead made it worse, with even more trade deals where the resulting trade deficits are increasing every month. Beyond labeling China a currency mannipulator, most of Romney's policies will also make it worse.

They even bury the statistics and evidence, spin it, deny it while we see town after town empty out, decay, people thrown into poverty after yet another large employers shuts their doors and is dismantled or moves abroad.

The loss of jobs in the US has been devastating.
Pointing to 2008 is interesting to me.
The loss of manufacturing jobs has plummeted since 2000 as the graph shows above and is starting to crawl upward.
There are many sectors that are growing and looking back at what they faced at the end of 2008 when the avalanche started we are seeing some better trends.
These companies are making these decisions based on profit and labor costs.
Presidents don't own these companies American citizens do.
To say Obama has made it worse is not what these statistics are showing.
Is it perfect? No.
But to say it has gotten worse since 2008 is not statistically true. Some sectors like mills are hurting for sure but the guy answered that in the CBS clip. He did that.

Asheboro is home to a Walmart Supercenter Store.

In fact, there are currently 10 Walmart Supercenter Stores within 28 miles of Asheboro.

Altogether, there are 18 Walmart stores within 38 miles of Asheboro.

Very good point! There are thousands of towns where small businesses were wiped out due to a Walmart moving in. Hardware stores, groceries, clothing, fabrics, list goes on and on.

But the job losses the decimation of the area's manufacturing is real, although Walmart, demanding, through their monopoly status, wholesale prices where no one can survive, never mind make a profit, also has an indirect influence.

The most ridiculous 60 Minutes is on tonight. It's pure propaganda. We have some employer claiming that they can't "train" workers or find them and people who apply "cannot write a complete sentence". Beyond being a complete lie and an insult to the American worker, they are trying to demand workers "train" for four entire months, no pay, no job to earn....drum roll please...$12/hr.

Right. Let's see, demanding people "train" while not being paid for four months to have the "opportunity" to be "considered" for a hard work job at $12/hr.

That's not a worker shortage, that's a glut of bad, exploitive employers.

Pure comedic genius! Work for free? Sounds great, let me sign right up. They don't try to be funny, but they sure are.

Let's see, as soon as those calling the shots in DC and state capitals, corporate boardrooms, and HR all work for free without perks like vacations and bonuses, then maybe they can open their mouths. As soon as the Chamber of Commerce tools that sell us out daily give up their salaries and fly commercially in economy class for 30 hours to China and Malaysia, then maybe they can talk. Flying to sell us out isn't much fun when you're surrounded by folks leaning on you or snoring while you draft ways to f' the American workers over. Yeah, like these people don't bitch and moan if someone doesn't give them annual bonuses and cost-of-living adjustments. Like they don't spend company time planning vacations to Tahiti and endlessly moan when their six or seven figure salaries are "just too low." Like they don't whine at airports when the airline employees don't kiss their asses enough and, oh my, they have to wait in line for a few minutes more.

They have as much of a right to dictate that we work for free as I do to dictate that CEOs not eat caviar and drink champagne while they conduct "business" with their paid-for politicians. Can I tell them they can only buy 2 carat diamonds for their mistresses rather than 5 carats? Can I dictate that they mix with the hoi polloi and get rid of their gated houses and guarded SUVs? No? Then they need to remain silent because anything they say will just make them sound even more idiotic in the court of public opinion.

A quick glance at those trying to make our lives harder shows the tragedy that exists today. Are these folks blowing apart IQ tests? Are they curing cancer? Did they score 99.9% percentiles on their SATs while helping the homeless and little orphans? Did they help all those around them in every job they ever had while making sure they never stepped on anyone? Do they actually want ethical workers that have great ideas or are they in fact scared crapless by those that outthink them and outwork them? Now compare that to the "unskilled" folks out there. Served in military, or law enforcement, worked in health, EMTs, teachers, engineers, architects, pharmacists, and on and on. Great skills, great educational backgrounds, and great ethics (both in and out of the workplace). And these people suffering should work for free? Sick of the lies, sick of the bullsh*t.

The claim the cannot find people who can write is absurd. We have 33% of returning Vets unemployed and the black unemployment for vets is 40%. I'm fairly certain the military rejects people who cannot read or write and the requirements change but I believe one cannot get in with a GED currently.

It's like they cherry picked bad employers who want to pay $12/hr for skilled manufacturing, which is ridiculous.

Keep on repeating the skills gap lie, and someone somewhere will buy it.
I could put an ad in a paper tomorrow asking for people to work for free, drive their own vehicles to carry out work for me after they report to some office that is 50 miles from the nearest city, pay for their own gas, no benefits, and demand the people pass 5 interviews I will conduct with less than 2 hours notice beforehand. Also, I expect them to conduct bookkeeping for me along with marketing, warehouse operations, design and build my products, etc., work weekends and holidays on demand, and have at least a BA, but I'd prefer a Masters or PhD. Bilingual too, and if you know Portguese or Arabic or Mandarin or Farsi, that might help you. Oh, no one with families either because they drain time away from serving me and mine. And no one with too much debt because I want you to work for me for the love of the job, not for $ and I can't take a risk you'll jump ship for a paying job. Also, if you know anything about minimum wage laws or OSHA rules and regs, don't bother applying. And people that have experience leading teams or not serving like dogs for at least 2-5 years to some corporate boss somewhere immediately before, don't apply - I don't trust people that might question me or make me look bad. If you have more than 5 years of experience, don't apply - "overqualified." If you want to advance in your career, don't apply. And . . . look at that, I can't find anyone qualified. Damn skills gap! Help me Chamber of Commerce! Time to ship the job overseas.

it becomes truth. This is a corporate lobbyist trick, bar none. The media parrots these lies as well although I think most Americans caught on a long time ago. The problem is there is no choice in elections really.